The Conductor and Other Tales by Jean Ferry 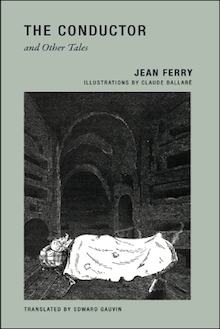 Jean Ferry (1906-1974) was a French screenwriter who worked with Cluozot and Bunuel, a minor figure in the surrealist movement and also an essayist known for his criticism on Raymond Roussel. His only book of published fiction, The Conductor and Other Tales, which appeared in 1953, was only translated in-full as of last autumn. The last tale, entitled “Commentary,” declares that “[surrealism] must dig ever deeper, far from the hideous grapnels that scrape the surface.” True to this thought, each tale keeps its distance from these “grapnels” which pull one back to the surface, and instead they linger somewhere between Kafka’s The Castle and Bataille’s Story of the Eye. At times transgressive, and at others with a Poe-like Gothic, the stories are also ironically mythical, creating a juxtaposition of nuance and beauty.

These 25 stories have transient, wandering elements in which characters inhabit a place somewhere between fact and fiction, history and illusion, dream and reality of an eerie murkiness. In “Rapa Nui,” the narrator describes coming to Easter Island saying, “I am not lying when I say I was trembling with emotions under a pale sun;” The line before says the narrator has only been to the island in dreams, and at the end of the story claims, “But I’ve yet never been and probably never will.” Rapa Nui is also the name of the Polynesian people who have lived there possibly over 1,500 years. The illustration before the story refers one to the Moai, or the statues created by the Rapa Nui between 1250 and 1500 C.E. These statues, still standing after five hundred years are testaments to a small civilization’s resiliency and permanence, its settlement of a place. They are dreams because of the way they have extended generations of memories, and like Stonehenge, still sit as monuments of humanity.

Other tales have darker tones, such as “Carbuncles” in which the narrator perceives a woman with infected boils as beautiful. He admits he doesn’t know what the carbuncles are, but describes them as, “proud and fiery,” and also, “perfectly suited to the woman I love.” The last line though shows the man knows the definition of the word, has been an unreliable narrator, and creates a volta to shift the reader’s worldview:

Carbuncles cannot be anything but the scarlet waves of her hair, or the words she sometimes utters, scabrous in her scandalous mouth.

It is a disembodied beauty rather embodied by the language of color, metonym, alliteration, and the Symbolist influence of hallucinatory poetics. One is reminded of Eliot’s line in The Wasteland about Tiresias awaiting a guest: “He, the young man carbuncular, arrives,” as if to signal for Eliot how the ugliness of youth and trade has formed in the early twentieth century. For Ferry, the man exists in an estranged world of love, only further enveloped by the nihilism of living through WWII.

A common theme among all the stories, transgressive or Gothic, is the ability to create uncanny elements out of society’s drudgery. The title story, “The Conductor” tells of a stoker on a train shoveling coal, the dirty experience of having it up to one’s ankles juxtaposed to watching the countryside or prairie. In an insightful moment describing passengers ringing the bell to stop the train, he says,

When you know them—the people clinging to the other end of the line—you wind up being able to tell them apart.

Although the line simply refers to the blue-collar nature of being a stoker and imagining the vocation for the people on, “the other end of the line,” it also enriches through vivid notions of body, flesh, muscle and bone. The narrator carries a loathing towards the passengers of the train, but the story’s tone and style carries an enchantment to it, similar to a Disney movie.

There is a ghostly, ethereal quality to each tale, which, as the collection progresses, become darker and phlegm-like. A tale not part of the original collection is of a man on a mountain expedition who loses his partner climbing an ice sheet, but seems to be only clinging a few feet off the floor in someone’s home. Each story shifts between admiration for spectacle, and violence or mortal danger within that spectacle. As any excellent story collection, the tension vibrates at unexpected moments, and the language expands, or crests at moments of insight to allow the reader’s creativity to see a new perception of their own imagination.

Ferry’s stories were a lost gem for many years, and carry hints of what Shirley Jackson would have been writing at about the same time in America. The collection is accompanied with essays by the translator Edward Gauvin as well as Raphaël Sorin (a renowned French editor). Also, the Goya-like illustrations by Claude Ballare are wonderful accompaniments to each tale. This new translation gives English readers access to an obscure French writer, who in his own words, says,

I’ve gotten lost in its labyrinth without ever managing to escape, to find the right argument that would relieve me, convinced at last that I’ve convinced you.

Jean Ferry (1906–1974) made his living as a screenwriter for such filmmakers as Luis Buñuel and Louis Malle, cowriting such classics as Henri-Georges Clouzot’s Le Quai des orfèvres and script-doctoring Marcel Carné’s Les Enfants du paradis. He was the first serious scholar and exegete of the work of Raymond Roussel (on whom he published three books) and a member of the Collège de ’Pataphysique.

Two-time winner of the John Dryden Translation Prize, Edward Gauvin has received fellowships and residencies from PEN America, the Lannan Foundation, the NEA, the Fulbright program, the Centre National du Livre, the Villa Gilet, the Banff Centre, Ledig House, and ALTA. Other publications have appeared in The New York Times, Tin House, Subtropics, Conjunctions, and The Coffin Factory. The contributing editor for Francophone comics at Words Without Borders, he writes a bimonthly column on the Francophone fantastic at Weird Fiction Review.

Matt Pincus was born and raised in San Diego, CA. He received a B.A. in English and World Literature from Pitzer College and is currently an M.F.A. candidate at Naropa University’s Writing and Poetics Program. He has written reviews for RainTaxi, Bookslut, Pank and the Volta 365 Blog.