The China Factory by Mary Costello 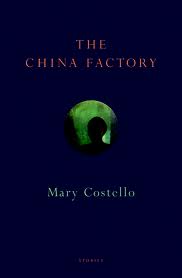 In a small scene in the very last story of Mary Costello’s most elegant collection, The China Factory, a retiring schoolteacher is being driven to the very party meant to celebrate her long career. She is a curious and wonderful fictional character in that her past includes a painful, transformative event that has shaped every single day of her present. So even in this simple drive from one part of town to another, we feel the presence of a powerful ghost. This schoolteacher is not eager to get to her party:

As they approach the hall she becomes agitated and asks him to drive on a little. They pass the hall and he turns off left towards the cemetery and the shore. He pulls over at the bridge, and says in a gentle voice that it can be hard, sometimes, to face people.

This last line, given so kindly to this character in her moment of need, could easily stand in as a summary statement for each of the twelve exquisite stories in The China Factory. Yes, we find ourselves agreeing and sympathizing with each new situation and set of characters, it is not at all easy, sometimes, to face the world.

Again and again Costello creates stories in which the human connections are both delicate and tender. Stretched thin and raw. Connections that contain an ache. Most of her characters are endowed with an almost painful empathy—attuned to the mysteries of their loved ones and bound to the intricate emotional structures of their own inner landscapes. In “The Patio Man,” a gardener is witness to his boss’s miscarriage and the event, clearly life changing for the woman, is as deeply afflicting for this quiet and watchful man. He is shaken to the core. While never neglecting the woman in the story, Costello actually explores the effects of this man’s empathy to a far greater degree. In “And Who Will Pay Charon,” an aging bachelor learns of a horrible event which occurred years before in the life of a former girlfriend. Someone he rejected because he couldn’t bear to connect himself with anyone. A lack of empathy, you might say. Their lives have been subtly but silently entwined for forty-some years but Costello shows us the moment their lives finally do touch. His sudden understanding of this woman’s life literally wrecks him:

I thought of the tiny drop of time, the second—the fraction of a second—when the spark of an idea is ignited in a criminal mind. The second that explodes into being and begets an act that changes everything. That changed her, and flattened her out, and spread her so thinly that the space between parts of her, the space between her head and her heart, between all her nerve endings, grew so vast that she became almost entirely empty and in no time at all, in a morning, she disappeared.

There are big events nestled into each of the collection’s twelve stories—the deaths of children and loved ones, infidelities, violence, terminal illness—but these larger incidents never seem cliché, never once seem like only grand ideas pulled out of a hat for fictional exploration. Each story is about a single person intricately imagined and explored. Their reactions to such big life events become almost a background; what Costello makes matter to the reader is the odd thought admitted to oneself just before bed, the drops of water slipping from the ceiling into a bucket, the effect of piano music on the radio during a drive home in the dark.

Costello certainly knows how to place a detail. In “Little Disturbances,” for example, an older man, a farmer, is awaiting the doctor’s word on a serious illness. The details of his day are a mixture of memories and mundane objects seen anew—thoughts of his daughter far away, insects and clouds in the field near his home, sunshine on a pot of marmalade. Images rendered appropriately for all he’s got to consider of a long and painful death. And yet Costello grants the reader a glimpse of his other option—a quick exit, the violence of an immediate withdrawal—when his neighbor shoots one of the farm cats, a “nuisance.” The episode is brief, hardly a few lines of text nestled within the longer story of this man’s day, but it exposes the man’s dilemma as well as his instinctive rejection of such metaphysical and physical violence.

He looks over the wall into the field. The cat’s corpse is lying on the grass five or six yards away. The head is flattened, the belly open with little twisted ropes of intestines and fur and blood. Flies are starting to swarm. He feels his legs grow weak, and the force of the bullet in his own middle. He moves his gaze to the paws, all four, tender, white. He closes his eyes for a second, lifts his face to the sun, as the bile begins to rise.

More than anything, Costello is interested in the complexities of human connection, the inexplicable attachments and resolutions made despite oneself. In “Things I see,” a woman cannot forgive her unfaithful husband but cannot “unlove” him either. But this isn’t a simple story—underneath it all is the delicate antagonism of differing personalities, contradictory wants and incompatible perceptions. Costello’s Ann is a woman whose fullness of feeling makes her raw, whose fullness of thought makes her paralyzed. The same goes for the young girl in “You Fill Up My Senses,” who is so touchingly attentive to her feelings of awe and wonder about the world and her family, especially her mother, that she remains constantly poised for grave distress. Costello carefully and lovingly reveals the dangerous tension inherent in these sensitive personalities.

The China Factory is Mary Costello’s first collection of stories. Despite its variety of subject and character, there is a wonderful consistency throughout the collection in terms of its compassion, curiosity and grace. These stories give very real glimpses—sometimes unsettling, sometimes cathartic—of ordinary people in their moments of self-discovery and trial.

Mary Costello is originally from East Galway and now lives in Dublin. Her stories have been anthologized and published in New Irish Writing and in The Stinging Fly. This is her first book of stories.