The Brothers by Asko Sahlberg 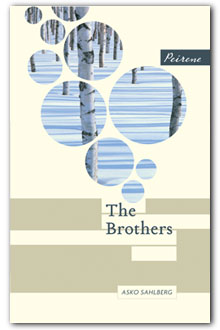 Peirene Press, a small London-based publisher, launched its contemporary European novella program in 2010 with a selection of three books grouped into what they called the Series of the Female Voice, featuring works from France, Catalonia and Germany. It then followed up in 2011 with the Series of the Man, composed of three novellas translated from the German, the Austrian and the Dutch. Peirene books are meant to be short and consumable; they are the literary equivalent of the aperitif—quickly devoured, flavorsome, intoxicating.

This year Peirene Press gives us the Series of the Small Epic, and the first of its three books, Asko Sahlberg’s The Brothers, is appropriately described on its overleaf as, “A Shakespearean drama from icy Finland.” This is condensed Shakespeare, trimmed of all but the dark heart of the drama. Sahlberg’s mini-epic gives us sexual power plays, violence, madness, grief, and that most Shakespearean of literary devices—surprise treachery.

The Brothers takes place on a small farm in Finland in 1809, where brothers Erik and Henrik have returned from fighting a war. The catch of course is that Erik and Henrik were not fighting for the same side. Family tensions pushed Henrik, the eldest son, to leave the farm and the woman he loved to his younger brother Erik, and strike off to make his fortune first in Turku, then Stockholm and finally St. Petersburg. By the time Sweden and Russia began fighting over Finnish territory, Henrik was in the wrong place. Of his fate, Henrik says:

How could I have known there would be a war? It never occurred to me that this godforsaken land would drive great rulers mad. I did not consider that even a peasant nation pays taxes and is good for cannon fodder, that its barren fields and swampy forests are as well suited to become part of the domains of kings as any wilderness or desert.

Henrik’s reference to class, wealth and power dynamics can be easily applied to the novella itself. There is a smaller war being waged on the farm along these same lines and a tight focus on master vs. servant. The novella stages its main clash between the two brothers, an archetypal pairing, yet the question of power is explored between all of the different characters. Who controls whom? Who is loyal to whom? These questions are posed through a series of different perspectives—sexual, familial, political and economic. By playing with these hierarchies of faithfulness and power, Sahlberg creates a fascinating palette of interconnected human feeling. His stage is small but its emotional depth both complex and riveting.

One aspect of the novella’s power comes from the way Sahlberg weaves the story together using the different characters’ voices. The Brothers opens with a description of Henrik returning to his home after many years away, but the passage is told in the voice of The Farmhand as that older man watches the younger approach the house:

Henrik stands tree-like in the middle of the yard. He takes his time, stares at the house. The windows glimmer with light, muffled by the thick curtains. The house looks bigger than it really is, silhouetted against the forest, magnified by the dark. He knows its precise size, of course, and how much grief and disappointment it holds. […]

I sit here, breathing fast. The wind pokes the cabin walls. My nose tells me the fire is dying. My eyes see nothing, for they have spied another kind of dark.

The war has been waged, but here we may yet have corpses.

Once The Farmhand, whose name the reader never learns, has finished, then it is Anna’s turn, the woman that both brothers loved, followed by The Old Mistress (the boys’ mother) and then Henrik, then cousin/servant Mauri, then Erik, and slowly, each character is given space to speak. The voices move between the present and the past, circling around the events that brought them all to this very moment on such a cold, dark farm in the Finnish countryside. Each character bears a series of smoldering injuries, hurts that burn with enough dark heat to set this icy landscape afire with their anger.

Despite the historical setting, The Brothers feels extremely contemporary. Not in the sense that the book bears any anachronism, but because of its embrace of such a timeless, even biblical conflict, as well as the spare purity of Sahlberg’s prose. He packs a lot of conflict and interaction and history into this slim book, but all the drama and quarrel is given to the reader so gently, so gravely. This is whispered rage. Devastating and dark. But always quiet.

Also, Sahlberg has endowed his characters with the ability to express their bleakness in uncommon terms:

As the years went by, the boys grew and Arvid became so sickly and so bent that he began to resemble a big-boned bird pecking at the ground. I took up the habit of moving all the yesterdays and tomorrows discreetly to one side. [The Old Mistress]

He has said sorry this way before. I twist my other arm round his waist. He does not move. He is a tree, abandoned by a forest that has crawled off and left him behind to be battered by the winds. [Anna]

My destiny is to roam the world, superior in my abilities and above all in my will, but forced to concede that inferior abilities and wills again and again get to be in the right place at the right time. They have been granted a dower and they redeem it before they are widowed by the death of their opportunities. [Henrik]

Despite the archetypal nature of The Brothers, and the related risk that we have seen all this too often before, this appropriately labeled Epic involves a series of small surprises that pack a terrific punch. Sahlberg uses these surprises to explore power dynamics and upset established relationships, eventually forcing a new alignment and obliging all that buried rage to find vent.

Asko Sahlberg has acquired a fame in Finland that has yet to be replicated in the English speaking world. He published his first novel in 2000 and has written steadily since then, completing his ninth work, The Brothers, in 2010.

Emily Jeremiah and Fleur Jeremiah unite as a multi-lingual mother and daughter translation team. Emily has an MA in Creative Writing and a PhD in German Studies. Fleur, her mother, is Finnish. They have co-operated on translating the poetry of Helvi Juvonen and Sirkka Turkka.

Michelle Bailat-Jones is a writer and translator living in Switzerland. Her fiction, translations and criticism have appeared in various journals, including Hayden’s Ferry Review, Ascent, The Kenyon Review, The Quarterly Conversation, Cerise Press and Fogged Clarity. She is the Reviews Editor here at Necessary Fiction.
Share This