The Briefcase by Hiromi Kawakami 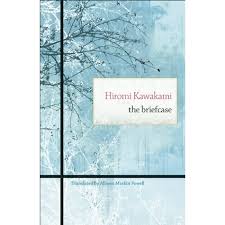 On page two of Hiromi Kawakami’s The Briefcase, when narrator Tsukiko is explaining how her story begins and how she became re-acquainted with her former teacher, a man who will only be “Sensei” in our story, she also very subtly establishes a parallel between what is about to happen and the first lines of Sei Shonagon’s The Pillow Book:

Sensei had always held an eraser in his hand when writing on the blackboard. He would write something in chalk, like the first line of The Pillow Book by Sei Shonagon: IN SPRING IT IS THE DAWN THAT IS MOST BEAUTIFUL. And then, not five minutes later, he would erase it. Even when he turned to lecture to his students, he would still hold on to the eraser, as if it was attached to his sinewy left hand.

Overall, The Pillow Book and The Briefcase have very little in common. But if we follow Shonagon’s first diary entry* a little further, if we let her finish out her observations on the seasons, there is a line to be drawn between them and Kawakami’s deceptively simple story of a summer/winter romance.

In spring it is the dawn that is most beautiful. As the light creeps over the hills, their outlines are dyed a faint red and wisps of purplish cloud trail over them.

In summer the nights. Not only when the moon shines, but on dark nights too, as the fireflies flit to and fro, and even when it rains, how beautiful it is!

In autumn, the evenings, when the glittering sun sinks close to the edge of the hills and the crows fly back to their nests in threes and fours and twos; more charming still is a file of wild geese, like specks in the distant sky. When the sun has set, one’s heart is moved by the sound of the wind and the hum of the insects.

In winter the early mornings. It is beautiful indeed when snow has fallen during the night, but splendid too when the ground is white with frost; or even when there is no snow or frost, but it is simply very cold and the attendants hurry from room to room stirring up the fires and bringing charcoal, how well this fits the season’s mood! But as noon approaches and the cold wears off, no one bothers to keep the braziers alight, and soon nothing remains but piles of white ashes.

The Briefcase would be a different story, indeed, if we were dealing with the pure fresh face of spring and the gentle age and wisdom of autumn. No, both Tsukiko and Sensei have moved beyond such easy seasons. Thankfully so, because Kawakami is certainly not concerned with easy romance or standard complications—the story she tells has more abrupt curves and sharp angles than straight happy lines, it is more focused on the awkward movements toward understanding, the unexpected connections and careful revelations.

Without pushing this idea too far, there is also a nice parallel between Shonagon’s descriptions and Kawakami’s characters. Tsukiko as summer has nothing to do with the bright and carefree moments of a summer afternoon, but she is easy to frame with the dark of night, the glare of a moon (the tsuki in Tsukiko means moon) and falling rain—this is about the “moment-after” of summer, when the day is done and the night—however good or bad—will feel long. And Shonagon’s description of winter as applied to Sensei provides a neat bit of foreshadowing in its movement from a cold, sharp and industrious winter morning to that haunting image of forgotten white ashes.

On the surface this a book about a woman in her late thirties and a man in his seventies and the strange romance in which they find themselves engaged. That word romance is a little misleading, because what happens between Tsukiko and Sensei is far more serious than what that simple word might lead one to believe. The Briefcase is less a study of an unconventional relationship and more a query of what happens when two resolutely lonely individuals find that when they are together, their loneliness is eased.

Contemporary Japanese fiction is fascinated with loneliness and what loneliness does to the psyche. In this sense, The Briefcase is a part of a larger genre of fiction. Kawakami, however, while not shying away from the darker aspects of loneliness and what it inflicts on a person, refrains from making her characters marginal. Both Tsukiko and Sensei are functional, polite, and to some extent even social beings, and aside from rather impressive drinking abilities, their emotional isolation is nearly undetectable.

Until they coincidentally order the same meal at a local izakaya and hazard a conversation—a profound and often wordless conversation that will continue in fits and starts, including some embarrassed or angry pauses, for quite some time.

The Briefcase has a very slender narrative frame: Tsukiko is our narrator and she neatly opens the novel in such a way that we know we are about to read an account of her relationship with someone she calls “Sensei,” and then she closes it again at the end, summing up the timeline involved and solving one of the novel’s more peculiar mysteries—why did Sensei always carry a briefcase and what was inside. Mentions of Sensei’s briefcase throughout the novel are actually quite rare—in fact, without the title as a first clue (the original Japanese title is only slightly more explicit: Sensei no Kaban, or Sensei’s Briefcase), some readers might not even follow the thread, and it doesn’t force itself as a theme until the end when Kawakami does do something meaningful, however slight, with the idea.

The narrative style—which is an easy straightforward first person—in The Briefcase is worth mentioning mainly because this is a translation, and translations tend to invite certain comparisons and criticisms. I think it is fair to say that readers of contemporary English-language fiction generally expect our first-person narrators to be polished storytellers, and if they are not, the reason for their lack of storytelling skill is an explicit part of the narrative.

Japanese fiction doesn’t have quite the same relationship with its first-person narrators and Tsukiko is a good example of a commonly-seen type; she is an average individual, with an average appreciation for poetry and beauty, an average interest in lyricism, and she has average storytelling skills. In other words, she is a real person and she is not a writer. Her voice is that of an ordinary woman, the way she tells us her story isn’t perfect (only from a strictly polished literary perspective), and her expressions are not devoid of certain clichés. Through this choice, however, Kawakami (who is an accomplished writer and endowed with plenty of lyricism and style—indeed, much of her other writing favors a surrealist style) reinforces the novel’s strict realism. This makes the book an easy read, but don’t be fooled by the simplicity of Tsukiko’s focus and expression—her story is worth paying careful attention to.

Going back now to those early lines of the novel and that first image of Sensei with the eraser in his hand, an image that comes immediately to Tsukiko’s mind as she starts speaking to him at the izakaya when they first meet again after so many years, it strikes me how much this image resonates throughout the book. Here is Sensei poised to impart something beautiful, something profound, and just as quickly he is wiping it away, but as long as he grips that eraser it cannot vanish completely, it hovers about him and in the room. This vision really speaks to the kind of loneliness Kawakami is addressing in the novel and how fleetingly it may be soothed, how subtly it lingers.

*These lines are from Ivan Morris’s translation (Columbia University Press, 1967)

Hiromi Kawakami is the author of several novels and short story collections. She is the recipient of the Pascal Short Story Prize for New Writers and the Akutagawa Prize. Her stories and essays are widely published in Japan, where she taught biology and is now a member of the Science Fiction Research Association. She lives in Japan.

Allison Markin Powell is a literary translator and editor. She has worked in the publishing industry for more than a dozen years, and has translated works by Osamu Dazai, Hiromi Kawakami, and Motoyuki Shibata, among others. She was the guest editor for the first Japan issue of Words Without Borders.

Michelle Bailat-Jones is a writer and translator living in Switzerland. Her fiction, translations and reviews have appeared in various journals, including The Kenyon Review, Hayden’s Ferry Review, The Quarterly Conversation, Cerise Press and Fogged Clarity. She is the Reviews Editor here at Necessary Fiction.