The Brain Harvest by Ken Nash 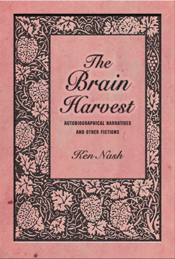 The best job I ever had was making pizza and serving ice cream at a gas station in Dickeyville, Wisconsin, population 1061. This was before BP or Mobil or whoever owned everything and it was still possible to hide in a corner of the Midwest and not be too wired into a corporate blueprint. I liked the pizza and ice cream, which was free when I decided not to pay for it—which was always—but I liked the people I met even more.

None of these people stuck around. A few of them are dead. They came in for cigarettes and ended up telling me stories about estrangement and coincidence and happenstance, some of which I didn’t always believe.

What this really taught me was the same thing that The Brain Harvest by Ken Nash taught me: precision and compression and crazy hope, how if we zoom in far enough in anyone’s life, the absurdities reveal a depth of honesty and wonder. There’s something amazing in everyone’s life, something historic in everyone’s town.

The stories in The Brain Harvest don’t stick around, either. Most of them are only a few pages long—it’s a small book in all physical dimensions—but they do what those people did, figuring out the fastest and most compelling way of telling their story.

My roommate Lawrence had an imaginary girlfriend. I’d invite him to a party or some movies and he’d say, “I can’t. I’ve got to go meet Lenka.” Sometimes we have friends here, visiting from the US. They’re often curious about our love lives, wanting to know some good gossip. So Lawrence would tell them about Lenka.

Nash’s tone varies between colloquial and a sweet attempt to break away from the colloquial. Some of his descriptions run a bit too far into a sort of pile up, and the stories may have been better served if these were trimmed, but even that occasional saturation of adjectives lends itself to the scenic quality of the stories, as if there’s a wonderful everyman personally delivering every tale.

And these are certainly tales. The title story is quite literal, the harvesting of brains as a tough-but-necessary job both in monetary and spiritual terms. “Three Sisters” tells of the performance of the Chekhov play of the same name as performed by chickens, to the bewildered entertainment of a small town. The garden in “The Cello Garden” is an actual garden that grows an orchestra. Nash is more than apt at presenting the bizarre as normal and honing in on the real issues, meaning the people involved.

When Ronald Reagan was governor of California, he had a torrid affair with my mother. He had been married to Nancy for three years at the time he met Mae, my mother. Nancy was a difficult person, my mother said. So was my mother, but in a different way.

While Nash’s pacing and concepts are truly expert, he doesn’t always hit his mark—a feat that would have been awe-inspiring, considering that there are over thirty stories in the collection. “The Book Group” isn’t much more than an excuse to make fun of book groups and the annoying titles of their books, and while I don’t disagree with the sentiments, it hardly needs to be a story. “The Day I Met My Parents” is also a bit slight, and despite having all the parts necessary for an interesting story of devotion and familial ties, Nash’s dedication to terseness in the collection works against him by cutting the legs off the story just as he appears to get going.

Despite these missteps, The Brain Harvest is an enjoyable read. As is the case with any collection made up of so many small parts, I’d suggest reading it in small doses, in slow motion. Take two weeks and finish it off in those tiny moments before bed or in the morning. Sneak it into the middle of the day on a regular basis. Then go back and shotgun it all at once, see what sticks.

It was later summer, the start of the brain harvest. The temporary workers—many having crossed the border from Mexico, leaving family and friends behind—were out in the fields hacking brains from the vines and stacking them into the back of sun-faded Ford pick-ups, ready to be rushed off to universities in time for fall classes.

When I think of this collection, I think of the large premises upon which these stories are built—a woman tells a man that Mao is still alive, a man thinks back to a girl he loved as a youth—and connect them to those stories the people told me in my gas station days. But here’s the thing: most of the stories those people told me are lost. I can’t remember. It’s that simple. Like I said, I remember the estrangement and coincidence and happenstance, but the people and what they did? Nothing.

With Nash’s collection behind me, I can’t recount every individual string from the few dozen stories, not like I can with an episode of Seinfeld or the guitar solo on a KISS song. It seems unimportant, though. Nash is a storyteller in the most prime of forms, and years from now, with this collection far, far away, I won’t need the characters and their situations as much as I’ll need what I’ll actually have, which is the residuals.

They are this: open wide and seek the impossible, for we are all incredible.

Ken Nash is the founder of the Alchemy reading & performance series in Prague. His short fiction has appeared in The Prague Revue, Bordercrossing-Berlin and X-24.

Ryan Werner is a janitor in the Midwest. He is the author of the short short story collection Shake Away These Constant Days (Jersey Devil Press, 2012). He runs the small chapbook press Passenger Side Books, is on Twitter @YeahWerner, and has a website named www.RyanWernerWritesStuff.com.