The Book of Happenstance by Ingrid Winterbach 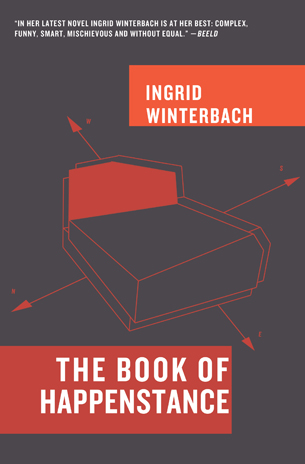 The Book of Happenstance is a novel uninterested in epiphany: murders are left unsolved, relationships, their wounds and their possibilities, remain in that condition, and precious things stolen by thieves are never recovered.

Helena Verbloem, the narrator, is a lexicographer assisting a renowned scholar, Theo Verway, on a project to catalog, to rescue, obsolete Afrikaans words from their death march towards the oblivion of un-use.

Events do not unfold in the novel so much as occur in simultaneous vibrations, because Winterbach’s first-person present tense is a marvel. We learn on the first page that Theo is dead. What happens in subsequent chapters is in the past—those things that occurred before his murder—though they are also revealed in the present tense, and the same goes for dreams dreamt by the narrator, the memories she relives and the history of the origin of organic life in the world.

In an interview in 2009, Winterbach said that her writing is “interested in contrasting a rational, scientific discourse, with that which is less easily circumscribed—human affairs.” This concern, this “tension,” as Winterbach explains in the interview, “between what can be known rationally, and what cannot be explained” throbs emotionally within the narrator’s distanced, flat tone. The contrast in The Book of Happenstance between the Big Bang Theory and love, memory, and murder hinges upon the notion of coincidence, which seems to live in both the scientific and human sphere in similar fashion. It is this notion of coincidence and what it brings together to converge, this generative tension, in which the novel exists.

Helena’s boss, whom she might love, is murdered. Her apartment is robbed of shells for which she has a deep, emotional affection. In the subsequent investigation of this theft, another man is discovered to have hanged himself, a man whose brother may or may not be part of a gang who participated in the theft, and the constable in charge of the investigation is transferred, perhaps because he revealed too many confidential details of the hanging to Helena, though we never truly know. There’s also a possibly pedophilic scientist, late-night phone calls from a character whom Helena never really remembers, the burgeoning friendship between Helena and Sof, a woman she works with, and re-enacted moments from the failed relationships of Helena’s past.

Throughout all of these happenings, there is the cataloging of words. These words: when Hugo, the possibly pedophilic scientist, mentions that it was language that structured consciousness and the “development of self-reflection,” we are left to wonder: what then, of Helena and Theo’s catalog? If language exists in part to help us know ourselves, what of the words we no longer use? Where do the parts of ourselves, those parts we would use these words to describe, disappear to when the words disappear?

Helena and Theo spend important sections of the novel cataloging words that begin with D. Take, for instance, droef (sad), for which, Helena remarks, there are “so few words for an emotion with so many shades.” And yet within the words of that same letter, “they are endless … the words formed with death.” All the different ways we try to find the language to describe it: in a language that is enacting it. What are all the ways language fails, and the consequences of this failure, if language is responsible for our consciousness?

However, it is exactly with language that Helena can explain how this occurs, when she describes Theo:

A man with an enviably comprehensive knowledge of words—a man who knows everything about words and their origins, of their genesis, their ascendancy and their decline—and so incapable of having them serve him.

This is all very serious, of course, but there’s very much the feeling of play throughout the novel. Take the use of parenthetical punctuation: The Book of Happenstance was initially written in Afrikaans, then translated by Winterbach and her brother, Dirk, into English. As Helena and Theo discuss the words they are cataloging, Daderang, for instance, the English equivalent is given in the form we expect: “(the urge to do deeds).” But these particular punctuations work in so many other ways as well: they can give the feeling of a translator’s alternate English choice for the word in its original language, which changes the word:

What would the appropriate (decorous) words be for the feelings that rise up urgently in my throat from the region of the heart?

Or they can work as a kind of secret for the reader only: when Theo asks Helena what her novel is about (oh yes, Helena is a novelist, the many sidetracks the novel hints at are never ending), she says only:

The outlines are still tenuous … the storyline is still undefined.

Yet in the next paragraph, in the parenthetical, she reveals everything to the reader:

(A young woman emerges onto a red cement stoep. She is wearing a floral dress. She is in love. She is about to be married. She is filled with anticipation about the new life that she is about to embrace. She wants to leave the sorrow of the past behind her. She has set her heart on fulfillment. She believes that this fulfillment of the heart is possible. She wishes only to make good the tears, the despair, and the uncertainty of the past.)

This synopsis is melodramatic and personal and so of course must be hidden. Though, of course, it’s not, as it’s written.

When Hugo tells Helena that RNA works with DNA, we read: “(That I like, the fact that a messenger, a mediator, is necessary.)” Here the parenthetical is not said aloud, but is not secret either.

Or when Helena and Sof go to investigate her missing shells, the parenthetical changes yet again: “Sof and I have decided to use false names. (That we have to deceive these people like this!)”

So just as the origins of life escape us, just as language often escapes the specific meaning we wish to burden it with, so too does the work we expect of punctuation marks. Sometimes everything is usefully futile isn’t it? Not for progress, but for presence.

Then there’s the stolen shells. Helena describes their importance early on:

Meditating on the shells is one way of centering myself and lowering my levels of anxiety. These shells are a source of infinite beauty and wonder to me. I can rely on their beauty to divert me from vexation and discontent.

She will go on to describe what she sees as their fragile, delicate perfection. Yet, during her search for them, she and Sof create ridiculous false identities to interview the family members of a dead man who may have taken them (he hasn’t); when she’s taken into a house and introduced to the gang members whom she’s told may be responsible for their disappearance (they haven’t taken the shells either, and even better, these gang members speak like Rosencrantz and Guildenstern), when asked why she wants them back so badly, she says: “To gain time, fucker.” In what should be a moment of despair, I laughed. Even though I wasn’t sure why.

Nothing is the way it is “supposed to be” in this novel—it invalidates my expectations of plot, it provokes reactions I choose to just “let be” rather than drill beneath, it asks questions of words that it answers with more words. Perhaps this is what The Book of Happenstancewas always meant to do. As Helena explains similarly:

Simply because I (and all other things) exist, I think that my existence is inevitable. That everything is the way it is supposed to be. But that is, of course, not so. In evolutionary terms that is the first of many erroneous assumptions.

Ingrid Winterbach is an artist and novelist whose work has won South Africa’s M-Net Prize, Old Mutual Literary Prize, the University of Johannesburg Prize for Creative Writing, and the W.A. Hofmeyr Prize. To Hell with Cronjé, an earlier novel, won the 2004 Hertzog Prize, an honor she shares with the novelists Breyten Breytenbach and Etienne Leroux.

Jess Stoner’s novel, I Have Blinded Myself Writing This (Short Flight/Long Drive Books, a division of Hobart), will be published in February 2012. Her choose-your-own adventure chapbook of poems, You’re Going to Die Jess Wigent (Fact-Simile), came out in the summer of 2011. Her prose and poetry have appeared in Alice Blue Review, Everyday Genius, Caketrain, Juked, and many other handsome journals. Jess currently lives in the sweat and brisket of Austin.