The Bitter Kind by Tara Lynn Masih and James Claffey 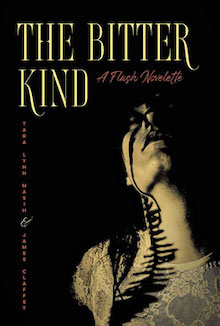 To write is to be isolated, or so goes the prevailing wisdom. Despite the feedback from teachers and peers; despite the conferences, workshops, and retreats with their offerings of solidarity and commiseration; despite the author/editor relationships without which many wonderful books would not exist — deep down, most of us recognize that most of the time, the words on the page have sprung from a single mind. “Writing is something you do alone in a room,” wrote Michael Ventura in 1993. It is difficult to dispute the fundamental truth of that statement.

If isolation is the writer’s default, The Bitter Kind by Tara Lynn Masih and James Claffey offers an intriguing alternative: a true collaboration, woven of two voices, each author contributing a character who appears in their earlier work. From Masih, we get Brandy, an orphan from the mountains of Montana; from Claffey, Stela, the daughter of a ship’s captain who dreams of escaping her abusive father’s household in Alabama. A self-styled “flash novelette,” the book alternates between its protagonists every few pages, charting their separate but parallel trajectories from 1942 to 1982. The project has the feel of a literary experiment, the sort of thing one might start with a friend and later abandon once the headaches set in. How to come up with the concept? How to balance individual styles with the need for a coherent tone? How to invite compromise into an arena where one is used to operating alone?

Fortunately, Masih and Claffey are superbly well-matched as authors. The result of their partnership is a book that transcends experimentation for experimentation’s sake, seamlessly narrating two lives as they drift toward a powerful convergence.

The Bitter Kind covers forty years in sixty-odd pages, meaning the protagonists’ stories are deliberately spotted with mysteries and gaps. We spend a good amount of time in the red-bricked house in Tuscaloosa where Stela grows up, trapped but spirited, plotting murder schemes against her father that fear and piety prevent her from carrying out. Later, she goes to college and falls for a handsome rogue named Burdine: “When she buries her face in his neck at the bar she detects the familiar scent of bay rum in his hair and can’t get the picture of the Captain out of her mind.”

The sense memory proves to be an unfortunate omen for the marriage to come. Indeed, the shadow of the Captain stretches over all of Stela’s marriages, three of which are cursorily summarized in the space of a short paragraph. This accelerated pacing seems to mimic Stela’s own thought process. To her, the failed relationships fail to leave much of a mark. In their aftermaths, we find her always alone, “her hands pulling at the vestiges of last year’s tulips, emptying out the planting box, clearing the old growth to make way for the new.”

Brandy, too, lives an isolated life, though his is marked by supernatural encounters. His most stalwart childhood companion is the spirit of a wolf killed on the night of his birth. As an adult, he accepts a job as the caretaker for a real-life ghost town. It’s lonely work that suits him well: “He grows accustomed to the old portrait photographs that watch him eating. Every sound is amplified — the crickets, the grouse beating its wings against the ground, the prairie wolf howling, his fork against the plate.”

In many ways, Brandy’s relationships with the living pale in significance to those he forms with the dead. Lasting attachments remain elusive. “Retreat,” writes Masih, “is what Brandy does best.” He is an outsider within his extended family after his parents die. His marriage quietly disintegrates when he realizes his wife won’t be returning from her girls’ night out. The bond he enjoys with the ghost of a schoolteacher named Annabelle is rich by comparison: “She is not beautiful, his ghost, but he loves her freckled face, strong forearms, wispy red hair, and penetrating eyes that force him to care.”

Brandy’s and Stela’s passages maintain a stylistic consistency that allows their narratives to range far and wide without feeling overly disparate. Both authors are masters of panning across years, then zooming in on the smallest details, building a sense of intimacy with two characters who start to seem more and more like kindred spirits. They are both lonely. They are both haunted — Stela by the memory of her father and Brandy by his literal ghosts. They both leave home in search of something better: community, opportunity, belonging. Neither finds quite what they expected, yet neither is miserable. One of the greatest strengths of the book is how it renders the ambiguous spaces between joy and sorrow, hope and regret. Each time Stela leaves another unhappy marriage, we spy the sparkling shard of a new beginning. Each time Brandy experiences the beauty of the natural world, we wonder if his life is truly as empty as it seems.

Nevertheless, readers will sense early on that the protagonists are destined to meet. Like the collaborative impulse that made the project possible in the first place, the plot hinges on this coming together. When it finally happens, the impact feels seismic. The structure changes: the point of view alternates in rapid succession, lending an urgency largely absent from earlier, more introspective sections. Though the book itself ends on a question, there is a resounding sense of wholeness and completion, as if every detail in the preceding pages has been carefully seeded to lead us to this final scene.

The Bitter Kind is easily consumed in one or two sittings, but readers may wish to dwell a little longer in the worlds of Brandy and Stela. A tremendous amount of plot lives within these pages. The prose is packed with lyrical richness. The white space provides a welcome exhalation in which to pause and contemplate the latest changes in the characters’ swift-moving lives. In other words, Masih and Claffey have done here what flash fiction does best: create a story that is slim in pages but not in emotional heft.

Tara Lynn Masih is editor of The Rose Metal Press Field Guide to Writing Flash Fiction and The Chalk Circle (both Foreword Books of the Year), author of Where the Dog Star Never Glows, and Founding Series Editor of The Best Small Fictions. Her flash has been heavily anthologized in such collections as Brevity & Echo; Flashed: Sudden Stories in Comics and Prose; Nothing Short of 100; and in W.W. Norton’s New Micro: Exceptionally Short Fiction. My Real Name Is Hanna, her debut novel, was a National Jewish Book Awards Finalist and winner of a Julia Ward Howe Award.

James Claffey grew up in Dublin, Ireland, and currently lives in California. His collection of short fiction, Blood a Cold Blue, is published by Press 53. He is currently putting the finishing edits to a novel set in 1980s Dublin. His short fiction piece “Skull of a Sheep,” which first appeared in the New Orleans Review, is in W.W. Norton’s _Flash Fiction International. His flash fiction “Kingmaker,” which first appeared in Five Points: A Journal of Literature and Art, also features in W.W. Norton’s New Micro: Exceptionally Short Fiction. “The Third Time My Father Tried to Kill Me” was published in The Best Small Fictions 2015, and he was a finalist in The Best Small Fictions 2016. His work has appeared in numerous journals and magazines, and when not writing he teaches high school English in Santa Barbara.

Tessa Yang (@ThePtessadactyl) has published fiction in The Cincinnati Review, Hayden’s Ferry Review, and Joyland Magazine, and book reviews in The Masters Review and Indiana Review. She teaches creative writing and lives in upstate New York, where she is at work on a novel. Find her online: www.tessayang.com.