The Best Book in the World by Peter Stjernström 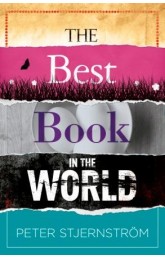 Peter Stjernström’s latest novel The Best Book in the World is something of a chimera: as well as the story of what might happen when two authors compete to write the best book in the world, it’s also a satire of the publishing world and an exercise in metafiction.

The plot is relatively straightforward. One boozy evening, Titus Jensen—an ageing, alcoholic novelist—and Eddie X—a young, universally adored romantic poet—get together and come up with the idea to write

…[a] single book which is a bestseller in lots of different categories! Crime, cookbooks, diet books, management literature, DIY books, self-help, how to be happy, everything all at once!

Titus takes the idea to Astra, his editor, who promises to publish it so long as Titus deals with his drinking and obeys a strict work schedule. In fact, she goes so far as to give Titus a computer with a breathalyser lock and a program which deletes his work if he leaves it untouched for more than a few days. Much of the book is taken up with cataloguing Titus’s growing strength and confidence as he overcomes his cravings and writes the transparently terrible manuscript of “the best book in the world” which is excerpted throughout the novel.

Stjernström gives this simple story an additional layer of complexity by wrapping it up with a metafictional flourish: the story of Titus’s quest to write the best book in the world is itself being written by a novelist called Titus Jensen, who appears only at the very beginning and end of The Best Book in the World. The unnecessary complexities of both Tituses’ plots seem like a tongue-in-cheek pastiche of the pretensions of literary novelists, an impression strengthened by Titus’s address to book reviewers in his first draft:

I demand of you, you pathetic clown of a reviewer, that you read this magnificent book with the most open attitude that your withered and poisoned brain is capable of. May you burn in hell if you are incapable of appreciating the magnificence of this innovative work of literature.

Titus’s contrarianism is one of the novel’s chief joys, giving the reader a believable picture of literary Sweden, as perceived by a bitter writer well past his prime. Indeed, Stjernström’s powers of characterisation and description are extremely sharp: take the Stockholm librarian Christer Hermansson, “a prototype of a good-looking man that never left the dream factory”, Titus’s face, which is “marked by years of harsh weather in the Stockholm bars”, or another character who when he speaks displays “a quiver under his chin like that of a turkey”.

Many outwardly sophisticated characters are unmasked by such social missteps, like the art teacher who starts telling her young class about Dali’s “The Enigma of Wilhelm Tell” but ends up talking about nymphomaniacs and cannibals, or the character with Tourette’s whose characteristic expression—translated as “cock in your ear!”—masks a much deeper secret. Even the suave romantic poet Eddie X cracks at one point, claiming that Titus has stolen his book “sentence for sentence, word for word, letter for letter”—almost in the manner of the great Borges story, “Pierre Menard, Author of the Quixote”.

These bizarre moments draw additional humour from the dryness of Stjernström’s prose, which Bradbury’s translation seems to capture well, as do the few idiomatic phrases which sneak through: a woman “devours men like builders devour burgers”, a selection process “fell between two stools”. When Stjernström allows himself a rare moment of earnestness, his prose sparkles:

The Golden Otter, two kilometres. She remembers that motel, her family used to stay there when she was little and they were on their way home from a motoring holiday down in Europe. They would eat salmon with dill in white sauce, buy a stick of peppermint rock and remember that it was nice to go abroad on holiday, but it was even better to be back in Sweden. They’d sit on the terrace and look out across the long narrow lake, talk about the mythical island – Visingsö – where her father believed that kings had lived in bygone ages.

A final irony is that this book, purportedly centred on that almost mythical beast, the bestseller, is most unlikely to be one itself. Despite the commercial success of novels like Atonement and Cloud Atlas, nested stories—and metafiction more generally—have a disconcerting habit of selling poorly. It’s not hard to understand why readers avoid such writing. Indeed, the narrator himself points out the problem:

…it’s all so bloody weird… will the readers really understand? There are so bloody many meta-levels… It is almost as if I myself get confused. An author writes a book about an author who in actual fact is another author. And that author is also writing a book and competing with another author who wants to write the same book. And the last author is really the first author. That is… me. Or however it is. What the hell do I mean anyway?

Despite this structural complexity, however, the narrative arc is fairly predictable. In a way, then, The Best Book in the World can be read as one big joke about the insularities and unrealistic dreams of editors and publishers. Such a reading gives this moment of clarity at the book’s fictional Gothenburg Book Fair a subtle double meaning:

Titus looks out across the wonderful mass of adventures and stories down in the hall. He loves what he sees. Fantasies, he thinks, mere fancies and fantasies. Dreams and illusions.

Whose fantasies are these? Does it matter? Stjernström wisely leaves out any depiction of the novel’s public reception, but we know that there’s every chance it will fail in the same way thousands of other such books fail every year. The Best Book in the World is no Borges or Calvino – and that’s the whole point.

When Peter Stjernström got tired of his career in the financial industry a few years ago, the only thing to do was to sit down and start writing. The business suit was changed for more comfortable attire and the computer became his constant companion. His first novel, Enn Mann, was released in 2003. He also works as a copywriter and entrepreneur. He lives in Stockholm.

Rod Bradbury has translated numerous books from the Swedish, including: The Hundred-Year-Old Man Who Climbed out of the Window and Disappeared, The Little Old Lady Who Broke all the Rules and The Vienna Jazz Trio.

Simon Collinson is an editor, bookseller, and ebook producer. He is Geek-in-Residence at Wakefield Press and the online editor at The Lifted Brow. Simon lives in Adelaide, South Australia, where he founded the city’s first Finnegans Wake reading group, and he tweets at @Simon_Collinson