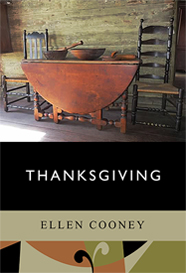 Leave your husband when he hurts you, use ice cold butter in your pie crust, and accept that truth is harder to pluck from history than a feather from a fresh turkey. These are just a few of the lessons learned in Ellen Cooney’s novel, Thanksgiving, a book that follows the women of the Morley family from 1662 right up to the present day.

While covering centuries in a single novel is nothing new, Cooney’s structure feels innovative. The novel is arranged in 21 sections titled by key components of the Thanksgiving meal, a trick that allows quick movement across the decades. These chapters dovetail so smoothly, you almost forget what an ambitious task Cooney has taken on in these 250 pages. Not only is the narrative limited to a single Massachusetts family, it’s also restricted to the Morley family home, which becomes a character itself, one that shifts over the centuries to reflect the wear of time, the changing occupants, and the fashions and finances of the Morley clan. The telling is also limited to the women of the household—young daughters, new wives, respected elders. In Thanksgiving, we have women at many stages of life, and many levels of engagement with this family which, as one character puts it, “has been around a long time.”

What could be a potentially claustrophobic narrative device works in large part due to Cooney’s gifts at getting quickly into the interior lives of her characters. These women are reflective, sometimes brooding, and often forward-thinking. The changing concerns of the American people are never far from the Morley kitchen. As the book progresses, the women are constantly taking note of the ever-changing outside world while attending to demands of their lives and their home. Hester Morley, our 1673 narrator, recalls seeing the “Indian school” set up by missionaries to convert the native population to Christianity: “They looked like people who kept getting shouted at for doing things wrong.” Forty years later, aging Patience, Hester’s mother, reacts to the first news of slavery in the Southern states. “This was a staggering piece of information, landing in their little world like a rock falling out of the sky, to sit ugly and big in the vegetable garden, unmovable.”

This technique manages to make the book feel larger than the Morley home, and Cooney also uses the touchstones of reoccurring items and foods to create a multi-layered, referential quality. In 1941, for example, Mabel, a young mother tasked with preparing the traditional Morley dressing considers how to proceed without a cookbook to guide her:

At least she knows what goes in it besides chestnuts and onions and broth. On the table are parsley, sage, rosemary, and thyme. A loaf of bread is on the counter. It’s nearly as hard as a brick.

Each of these familiar foods invites callbacks to previous chapters, previous versions of this family. The echoes also appear in the actions of these women across time. In 1972, after June, Mabel’s daughter, has left her controlling husband, she reflects that her son “Paul is six. He told everyone his last name is going to be Morley now.” The phrasing mirrors Ruth’s assertion in 1801, after revealing the secret of her husband’s abuse to her family: “I’m taking back my name. My children are going to be Morleys.” Whether they realize it or not, these characters are constantly interacting with, as Eliza puts it in 1726, “those phantom people of the future.”

Despite several of these clever connections across time, Cooney arguably overuses the “confused” elderly character that mixes up her present and her past. Yet these moments can be poignant, as when Eliza notes in 1753 that “she feels a hand of times is grabbing at her, that two arms of time are lifting her, swinging her up, then placing her down somewhere else.” This narrative technique, after several repetitions, begins to present as a kind of visible stitching in the otherwise smooth seams between sections. Regardless, the narrative structure does allow for several nicely done moments of dramatic irony. We alone get to know the untold or forgotten stories of pain and pleasure, and we also get to experience the delight of watching Cooney’s restrained prose subtly shift in style to reflect the changes in American culture and parlance.

The book succeeds at tracking the births, deaths, marriages, and divorces of the Morley family, while letting in light and darkness from the world outside their intimate walls. Tobacco may or may not have been smuggled up from Virginia; gambling debts and college tuition go unpaid; secrets are, literally, burned; wars are fought; Charles Darwin speaks in the nearby town; Prohibition is appealed; family stories morph and change; recipes are created and forgotten, then picked up as if the memory of how to make mince pie is something carried in the blood. Cooney communicates these events to the reader with smooth, even prose, but the sequence of the events is less clear to those living them, as Letty notes in 1876:

Why do people say history has a course, like it’s the water outdoors in the brook? History isn’t water. You can’t make a cup of your hands and gather and hold it. A person can make history but a person cannot make water. Water is either there or it’s not. What course? There isn’t any course! There are only men and women and the things they do, and the things they don’t! And of all those things, done and not-done, when you come right down to it, what have you actually got? You actually only have the things that someone was willing to pass along. And of the things passed along, you have to wonder, how many of them are the truth?

Neither an ode to nor an indictment of the domestic life, the novel encourages us to consider the collective weight of women’s work while also offering a pleasurable, voyeuristic read. To read Thanksgiving is to be given access to a family’s secrets, and permission to question some of our nation’s own darker truths. We not only see generation upon generation of women working hard to raise and feed families, we also see instances of women being hurt by the men they love. But Cooney also depicts loving, intimate relationships between married partners, as well as between parents and children. It seems clear that there is simply no “one way” to be a Morley woman, no matter how many models have come before. Mistakes will be “passed along,” but so will moments of joy, too.

Ellen Cooney is the author of seven previous novels, most recently Lambrusco and A Private Hotel for Gentle Ladies. Her short stories have appeared in The New Yorker and many literary journals, such as Glimmer Train, The Literary Review, and Ontario Review. A Fellow of the National Endowment for the Arts and the Massachusetts Artists Foundation, she has taught creative writing at MIT, Harvard, and Boston College. Her next novel, The Mountaintop School For Dogs And Other Second Chances, will be published in the summer of 2014 by Houghton Mifflin Harcourt.

Caitlin Corrigan earned her MFA from Rutgers – Newark in 2014. Her fiction, essays, and criticism have appeared or are forthcoming in Word Riot, The Review Review, The Nervous Breakdown, Monkeybicycle, NANO Fiction, Waxwing Literary Journal, and the Tin House “Flash Fridays” series. She can be reached at www.caitlincorrigan.com.