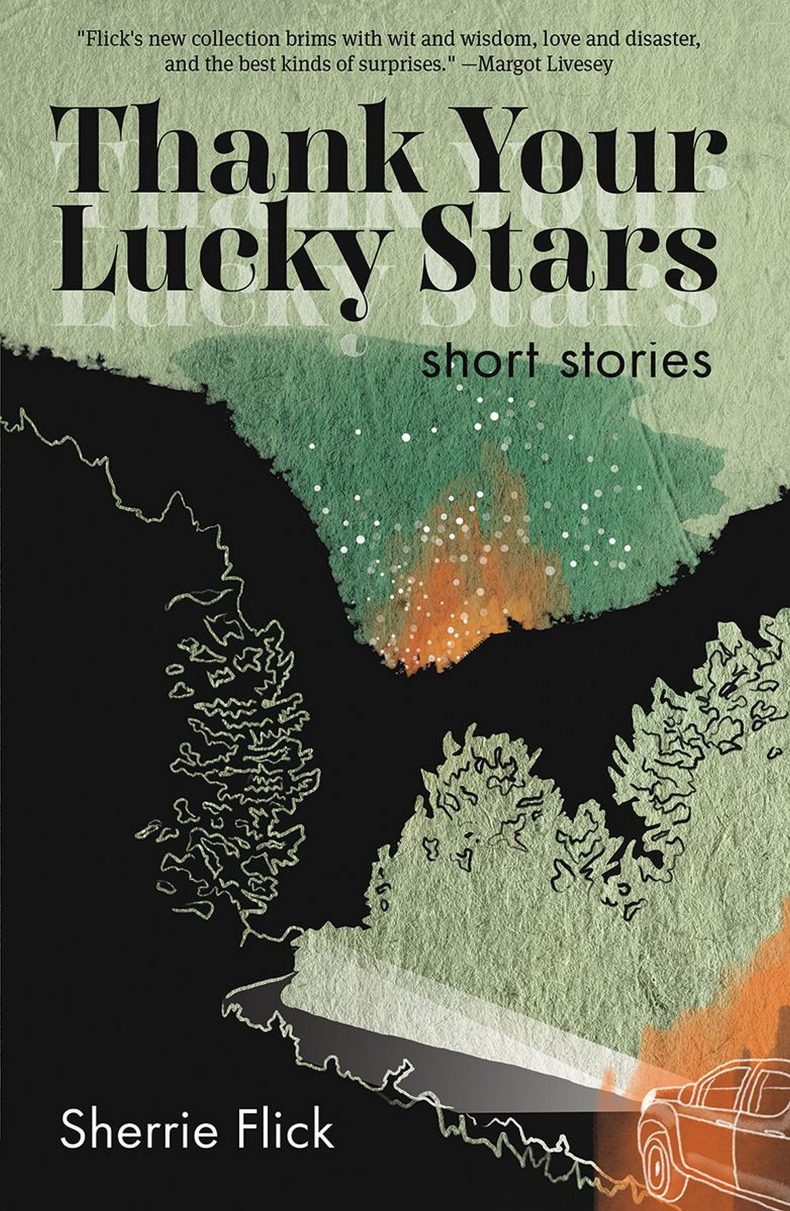 Sherrie Flick’s latest literary offering, Thank Your Lucky Stars, is a collection of fifty short stories with lengths varying from a paragraph of flash fiction to a short story of twenty-one pages. Each is littered with her keen, often touching, observations on relationships and the suburban midwest settings.

There are four sections to the book, which moves from the unsettled characters in the earlier sections to those farther along in their life stories by the fourth section. The stories, while ostensibly unconnected, contain recurring themes and imagery, weaving a welcome familiarity. Animals, plants, food preparation and the pursuit of love, coupled with the search for a feeling of being home are among the themes connecting many of the pieces.

Flick’s writing is fresh and decisive, often lyrical in its descriptions. In “The Bottle”, she describes unhappy wife Francine’s frustration in her domestic setting: when the woman smashes the top off a wine bottle, “it blossomed open with ragged edges… its fractured top like a crown.” One of Flick’s many strengths is her elevation of the object she describes, a quality that is displayed throughout the collection.

The book opens with “How I left Ned,” a short piece describing our narrator’s encounter with a group of fake farmers selling stolen corn, and the life decision she makes seemingly on a whim. Ned does not appear on the page, but is described in such a way that he is familiar to the reader: “I thought about Ned spooning exactly one level teaspoon of nonfat sour cream onto his microwaved baked potato every Wednesday night as a treat.” Poor Ned’s mundane habits serve as reason enough for the narrator to seek a new adventure with the corn thieves. “I left my car right there, engine running. I hopped in, holding on to my bulging bag.” Flick immediately sets the tone for bold, observant writing, and she delivers.

Arguably the most memorable story in the collection, “Dance” details the lives of Viv and Matty, and their fall from grace after a catastrophic accident. Flick’s writing is both poetic and poignant. She describes retired teacher Viv as having “schoolbook knowledge settled inside her like a sand dune. Ideas and concepts flit through her thoughts, shimmer and dull.” Viv drinks whiskey with a mounted deer head called Mr Bojangles on the patio while Matty bakes pastries he sells to neighborhood mothers. In the space of a snapshot of their quiet afternoon, Flick elicits empathy for two characters who are suffering the effects of having lived a fast, reckless lifestyle.

Flick’s flash or sudden fiction has been widely published and the very short pieces within Thank Your Lucky Stars do not disappoint. One such stand out is “Crickets”, a one-paragraph story that packs a powerful punch. “They sing like pleasant car alarms again and again. Again and again. In their little black jumpsuits, they take to the crooked sidewalks in droves, not hesitating to leave the flowers and grasses.” Flick turns the often overlooked into subjects worthy of our attention. Her descriptions engage, and challenge the reader to take notice.

Home is another one paragraph-long piece, in which Flick manages to evoke an elderly couple’s home without ever mentioning the pair. “A pantry. Jars of jams. Beets and tomatoes pulsing An empty clothesline in the backyard.” The sentence length is varied, the language simple. Flick’s details are specific: “A doghouse I don’t go near because of the hornet’s nest,” and yet she conveys such a warm feeling of homeliness that it is universal in its sense of comfort.

“The Last Good Day in the First Garden” is a haunting piece about a character forced to move away from their beloved garden by abusive neighbors. Setting the departure against the life cycle of the corn crop, Flick ends with, “You steal this moment. You take it away.” And that is what her book offers, glimpses and moments in the lives of her characters, written both sparely and with elegance, for her readers to steal and take away.

Thank Your Lucky Stars follows its many characters through life’s trials and missteps and its everyday stages. There is almost a circadian rhythm to the placement of their pieces and the repeat appearances of dogs, crickets, farmland and the sense of home masterfully bring together fifty individual stories.

Jo Varnish lives in Maplewood, New Jersey. Her short stories have been published in several outlets, most recently The Bangalore Review. Currently studying for her MFA, last year Jo was a writer in residence at L’Atelier Writers in Villeferry, France.
Share This