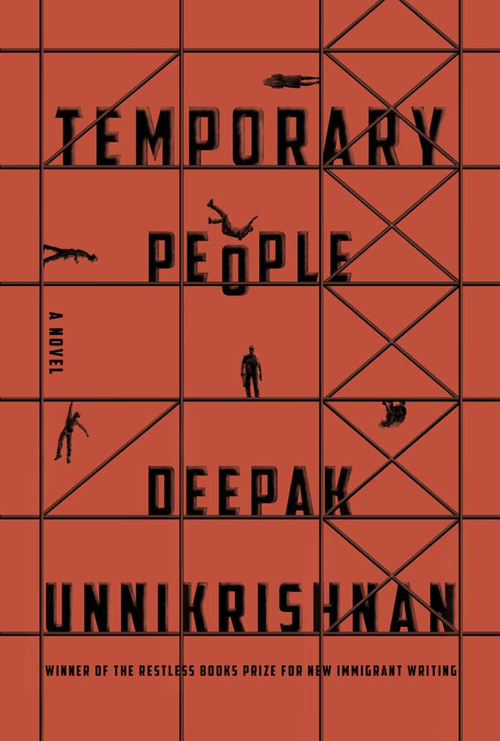 Deepak Unnikrishnan’s novel Temporary People begins with a foreword in which he explains how he moved from the United Arab Emirates to the United States. In that process he apparently became an ‘immigrant of fortune’. The UAE though, is a country where 80% of the population are foreign nationals and have temporary citizenship, to help build the towering buildings we would associate with places like Abu Dhabi. It is a nation, as Unnikrishnan says, ‘built by people who are eventually asked to leave’. These then are the temporary people to which he devotes his novel.

Perhaps because of this temporariness, Unnikrishnan’s book is fragmented and elusive and indeed only temporarily focusing on characters and stories. It has different levels, registers, and voices, and it occupies that sphere we’d probably call somewhere between postmodernity and late capitalism. Contemporaries, guided by publisher marketing, have therefore been cited as George Saunders and Salman Rushdie. There is certainly a Rushdie-esque post-colonial element to the book, but when we talk about these theories in line with fiction, what we see is a writer battling with the barriers of language to render a gateway to a reality the writer is clearly, on a level both artistically and not, alienated from. You’ll see Unnikrishnan use a composition of American English ‘tampered with Malayalam slang’, Indian-Emirati, Arabic and British to establish this gateway.

In this way we’ve talked about post -modernity and late -capitalism, there is something about the text that is imbued with a sense of departedness as much as a temporariness; as Unnikrishnan says, it is based on people who ‘are eventually asked to leave’. The opening ‘chabter’ (author’s spelling) describes a labourer who physically turns into a passport. The scene describes him going through airport customs but the operative idea is of being ‘past’:

…past the guard on night duty, made it on the morning bus to the airport, past the bored ticket agent at Check-In, past Security, past pat down and a rummage through his suitcase, past using the bathroom once, twice, thrice, to pee, to shit, to sit, past Duty Free where he stared at chocolates and booze and magazine and currencies…’

And so the passage continues for the majority of the opening story, being past and gone, before its even registered or given meaning. What pervades though is a sense that this is as much about the US as it is the UAE: the feeling of being eventually asked to leave is not just restricted to the UAE here. ‘Anna’ (nobody appears to have a real name, if such a thing exists) ‘repairs’ people that have fallen working on construction sites:

Imported planners erected tall stringy American-style streetlights. Pay attention and one could hear mercenary architects barking instructions to create the perfect city – Move. This. There. That. They never slept without barking orders into the night, into the wee hours of the morning, never resting. The city was a board game, labor its players, there to make buildings stronger, streets longer, the economy richer. Then to leave. After.’

All that seems apparent is the state of constant movement and flux, part of a great swell of whatever the great force of movement is, whether that be capital, ideology, or something similarly hard to define. Yet, along with the construction in the novel, there is an inevitability of destruction, and you can’t help but feel that we’re as much accustomed to romantic dreams of construction and harmony, as we are a deep-set fear of the carnage that can’t help but be played out in the rapid capitalization of a society. Call it a case of transference, but again, it doesn’t feel like we’re only talking about the UAE here.

The sense of collision is potentially instigated by that amalgamation of language he mentions in his foreword. He notably describes the task as to ‘take the conversation a step further’. Conversation or not, people are often ‘converted’ in his work, from the person who turns into a passport to the one who turns into a suitcase, to the insects that turn into people. This is also perhaps why it doesn’t necessarily feel ‘set’ anywhere. Instead, it feels, like his boiling-pot of language, that the narrative is constantly caught in that moment of conversion. In the sense though that Unnikrishnan describes himself as an immigrant of ‘fortune’, as much as there is abstraction and dehumanisation, there is a sense of ‘value’.

I am a long serving responsible adult; a 20 year veteran in the Ministry’s employment. I check all the right boxes: I think carefully; I am a family man: a wife, two young daughters; I have a job which bores me, but the work, it gets done.

The fact that the section above is one big sentence (or construction) broken up by the halting colons and semi-colons, emphasises how all these identities are forged into one. Unnikrishnan though, in being promoted alongside writers like Saunders, in eschewing the structured prose, is eschewing a reality that he doesn’t appear to think exists, that cannot be rendered in one beautiful sentence, or indeed a novel full of them: what would be the purpose of that? It is instead, the whole, fractured rig, the many parts and things that go into being and that cannot be captured by one identifiable voice making these things whole. And it is brave because it acknowledges that even the writers themselves are temporary, only a partial, fleeting moment of being, with posterity reserved for something beyond their powers. Perhaps until the end we’re all in a state of conversion, of temporariness, living it and being it: that is potentially the true state of our lives.

Deepak Unnikrishnan is a writer from Abu Dhabi and a resident of the States, who has lived in Teaneck, New Jersey, Brooklyn, New York and Chicago, Illinois. He has studied and taught at the Art Institute of Chicago and presently teaches at New York University Abu Dhabi. Temporary People, his first book, was the inaugural winner of the Restless Books Prize for New Immigrant Writing.

Liam Bishop is a writer based in Leeds, UK. You can contact or follow him through @liamhbishop.