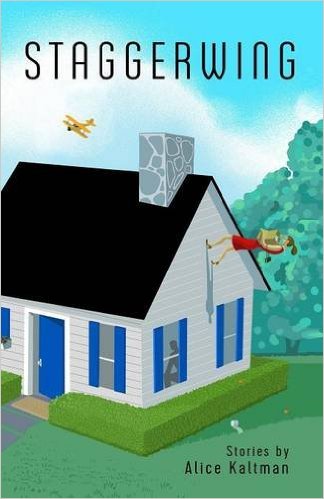 Alice Kaltman’s Staggerwing is best savored with a few bites of dark chocolate with chili pepper. It would complement the tone of the stories—bittersweet with a bit of a sting. A very balanced debut collection of eleven short stories, it’s hard to pick favorites. However, the author does unquestionably excel in first-person narration.

The collection opens with a story written in first person. In “Stay a While,” the writer conjures the voice of an honest, seventy-year-old (house)wife of a retired academic. Mrs. McIntire tells us herself in the opening phrase: “I needed a goddamn purpose.” The reader is pulled right into the story by the authenticity of her voice (she uses words such as “patootey,” “geez Louise,” and “whammy”), and by the vivid, amusing way she describes her world (the wet bar is “a nine-foot long red-leather studded embarrassment.”) She says things like, “Motherhood hadn’t been a sparkly fiesta for me,” and “With another loose wave of his Scotch-holding hand…” The plotting is interesting and original. Mrs. McIntire turns her creepy basement into an apartment she rents out. The things the guests leave behind, like scarves, books, or toothbrushes, soon become her obsession:

I’d test out every lost item. And like a magic spell, each time I’d feel a distinct emotion that was not my own. Far from my own. … Each item was only good for one high. After twenty minutes of feeling someone else’s feeling, my life resumed its blank and boring regularity.

These stolen sensations become her raison d’être and an addiction: “…I couldn’t stop. Couldn’t keep my paws off other people’s personalities.” Soon, finding them doesn’t suffice. When she begins stealing, a debacle is inevitable.

“Boss Man,” the third story of the collection, is also written in the first person. Here, too, the quality of the voice keeps the reader glued. A journalist with a shattered reputation meets her husband’s boss, Chet, “a gazillionaire who never went to college, likes to surround himself with brilliant, young, exploitable employees he treats the way a cat treats a litter box.” and Chet‘s “lady friend,” who proves to be an old acquaintance of the narrator. The language is original, the tone conversational and amusing: “There’s a chance he was handsome once upon a time, with cleft chin and sparkling white teeth, but now he looks like an inflated Disney prince pool float.” The story flows well, intertwining dialogue and backstory.

The story that lends its name to the collection, “Staggerwing,” revolves around the very tall Will Andrews and his interactions with Mariko. The young woman is his driver every day in Tokyo, where he is supervising the installation of a Staggerwing airplane. What seems to be a Jane Eyre-esque story, told from Mr. Rochester’s point of view (Will also happens to have a mentally ill wife), “Staggerwing” is actually a story about cultural differences and misunderstandings. Will’s guide to Mariko’s gestures is The Essential Guide to Customs and Culture. His interpretations are often erroneous. In spite of Will’s efforts to grasp Mariko’s feelings and intentions, they remain a mystery to him (and the reader) to the very end. The story has the same slightly humorous, ironic style that seems to be the author’s trademark. It is peppered with unconventional similes. Here, Will explains to Mariko what a comma is:

He raised his hand and air wrote, “Mariko is a very good driver comma, one who pays close attention to traffic comma, pedestrians comma, and keeps her eyes on the road period.” Commas were indicated with quick downward flicks of the wrist and the period with a dramatic frontward pop of pinched thumb and forefinger. Mariko tittered at his gestures, like a tiny woodland creature gleeful at finding a stash of unsullied nuts.

The ending, in its bitterness and the way it reinforces the theme of misunderstandings, is memorable. Elsewhere in the collection, some of the story resolutions feel weaker, especially in the case of stories with great dramatic tension, for example “Snow Day” or “Stay a While,” which end on a too-quiet note.

There is no narrative thread uniting the stories. They are linked by the author’s unmistakable voice and the recurrence of several themes. For instance, the playground politics concerning fresh moms in “Bigfoot” and pubescents in “Blossoms,” best illustrated in the latter, a coming-of-age story: “The Tulips were thrilled. The Daisies not so. The Roses wanted to impress the Tulips, so they pretended to be cool with it.”

Another recurring theme is learning to move forward. The narrator in “Boss Man” begins to recover after a resounding failure as a journalist. Following an encounter with her mentor, the artist in “Tossed” changes her priorities. Helen in “Stranger in Paradise” overcomes the death of her partner.

Two of the stories are told from multiple points of view. In “Honeymoon Suite,” the only connection between the characters is the named suite. Consisting of four sections, the two written in the first person are utterly piercing. The mother of the bride in “Jitters” says with a brutal honesty: “The red lipstick gives her a demented kewpie doll look. I’m not sure what mistake she’s referring to, the veil, the dress, or the whole wedding. I keep quiet.“

In “Snow Day,” the points of view converge and the three characters, whose backgrounds, interests, and aspirations could not be more different, meet at the end. Kaltman swaps between points of view but avoids disorienting the reader by announcing the POV character at the beginning of each section. In the space given to each character’s actions, context, surroundings and how they are seen through the eyes of the others, these well-rounded, complex personalities have room to unfold.

On the whole, Staggerwing is an immersing read on account of Kaltman’s sizzling prose and sparkling humor. She creates a gallery of characters readers may loathe or adore, cheer on or disapprove of, but whom they will certainly remember.

Alice Kaltman is a writer and a surfer who splits her time between Brooklyn and Montauk, New York. Her short fiction appears in Joyland, Whiskey Paper, Storychord, The Stockholm Review, Atticus Review and Chicago Literati and in print anthologies. She has also written two novels, Saving Grace and Wavehouse. Her website is www.alicekaltman.com.

Sophie van Llewyn lives in Germany. She is an Assistant Editor with Bartleby Snopes. Her writing has been published by or is forthcoming in Hermeneutic Chaos Journal, Halo, Flash Frontier and Unbroken Journal, among others. You can find her on Twitter @Sophie_van_L.