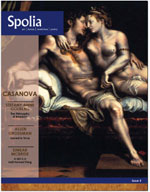 NB – Full disclosure: I have a short piece in “The Wife” issue of Spolia that was published last week. However, that piece was commissioned and published after I read these first two issues and after this review was written.

This past spring Bookslut launched its sister publication, Spolia, a literary journal publishing monthly themed issues. The word spolia comes from the Latin (spolium) for spoils, and its literal meaning has to do with the hide removed from a dead animal. In a military context this word meant booty or plunder, indicating the wealth and riches taken by the Roman military commander during a conquest. Most importantly, this meant the weapons and armor seized from a vanquished king. But spolia has an architectural meaning as well, referring to the still workable/functioning/aesthetically relevant parts of a destroyed building that are then used to create a newer structure.

There are plenty of metaphorical implications of this word spolia in its application to the world of letters—the most interesting is perhaps this notion of resurrection. Objects excavated and removed from a demolition used then in a rebuilding project. Spolia’s darkly comic yet undeniably serious Manifesto lists certain contemporary literary trends worth demolishing, including:

“Write what you know,” i.e. repeat the same set of assumptions and formulas to yourself and your friends forever, so that the mind and the language have nowhere to go.

The curious tribal belief that—despite the fact that we live in an age where translations are plentiful and access to foreign literatures is easier than it’s ever been—certain neighborhoods in New York City = the world.

Taken this way, the concept behind Spolia is as much a cry to arms as it is a form of mining, of sifting through rubble, of hunting for gold. Where are the buried “pieces” from our vast literary universe that could stand some brushing off and new display? Spolia is looking everywhere—in places both familiar and unexpected. And this isn’t just a geographical and temporal landscape, but a thematic one as well.

Issue One, “Ballet Russes,” which became available in April, is dedicated to writing that explores the life (and related lives) of Sergei Diaghilev and his Paris-based Ballet Russes, commonly considered the most influential ballet company of the 20th century. The issue includes Jessa Crispin’s interview with Jane Pritchard (who curated London’s Victoria & Albert Museum exhibition of the Ballets Russes), an essay on Natalia Goncharova and her artistic contributions to Diaghilev’s “era,” as well as a hefty selection of reproductions of Goncharova’s works. These pieces combined create a detailed and engaging portrait of a man who led an artistic and cultural revolution, as well as the worlds he inhabited and touched.

The issue also includes several unrelated pieces, both fiction and poetry. And while these other pieces do not necessarily touch the Ballet Russes directly, they do further this notion that literature and discussions of literature do not need to be centered in familiar spaces. In its first offering, Spolia sets about proving that off-centering our literary world can only enrich us. Daphne Gottlieb’s “Bess,”—a harrowing but human-oriented look at drugs and medical emergencies; Phil Sorensen’s re-castings (translations really) of Alfred de Musset’s poetry; Hoa Nyugen’s fragmented and unsettling poems; Peter Vermeech’s “Gone” which takes us to post-war Kosovo with a unique and touching perspective.

It is hard to pick a favorite from among these, although Mikhail Shiskin’s essay, “Of Saucepans and Star-Showers,” is about as perfect as a personal essay can get. It is several portraits rolled into one—of family, of fathers, of sons, of a nation, of a new expat home—and is filled with admiration and wonder for the strange world of the 20th and 21st century we live in. Where one man can be born “a slave” and his son have the world at his feet.

For their second issue, “Black Magic,” Spolia explores this notion of the witch. From Megan Abbot’s superb essay on the role of the female body in discussions and representations of witchcraft to “The Mermaid,” an excerpt from a novel-in-progress by Mia Gallagher that deals with a child’s very real attraction and fear of fantasy, to several representations of the eerie and geometric paintings of Hilma af Klimt, a Swedish painter who was heavily influenced by mysticism and eventually only painted “under the influence of spirits.”

The non-magic pieces include Daphne Gottlieb, “Kind of Blue,” which manages to ask the question, “How do you fix a broken heart” without once become saccharine or trite. This is a short piece about aging and memory, about the curious connection between people that can suddenly, unexpectedly, conjure up a universal truth.

This second issue also includes an excerpt from one of the several yet-to-be-translated travel journals written by Swiss adventurer and explorer Ella Maillart. The piece featured here is from her “Parmi la jeunnesse Russe” and tells of Maillart’s time in Moscow when she was 27 years old. Translator Daniel Schvartsman tells us in his short introduction:

Armed with a Russian dictionary, a visa, $50 from Charmian London, (American writer and wife of Jack London) and her knack for creating good situations, Maillart takes the Berlin-Moscow direct train and stays for a while. (Her knack serves her well immediately – she ends up boarding with Tolstoy’s daughter-in-law).

Finally, the poetry pieces in “Black Magic” are exceptional—Emily Brontë’s “A Daydream,” in which her narrator lies unmoving beneath the dazzling sunshine of a summer’s day and experiences an ecstatic and morbid communion with “the spirits”; or Lu Xun’s dreamstate transformation in “Dead Fire,” translated by Matthew Turner:

This was dead fire. It had burning shape, but had no swagger; total icy rest,

out of its core, so charred. Like that casting itself on all the icy ornaments, so

reflecting back on itself, changing into innumerable shadows, becoming this

valley of ice, turning it the red coral color.

This short issue also includes Jeannine Hall Gailey’s stunning “Robot Scientist” poems and the introspective and fanciful “Macumba-Word” by that most famous of Martinique’s poets and politicians Aimé Césaire. A poem that is truly an homage to the power of language.

These first two issues of Spolia establish that it is an extremely exciting new literary journal. Its dual engagement with the past and the present, its emphasis on translation, its unpretentious intellectual nature and its obvious but unstated conviction that women’s writing (as contributor or subject) is to be taken as seriously as men’s, and its sly embrace of often marginalized topics all mean that Spolia promises to become a worthy and worthwhile contributor to our 21st century literary discussions.