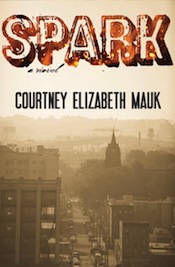 For some readers (and I am one of them), one of the best reading experiences is one that involves a certain level of surprise—not necessarily plot-related, although depending on how it is done, that can work as well. I’m talking more about surprise in the sense that something about the book subverts some of the very expectations it constructs in its early pages.

The opening chapters of Courtney Elizabeth Mauk’s Spark present a family history and dynamic that is immediately engaging: Andrea’s brother Delphie is about to get out of prison and come to live with her and her live-in boyfriend Jack. Delphie has a troubled past that involves juvenile detention, pyromania and the accidental death of a family of four. Andrea, our first-person narrator, hasn’t seen her brother for many years and has built up an image of him based on her childhood memories and her understanding of his crimes and compulsions. Jack, for his part, is an artist, and the immediate tension between Andrea, her brother and himself, as well as what Jack understands of the origins of that tension (Delphie’s crimes and Andrea’s assumptions about what initiated them), become a form of artistic inspiration. The result is quite disastrous and the connections between these three people begin to fray and wear out.

Within the story of this three-person relationship, Mauk introduces a neat parallel between the ideas of compulsion and its softer, more attractive manifestation, desire. Andrea is a self-aware and thoughtful narrator, and she gives us real access into how she has struggled with this very question:

Desire and impulse, two words, inseparable. I have mulled over both. I have thought about Delphie on that shadowed slab of sidewalk, watching the Greenes’ house ablaze, his face turned up to receive the heat, the golden caress. Did his pulse quicken? Did his body shake? Was what he felt the same yearning, the same heightening momentum of Jack’s body entering mine? Was what he felt better, greater, a divinity beyond anything I’ve ever known?

Lying awake at night, listening to Jack breathing beside me, I have clenched my hand in the sheets. I have tightened my body, squeezed shut my eyes, strained every muscle for an answer to my questions, a point of understanding. And I have found nothing. My reactions are lacking, my wants incomplete, my soul inadequate. In those moments, I have hated my weakness. To know such pleasure that you would do anything, even kill, for its achievement—that must be a drive like nothing else.

Essentially, this question of desire is where the entire novel will hinge. And as Mauk leads the reader through Andrea’s exploration, she also begins to embed what has been a conventional narrative with a series of unusual scenes. As Andrea’s situation becomes more difficult (conflict with her brother, with Jack, with a looming threat of Delphie committing another crime or falling ill), she spends increasing amounts of time on her own. And she meets an intriguing young woman named Sally in a music store one evening, late at night:

She looks up at me and smiles.

Skeletal and beautiful, she wears a black, beaded flapper dress, the skirt ragged and torn at the hem. A large gold cross hangs from her neck, and she pulls on the chain as she flips through her CDs, her nails clattering against the cases. Her skin is pale, almost translucent, contrasting with her long black hair, her dark red lips, her dark eyes outlined even darker.

Despite the NYC setting and Andrea’s savvy as a city-dweller, Sally is given to the reader (and to Andrea) as foreign and exotic, a person well outside Andrea’s current life and difficult situation. Sally leads her to a deserted bar, and eventually, on another evening, to an unusual and private cabaret. From the beginning, Andrea’s relationship with Sally marks a change in behavior—risk-taking, experiencing and observing the world that lies beyond her comfort zone. Andrea is stepping outside of herself.

While remaining firmly realistic, these scenes with Sally veer somewhat toward the fantastic, or at least the imaginary. Sally is a creature of the night—she wears costumes, she drinks vodka, she smokes cigars, she unveils a scarred body to the delight and shock of a drugged public. In Andrea’s quest to consider such questions as desire and impulse, Sally presents an extreme. She is both a physical and ideological manifestation of an “object of desire,” and she is also mysterious, compelling, and unknowable. Suddenly, Andrea is walking that line between desire and compulsion herself.

Where Spark becomes gently provocative is that it sets itself up inside a framework of easily understandable psychology—the institutionalized language of “impulse-control disorder,” the built-in guilt of a sister for her wayward brother, the lingering effects of a damaged childhood—but as the story progresses, and as Andrea allows herself to experience and explore this notion of desire, Mauk reminds the reader that desire is as much about satisfaction as it is about control, and that there is nothing so false as the notion of easy psychology. People are messy, humans will do the unexpected. At this point, the narrative itself begins to blur around the edges. Scenes become a little more impressionistic. Andrea’s self-awareness (and therefore her clarity as our narrator) begins to softly break down. It is a wonderful narrative transformation, both surprising and extremely compelling, and it makes the book much more complicated than it first appears to be.

There is a line from near the end of the novel, when Andrea is allowing herself to imagine the first moments of her brother’s gravest crime. She tells us:

This line speaks well to what I took to be the point of Spark. This is a book as much about its central fictional story as it is about how people create their stories, how they must invent an understanding of other people’s actions and where everyone’s lives affect one another and fit together. This is a novel about our longing to know another human being completely and to know ourselves, and how we make that attempt, creatively and emotionally, and where it leads us… for better or worse.

Courtney Elizabeth Mauk received an MFA in Fiction from Columbia University and has published in The Literary Review, PANK, Wigleaf, and Superstition Review, among others. She is an assistant editor at Barrelhouse Magazine and teaches at The Sackett Street Writers’ Workshop. She lives in Manhattan with her husband.

Michelle Bailat-Jones is a writer and translator living in Switzerland. Her fiction, translations and reviews have appeared in various journals, including The Kenyon Review, PANK, Hayden’s Ferry Review, The Quarterly Conversation, Two Serious Ladies, Cerise Press and Fogged Clarity. She is the Reviews Editor here at Necessary Fiction.