So You Know It's Me by Brian Oliu 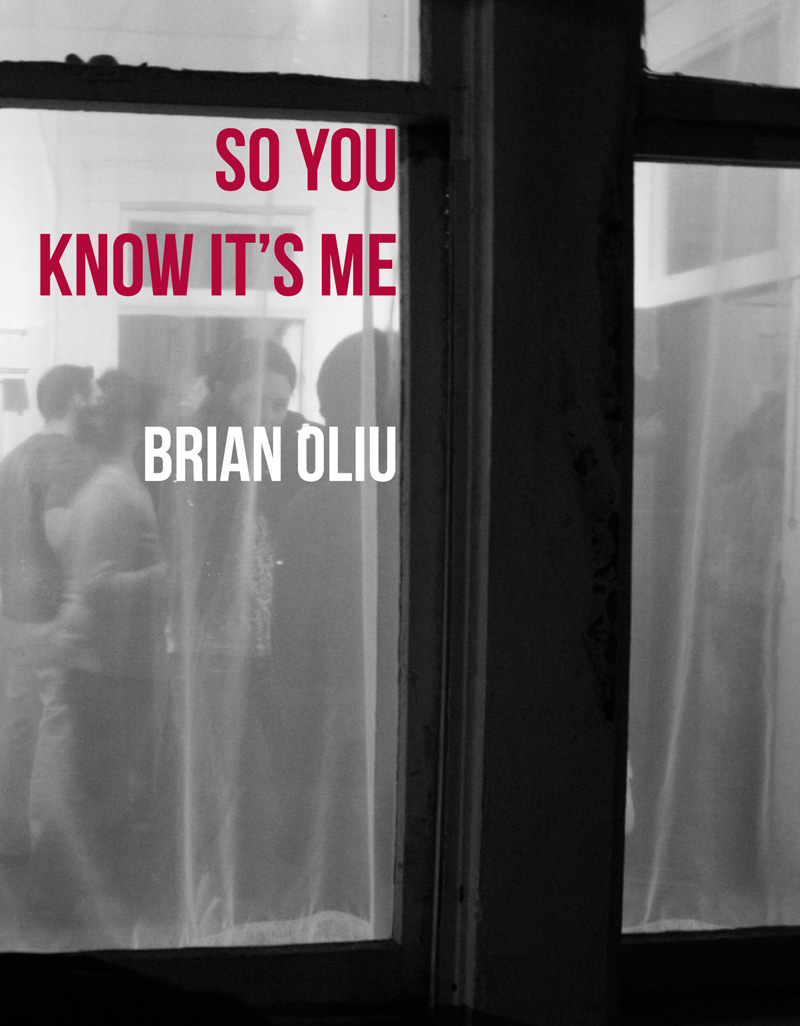 Last week I attended the annual Revere Beach Sand Sculpting Festival, where masterpieces of sand and glue towered above spectators, rivaling the beauty and intricacies of a more permanent medium like stone. As I stood there admiring art whose destruction predates creation, I came to the slow realization that I was looking at a visual metaphor for Brian Oliu’s collection of lyric essays So You Know It’s Me. Originally posted on the Tuscaloosa Craigslist Missed Connections board, each essay lived a mere 45 days before disappearing into internet ether, like a sand castle reclaimed by bulldozers. Or the sea.

Pushing the sand castle metaphor even further, I started wondering what form Oliu’s book would take. Oliu proposes his own conflicting shapes, suggesting “this has to do with the looping of things, the creation of a circle where there once was a line” (43) before advocating for flatness, “this is not about spiraling—this is all coming out flat, wobbled” (48). Personally, I would vote for an MC Escher staircase (either “Relativity” or “Ascending and Descending”) to satisfy both Oliu’s looping flatness and the disorientation the reader experiences, confronted with contradictory expectations when all the essays are read together. Like Escher’s staircase, the essays become missed connections themselves, tempting the reader to create logic and linearity out of “circles within circles,” (13) which invite solving but inevitably defy solution.

For the book is full of contradiction. Going up a staircase when you thought you were going down. Believing it was about you “Make no mistake, this is about you,” (25) only to discover “this has nothing to do with you,” (38). Throughout the book, Oliu plays with the reader, establishing the rules of his world only to break them. What starts as a relatively straightforward, albeit slightly creepy missed connection in a stadium or a frozen yogurt shop quickly (d)evolves into a broken narrative that conflates one girl with many, or vice versa. Does the girl who wore a hound’s-tooth skirt in a sea of crimson (the genuine kind, not the Walmart kind) also frequent the gym and forget tonic for the party she never attended? Or is she a mourned ex-girlfriend who imprints her face on “all of these girls I’ve been missing when all I’ve been missing is you,” (51). Or perhaps these pieces are simply fabrications peopled with virtual phantoms condemned to a craigslistian existence of six weeks. We can’t be sure.

Taking advantage of the ambiguity of English grammar, Oliu confuses nostalgia with possibility, further fusing imagination and reality. “I would talk about a world where I drove you home after you had too little water in too long of a time. About a world where you knew my name,” (30). Without any grounding in linguistic certainty—did this really happen or not—the reader begins to question the nature of the missed connections themselves, asking who or what is missed? Or missing? And yet, the book is not completely ungrounded. The setting of each piece anchors the reader in a tangible location—“the stadium where I saw you, the frozen yogurt shop where I saw you, the gym where I saw you, the bookstore where I saw you”—that establishes the where of the event if not the who, when, or why, and reads almost like an ode to Tuscaloosa, a city that acquires even more significance in the wake of the tornado’s destruction. (The irony that a piece of Internet writing with a 45-day lifespan has outlived structures of concrete and brick and wood is not lost on me).

But in a book full of metaphors, perhaps my attempts at metaphorical explanation are superfluous. Why not employ one of Oliu’s own: the elliptical machine, the video game, or the thrift store, where “all things will expire—one every two days—all things will be missed and missed again” (44). The incongruities found in Oliu’s essays are rendered unimportant because Oliu gives us familiar objects to latch onto, reminding us that we too have been here. In the end, it doesn’t matter if there was one girl or twenty, because we’ve felt the same desperate longing that underscores each missed connection, changing sometimes shape, but never meaning. And we sense its truth because we too have plucked daisy petals and shaken magic 8 balls and played delusional mind games—“the fact that you cannot remember anything proves that I am the 100% perfect boy for you” (28)—to justify unwarranted obsession. What seems confusing or even obsessive becomes recognizable when we forget about what we don’t know and will never know and instead focus on the given.

Which brings me to Oliu’s last and best metaphor: a pendulum that swings back and forth between extremes (this is about you, this isn’t about you) and counts down the hours, minutes, seconds until destruction. Because this is a book about death. About wanting to be missed instead of missing. About how we eulogize friends of friends on Facebook, so that “when I die, you will say the same things” (34). But it is also a book about faith in the face of death, a “belief in something without proof, without anything to hold” (35) and the hope that we’ve meant something to someone, somewhere. A missed connection is still a connection. Proof that we’ve lived and loved even if we’ve never been loved, which explains why the answer to Oliu’s marriage proposal doesn’t matter. Because the proposal itself validates his existence. It is the act of writing, of creation that matters most; the reading is inconsequential.

Brian Oliu is a nonfiction writer from New Jersey. He lives in Tuscaloosa and teaches at the University of Alabama. He can be found online at www.brianoliu.com.