Shape of the Sky by Shelagh Connor Shapiro 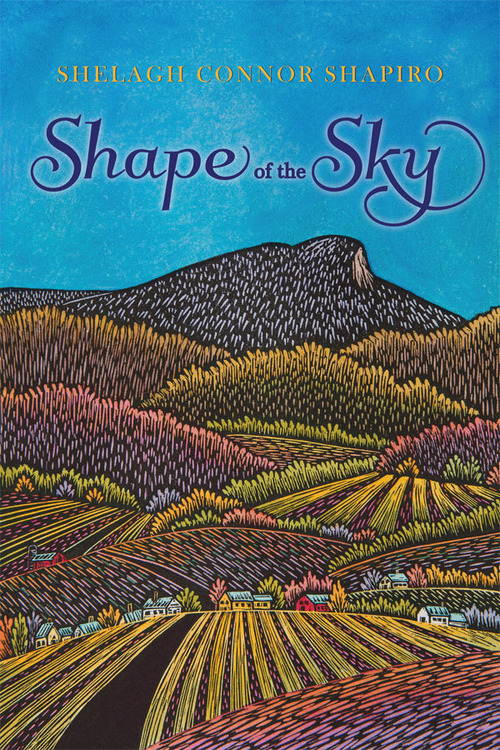 In his films, the late director Robert Altman urged his actors to talk over each other. He wasn’t concerned with the audience absorbing every uttered syllable. Instead, he wanted to craft a wall of sound, wiring everyone with individual microphones. The scenarios felt genuine and claustrophobic. In these moments, Altman captured the way we speak in crowds: at once, when inspiration strikes, without regard for others.

Shape of the Sky, the ambitious debut novel from Shelagh Connor Shapiro, includes an early chapter reminiscent of Altman’s audio density, one that immerses the reader in dialogue and action as a way of outlining the rather large cast of characters. Shapiro sets her narrative in the small community of Resolute, Vermont, and in the opening pages, the town residents have gathered to vote on a proposal allowing a famous jam band, Perilous Between (think Grateful Dead by way of Phish), to hold a two-day concert within town limits. Standing up front is hopeful school music teacher, Guy Masters, and as comments fire from the audience, Shapiro fashions distinct personalities for each voice, whether the speaker is curmudgeon Rita Frederick or young guitar slinger Carter Akyn. This “fly on the wall” nature of the meeting jump-starts the plot while familiarizing the reader with the author’s sizable ensemble.

This familiarity comes in handy immediately, as the novel then adopts a nonlinear timeline, bouncing from March—the Town Meeting—to August—the concert. This shuttling permits the author to manipulate character trajectory at her leisure. For example, just days prior to Perilous Between’s performance, Resolute’s new constable, Chris Kozlowski, is called to the scene of a murder, yet the murder itself doesn’t occur on paper until two chapters later, when it is seen by a party goer, and the events leading up to the murder aren’t revealed until roughly one hundred pages after that, when Shapiro rewinds to spend time with the victim. In addition, every chapter focuses on a single character, creating frequent moments of event overlap, such as when Carter visits a hardware store, looking for a job, and notices “two girls, maybe twenty years old” who ask to have a set of keys cut. A footnote at best within this segment, this episode reappears in a chapter focusing on Jeannie, a Perilous Between groupie, who rents a room in Resolute and is told by her landlady that she must make her own set of keys. While Shapiro wisely carves clear paths for her protagonists, with specific conflicts ranging from detective work to finding a long lost sibling, small winks like these prevent any chapter from wandering too far from the impending concert at the novel’s core and reinforce the “small town” feel of rural Vermont.

Also reinforcing this “small town” feel is Shapiro’s fantastic use of language. She paints each page with turns of phrase that sparkle: the running water of a stream sounds like “nature’s bells”; a band’s music is considered “dark and kind of swampy”; a man hanging from a noose resembles “a bag of sand, an old metal bucket lowered down a well”. Shapiro also utilizes the occasional word repetition to emphasize a visual, like in the following:

Here, the mounds of material in the first half of the sentence translate in a visceral sense, as does the plight faced by Rita. Similarly, the second half, with its multiple use of “she,” raises the anxiety level of Rita’s person.

Still, while so much of the story succeeds, as with most novels employing a generous group of players, Shape of the Sky occasionally falters, letting certain characters drift off without a satisfactory narrative conclusion. Jeannie, as well as her roommate, Zibet, disappears shortly after she helps position the plot and interacts with the members of Perilous Between. Likewise, Zedekiah, a former member of a religious commune now living in the wilderness of Resolute, seemingly exists solely to complete a single narrative task, popping up for a brief conversation after his spell in the spotlight. Yet while these vanishings do somewhat distract, they rarely interfere with the general enjoyment of Shapiro’s story. Shape of the Sky is a novel that strives to be more than a simple tale of a small town’s culture shock. It wants to spin a web of emotional and spiritual awakenings that tie to a single event, and amid its zigzag structure and other narrative tricks, it hits the mark. The novel’s title is a phrase conjured by Kennedy Jackson, Perilous Between’s singer, to describe how different the sky looks and bends over Vermont. This prism of personality and wonder is on display throughout Shapiro’s writing.

Shelagh Connor Shapiro’s stories have appeared in North Dakota Quarterly, The Baltimore Review, Short Story, Gulf Stream, and others. Her story “somewhere never gladly” was included in Please Do Not Remove, a collection of literary work inspired by Vermont library cards. She has an MFA in Writing from the Vermont College of Fine Arts and is a contributing editor for the Vermont journal Hunger Mountain. Her radio show, Write The Book, which features interviews with authors, poets, agents, and editors, is heard weekly on 105.9 FM “The Radiator”; archived podcasts can be found on iTunes. Shelagh lives in South Burlington, Vermont, with her husband, Jerry.

Benjamin Woodard is a Senior Editor at Numéro Cinq Magazine and is Editor-in-chief at Atlas and Alice Literary Magazine. His fiction has recently appeared in Spartan, Cheap Pop, and others.