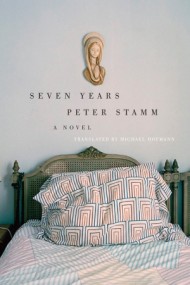 In disarmingly straightforward prose, translated from the German by Michael Hofman, Peter Stamm’s Seven Years is an unpretentious meditation on the subtle tenacity of unhappiness. Stamm isn’t interested in catastrophic events, but rather, the little hurts and betrayals, inescapable weaknesses and patchy mendings. He presents this collection of minor failures through a story of the love and marriage of an architect living in Munich with his wife and child.

Our architect is called Alex and his story, told in a series of confessional flashbacks, begins just before he graduates with his degree in architecture, when he meets a poor, uneducated Polish woman named Ivona and, despite her homeliness, dull personality and devout Catholicism, falls into an unexpected and passionate affair with her. At the same time another woman, Sonia, who will become his wife, is hovering around the periphery of Alex’s student life. Sonia is a dynamic beauty from an upper-class family whose intelligence equals or outstrips his own and whose professional motivation far surpasses his.

This love triangle is the novel’s seed—a tightly contained universe of inexplicable desire and the importance of social expectations. After a few months, Alex leaves Ivona for Sonia and begins his “adult” life. Seven years later, however, he takes up with her again when she, out of nowhere, approaches him for money. This time the affair is more serious in that it becomes a fixed element of his schedule, but his complicated feelings toward Ivona and Sonia remain the same as they were in the beginning. What’s more, this relapse will fundamentally change his life when Ivona becomes pregnant.

Alex’s narrative is, in essence, a comparison of the two women. Ivona, a simple individual whose devotion to Alex borders on mental illness, and Sonia, a kind but distant partner whose passion for her work outstrips her passion for anyone and anything else. Where Ivona is self-less, Sonia is self-full. That essential difference informs Alex’s connection to each woman:

The thing that kept me fascinated with her was her utter devotion. Her unconditional love for me, however purely random, drew me irresistibly to her and, by the same token, repulsed me the instant I was satisfied. Then I would feel the need to hurt her, as though that was my only way of breaking free.

Sonia, on the other hand, is quite different:

I couldn’t picture her as my girlfriend, not in bed, not even naked. She was certainly very beautiful, but there was something unapproachable about her. She was like one of those dolls whose clothes are sewn on to their bodies.

Later, he allows himself a direct comparison:

Sonia was the absolute opposite of Ivona. She was lovely and smart and talkative and charming and sure of herself. I always found her presence somewhat intimidating, and I had the feeling of having to try to be better than I actually was. With Ivona, the time went by incredibly slowly, full of painful silences. She gave monosyllabic replies to my questions, and it was a constant struggle to prolong the conversation. Sonia on the other hand was the perfect socialite. […] But Sonia would never say to a man that she loved him, the way that Ivona had said it to me, as if there was no other possibility. Ivona’s declaration had been embarrassing, just like the idea of being seen in public with her, but even so the thought of her love had something ennobling about it.

These initial comparisons become more pointed as the story deepens. And Stamm repeatedly evaluates his relationship with each woman using a vocabulary of possession. Alex cannot fully possess Sonia, while Ivona gives herself wholly and freely, even when he treats her badly. Yet time and time again, Alex chooses Sonia over Ivona, at least publicly, each time convincing himself that he is wrong to want Ivona and that being with Sonia is proper and correct. He cowers, undecided, in the gap between what he secretly wants and who he thinks he should be. Stamm’s examination of Alex’s unhappiness comes from this disconnect.

Now, the risk Stamm takes by setting most of his discussion in these comparative terms and especially by returning often to this idea of possession, is that there is ample room for an argument about Alex and repressed sexism, or worse, that he’s purely morally bankrupt. Perhaps the root of his unhappiness lies in the fact that he is intimidated by Sonia and not by Ivona, a woman he can dominate physically, sexually, emotionally and intellectually. This begs the question as to whether Seven Years could be read as a lament about the emasculation of the modern man.

Stamm appears to be going further than that, thankfully, and ultimately his discussion shifts from the women’s differences and moves toward questions of self-knowing. For most of the book, the essence of Alex remains enigmatic. He is our first-person narrator, “creating” the story out of his thoughts and memories and feelings, but as his confessions move the reader toward the present time section of the novel, it becomes slowly clear that Alex is separated from himself.

In one of the few lyrical passages of the entire book, Alex gets closer to admitting what he is really struggling with:

I hadn’t picked up a novel in years, but I still remember the feeling of finishing a story when I was a child, late at night or on some rainy afternoon. That alertness, that sense of perceiving everything much more clearly, even the passage of time, which was so much slower than in books. I held my breath and listened, even though I knew there was nothing to hear, and that nothing had happened or would happen. I was safe in bed and in my thoughts returned to the story that now belonged to me, that would never end, that would grow and turn into a world of its own. It was one of many worlds that I inhabited those days, before I started building my own and losing all the others.

Again, that notion of belonging is key. Alex wants the neatness of a closed narrative, something he can wholly possess, not the endless choices he must negotiate and their myriad possible endings. Essentially, he is stuck as the author of an unwritten story; this truth proves debilitating. It is hard to approve of Alex, even to like him, and yet his earnestness and the honesty of his confessions make him recognizably human; this is enough to strike a chord with even the toughest of readers.

Peter Stamm is a Swiss writer with an extensive collection of novels, short stories, plays and other works to his credit. To date, five of his novels have been translated into English (all by Michael Hofman) as well as a collection of short stories.

Michael Hofman is a poet and translator. He has translated over sixty books from German, including work by Bertolt Brecht, Joseph Roth, Patrick Süskind, Herta Mueller and Franz Kafka. He is a Professor at the University of Florida.

Michelle Bailat-Jones is the Reviews Editor here at Necessary Fiction.