Self-Portrait in Green by Marie NDiaye 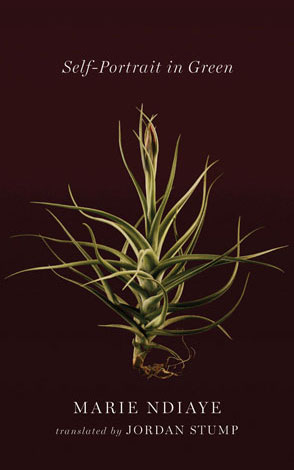 Marie NDiaye’s Self-Portrait in Green (translated from the French by Jordan Stump) provokes many questions, not least of which is the question the reader must answer: who are the “women in green” who populate the book? They are mysterious figures, unreliable, cold, threatening, and fascinating. At different points, the woman in green – always in green clothing, sometimes with green eyes as well – is an acquaintance, a teacher, a neighbor, a mother. It is not always clear whether the women in green really exist; one of them appears to have returned from the dead. Another one might be the narrator’s friend, Cristina, but then someone else entirely appears claiming to be Cristina. Perhaps it is best, as the book’s title indicates, to read these women in green as aspects of the narrator’s psyche. The narrator (who may or may not be NDiaye herself) gives us a glimpse of her preoccupations and anxieties about identity by projecting them onto these mysterious shape-shifting women.

They seem, in particular, to be a way of working through anxieties about family. Early in the book the narrator drives her children to school and sees a woman in green almost hidden by a banana tree. The woman provokes a deep unease in the narrator, but the children do not see her at all. They seem to be too innocent, too fresh, to register the eerie, ominous woman. This state of innocence is precarious. Speaking of the ability to see the woman, the narrator says, “I realize that my children are still in the first stage of this phenomenon, where I myself was stuck until that radiant spring morning when I first found myself seeing a woman in green…” Seeing a woman in green means seeing into the darker side of human existence, into a world of desire, disappointment, jealousy, and uncertainty. The narrator celebrates her children’s innocence, but it’s an innocence she did not share as a child, as she remembers a teacher who was a woman in green: “Tall, brutal, and heavyset, she promises us all a trip to prison if we eat too slowly, if we dirty our clothes, if we don’t raise our eyes to meet hers.” This anxiety about children and childhood appears in Cristina’s story as well. The green woman who may or not may not be Cristina tells the narrator a troubling story about leaving her children with her parents and unexpectedly witnessing her father crying miserably and saying that he can’t bear to take care of his grandchildren anymore. But then Cristina enters the house and the entire family seems to be in harmony. She is now uncertain what to believe.

This is the situation regularly in Self-Portrait in Green. The narrator moves through a number of scenes that don’t add up to a plot with a traditional story arc, but instead, follow the narrator’s psychological states, moving from anxieties about her children, to anxieties about friends, siblings, and parents. In each scene, there is a woman in green, although as the book goes on, the actual existence of green clothing becomes less and less important and the narrator’s ability to recognize the green woman as a type becomes stronger. To say that the green women represent the narrator’s anxieties is to slightly misrepresent the figure’s meaning, though, as the narrator feels drawn toward these women as much as she is perplexed and worried by them. They seem to symbolize the complexities of adulthood, the way that great losses can also bring great gains. When her friend Jenny, who has grappled with a woman in green, bemoans their loss of youth, the narrator thinks about everything Jenny is mourning: “the belief in the infinity of possibilities, the illusion that you can forever start over again, that every mark made on you lasts a little while then ends up disappearing.” Her response, however, is to celebrate these losses: “We no longer have that, but isn’t it better this way? Isn’t it a thing to be grateful for, every day?” This is how she thinks about the women in green: they are frightening and disorienting, but without them, she would be a “senseless fool.” She wonders “how to find bearable a life without women in green exhibiting their slippery silhouettes in the background.”

This book has been described as both memoir and fiction; among its many ambiguities is that of genre. NDiaye clearly embraces these ambiguities, even on the sentence level; as the narrator describes her experience, she again and again uses questions instead of statements. She is exploring, not concluding. When we look at Self-Portrait in Green as a memoir, the green women come to seem like the source of NDiaye’s art; she credits them with “my own originality” and sees them as “at once real beings and literary figures.” Self-Portrait in Green becomes, then, an exploration of the sources of fiction and the way that fiction and memoir mix. In this context, the opening and closing scenes of the book take on another meaning. These scenes describe the potential flooding of a nearby river, the Garonne, as it threatens to overflow the levees, to “spill over, submerge the streets, invade the ground floor of the houses, sometimes the second floor, sometimes the whole house.” NDiaye describes the river as feminine, and by the end of the book, it has become not just feminine, but another woman in green. The women in green, like the river, threaten to spill into the rest of the narrator’s life, to dissolve distinctions between memoir and fiction, to make the boundaries between real life and imagination uncertain. The book becomes a representation of the artist’s mind, questions, anxieties, pleasures, and all.

Marie NDiaye met her father for the first time at age 15, two years before publishing her first novel. She is the recipient of the Prix Femina and the Prix Goncourt, the latter being highest honor a French writer can receive. One of ten finalists for the 2013 International Booker Prize, alongside Lydia Davis and Marilynne Robinson, she is the author of over a dozen plays and works of prose.

Rebecca Hussey is a Professor of English at Norwalk Community College in Connecticut. She blogs about books at Of Books and Bikes .
Share This