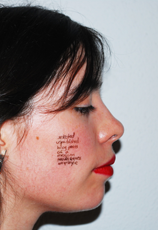 The second printing of Megan Boyle’s defiantly unclassifiable 2011 volume, selected unpublished blog posts of a mexican panda express employee, by avant-garde publisher muumuu house, affords an opportunity to reexamine one of the most innovative—and largely overlooked—literary creations of the past decade. The work’s initial appearance was largely ignored by the mainstream critical establishment; arguably one of its highest profile reviews came from a 17-year-old blogger named Bobby Auld on The Nervous Breakdown website. Yet the slim collection of assorted diary-style entries, dating from between January 2009 and July 2010, may prove one of the most lasting literary products of what has come to be known as the Alt-Lit movement. Boyle’s poetic-bloggetry (for lack of a better description) is the inevitable outgrowth of the confessional poetry movement that traces its roots from Delmore Schwartz and John Berryman through Robert Lowell and Sylvia Path to Sharon Olds, peppered with the post-modern sensibilities of Donald Barthelme. In short, her work is situated at the beginning of post-confessional literature.

The magic of Boyle’s writing is that she harbors no secrets. One provocative entry, “everyone i’ve had sex with,” stays true to its title; the author catalogs, in detail, mundane rather than graphic, her encounters with twenty-one male “penetrative” partners and two females. She reveals when she used condoms and on which occasions she enjoyed orgasms. Yet the goal does not appear to be titillate or to tantalize, nor to make emotional meaning of the experiences. Rather, she offers a subjective impression of the events, sometimes strange, often funny, always honest, but never particularly moving or breathtaking—the latter two absences seemingly by design. The writing is post-confessional in the sense that a confession implies something personal and private, to which the reader is given a precious glimpse, while Boyle’s approach suggests that even the most intimate details of her life cost her little to share with random strangers. She is unapologetically shallow, such as when she writes of one lover that “kyle was the most attractive guy at a Halloween party this year so we had sex in the basement.” She is shamelessly inconsiderate of the feelings of the men who will read these entries, assuming that they are true, such as ‘ryan,’ a friend of her partner jess, whose intercourse with Boyle she describes as follows:

Even in another piece entitled “embarrassing moments,” when she lists one of these moments as “email from my dad saying he’s read ‘everyone I’ve had had sex’ (age 23)”, her embarrassment does not seem to run particularly deep. Confession means giving of one’s interior. Boyle reflects a literary movement that strives, largely successfully, to break down the barrier between the interior and the exterior world. If a person has no secrets, a person can have nothing to confess.

Boyle manages to write relentlessly of sexuality, yet scours the material of even the remotest hint of romance or lust. She sums up her own effect with the line: “I want to replace my vagina with something more practical / but I still want to feel orgasms.” How far we have come from the emotion-laden and embroiled sexuality of Sharon Olds. In Boyle’s vision,

the goal of sex is to distract each other with your genitals, not necessarily to have orgasms / you just look at each other and forget what you’re doing but you keep doing it.

It is hard to imagine a conception of sex that is both less romantic and less erotic—a challenging feat. Boyle finds inspiration neither in Tess D’Uberville nor Lady Chatterley. Instead, her sexuality resembles the sort of punitive task that Thomas Gradgrind might create for his students in Dickens’s Hard Times. For a book whose pages brim with commentary on sex, Boyle’s prose is uncannily unsexual.

The second feature of selected unpublished blog posts worth noting is its relentless self-indulgence. Boyle appears to state whatever is floating through her mind at a given moment. Some of these observations are revealing: ‘i am still unsure what ‘life to the fullest’ for me would be, mostly i just try to be well-liked in social situations and not die’; others are strikingly in their banality: “i felt distressed when i found out I lost my wallet but now I accept that it’s gone.” Boyle has captured the mindset of a generation that posts and tweets before it thinks and believes its personal inclinations are worthy of public dissection. Fortunately, unlike many of her contemporaries, Boyle is witty and charming enough that her spontaneous reflections prove entertaining as well. Lest the reader fear she has created this effect by accident, the author sprinkles her text with clues that confirm she knows precisely where in the tradition of confession she stands. For example, in a piece entitled, “what Xanax makes me feel like,” she writes, “i wouldn’t want to read ‘swann’s way’ while feeling like this.” Proust may be turning over in his grave, but Boyle is grinning at having one-upped him in her willingness to bare all. Another piece, “life without the internet,” more explicitly states the nature of the world that Boyle attempts to capture. She writes that without the Internet, she’d be “moderately overweight and probably would have graduated on time” and she “would talk to more people and spend less time analyzing conversations.” But since the Internet does exist, and apparently is her world, she spends more time analyzing, and did not graduate on time, and embodies the search for instant connection and satisfaction that such a world spawns.

The concluding piece in Boyle’s collection, “lies i have told,” manages to merge the interior-exterior shattering and wallowing aspects of the entire volume in a clever, self-referential wrap-up. Many of the lies suggest the author has a troubled psyche: e.g. ‘i’m one quarter jewish,’ ‘i was molested,’ ‘i [am] allergic to honeydew melon.’ These are not the sorts of little white lies that carry most of us through the day. Yet by sharing these falsehoods, the author announces them to the world at large—and thereby undermines their potential use in all of her future interactions, at least with anyone who has read her book. Her prose and her off-the-page existence are now playing off one another in a fugue of exposure and self-sabotage. So when the last two lies turn out to be ‘I don’t really know what I’m looking for now’ and ‘i don’t want to have kids,’ the author is in fact announcing her quest for a relationship and children. Here lies the genius of a literary style in which the printed page and the world beyond have bled into each other. Much as Boyle has turned her psyche inside out, so that nothing remains unhidden, she has managed to purge the literary text of its most defining feature, namely, its distinctness from the world beyond the page. While both American post-modernists like John Barth and Latin American fabulists like Borges had blurred such distinctions before, the technique proves far more intense in Boyle’s off-the-cuff realism. Nobody really believes Barth or Borges is speaking to him or her, as a reader, personally. Or expecting an answer. With Boyle, one is never so sure.

Most writers aspire to create something different—to create a distinctive break from the past. Few succeed. The most talented of those who fail, such as Thornton Wilder, have the insight to recognize that they have not cleft the literary landscape in two. How rare, then, to find a volume that actually does so. It would be too easy to dismiss selected unpublished blog posts as quirky and solipsistic—and indeed, it is. But such a dismissal makes no more sense than rejecting Moby-Dick as monomaniacal or The Catcher in the Rye as disaffected. The world that Boyle depicts is itself quirky and solipsistic. Her ability to capture this sensibility with such precision, and with such indelible clarity, while at the same time amusing and compelling her audience, is reason enough to read this book. Most readers will never have encountered anything quite like it.

Megan Boyle’s work has been published by Thought Catalog, Vice, 3:AM, and Pop Serial. She can be found @meganboyle on Twitter.

Jacob M. Appel is the author of two novels, a forthcoming short story collection, and criticism that has recently appeared in the Georgia Review, Ploughshares, Boston Book Review and elsewhere. He is a psychiatrist at the Mount Sinai Hospital in New York City. He can be found at: www.jacobmappel.com.