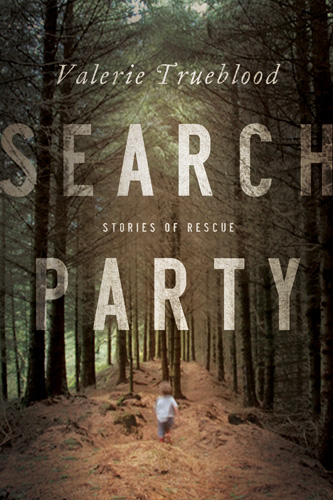 Valerie Trueblood’s Search Party is layered and wise. A thoughtful blend of vignettes and stories, these characters are marked by their separateness. They search for what might help them understand. Rescue arrives in unexpected ways.

Our lives, these stories suggest, are directed by nothing more than chance and circumstance. We might stumble into a new family, as does the narrator of “The Finding” when she asks her doctor for a ride home.

It’s likely we’ll encounter sorrow. Illness infects these stories. Parents are mentally unwell. They die. Spouses leave. Injuries make frequent appearances, often at the hands of others. The world is a dangerous, uncertain place. By adulthood, we all bear scars. We’re safest, perhaps, tightly coiled within ourselves. But scars compel us to search: What’s the point of all this? What about my plans? Who searches for me?

Some form of rescue occurs in each story. In “Think Not Bitterly of Me,” Abby’s childhood kidnapping is turned into a movie. After six years she was released, but that was not her rescue. By that time she loved the kidnappers, her “real parents.” The woman who snatched her, who chose her, was the mother Abby loved. Despite quibbles with the film, Abby sees in it her real rescue, when she grew into young adulthood, “ready for the life nobody could alter any more by what they did to her, because it was hers.”

Avoidance, deliberate or not, provides escape, a form of rescue. In “Who Is He That Will Harm You,” Mary Ann suffers brain injuries resulting from a savage beating. With almost no memory of it, she’s lost her “worry centers” and is indifferent to the details. She attends instead to her beloved son. People refer to her assault as “the episode.” In “Guatemala,” grown children visit their father following his stroke, which is called “the insult.” In “The Stabbed Boy,” a man is almost stabbed to death by his mother and left with scars, physical and worse, which his friends name “the damage.” Euphemisms soften what we can’t bear.

In “The Llamas,” a coolly removed businesswoman attends the funeral of her employee’s brother. She feels off-balance, surrounded by kind strangers without expectations of her. She drinks too much and can’t pretend her own relationships aren’t miserable. With this loving family and their sweet, simple llamas, she experiences catharsis, overdue rescue.

The heart of this collection is the final story, “Search Party.” Three-year-old Susannah has wandered into a neighbor’s cattle pasture and is missing for days. Volunteers spread out to find her. Susannah builds her life around this story, this moment of being sought. Her sister Jo was born prematurely while Susannah was lost. People say Jo lay in the incubator as if she didn’t know she’d been born:

And she, Susannah, living those days as secreted away, as potentially nonexistent, as if she too were not born. But she was sought: all the fields of the county were alive with searchers.

Susannah believes her story proves she’s a survivor. Jo’s story is different. She’s wasn’t sought; “No one saved her.”

Trueblood’s writing is gorgeous and complex. Many sentences are a pleasure to read and reread for their perception and skill:

‘Perhaps’ is a little clothespin not really sturdy enough, I’m afraid, for the vast wet sheet of the possible that I have to hang from it.

A lifetime may be distilled into a single paragraph. “Later or Never” is the story of Lawrence, a semi-invalid professor, and Cam, his young caretaker. A brief final paragraph sums up Cam’s life after Lawrence’s death:

Two years later she would be a wife…She would go on drawing but nothing would come of it. She would never, with all her children, be as married as this.

These stories unfold instinctively, anecdotally. One character’s story leads to another, and we move forward and back in time, as we do when alone with our thoughts. We remember, we wish.

Occasionally in Search Party the storytelling may become too leisurely for some readers. There’s a lot of contemplation. The narration interrupts itself, as a live storyteller might, as related stories are recalled. Several pages into “The Blue Grotto,” as Capri tends to the sick child she’s babysitting, she pauses to consider the sounds of names and how children tend to draw closest to one parent or the other. The author’s observations are always astute, usually gratifying, but now and then distracting.

Trueblood inhabits her characters, displaying deep empathy. We know these characters from the inside out. She attends to the finest details of human behavior. In “Search Party,” the neighbors regard Susannah’s mother as an outsider:

If you went over with a pie, this woman gave you back the pie plate at church. She did not seem to bake.

These stories brim with loneliness. Each character is searching. For what, they may not understand. But to search is to hope. Even, or especially when searches collide with tragedy, there is hope of rescue. Search Party is an intensely hopeful book.

Take your time with these stories. Allow them to reveal their layers of insight. Savor the language steeped in description. Consider the absence of fate and the power of chance. Know that everyone searches. Life disappoints and we want explanations, but life just continues. We must accept rescue, however found.

Valerie Trueblood is also the author of the award-winning novel Seven Loves and a collection of stories, Marry of Burn. She lives in Seattle.

Susan Rukeyser writes stories because she can’t stop. Believe it, she’s tried. Most of them are fiction. Her work appears in Necessary Fiction, Atticus Review, The View from Here, WhiskeyPaper, and Foundling Review, among others. Find her here: www.susanrukeyser.com