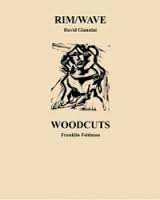 So many things fail to interest us because they don’t find in us enough surfaces on which to live, and what we have to do then is to increase the number of places in our mind, so that a much larger number of themes can find a place in it as the same time.

This is Giannini’s dogma; Rim is at once an accumulation and an explosion, coherent yet varied. Giannini proliferates the surfaces from which his poem casts its echo, punctuating the narrative with an unlikely assortment of borrowed texts pulled from sources ranging from contemporary Romanian poetry to an index of fictitious flora (Giannini lists his sources in a “Glossolalia” at the end of the poem). With these quotations, Giannini increases the number of surfaces on which his poem may live. Giannini’s bio indicates that he conducts his life along similar principles. He is a poet, a professor, a mental health innovator, an installation artist, a beekeeper, and a gravedigger. Ortega y Gasset’s prescription underlies the poet and the poetry, the lives of each bouncing off walls of assorted materials so that a drone becomes a chord.

The poem itself documents the rustic occupation of Rim, a farmer, recounting his labor through matter-of-fact details with occasional meditations on the objects he encounters—i.e. cedar chips: “Chips of blood and bone, Rim thought, the flesh of wood and its splintered skeleton.” Rim’s story is not extraordinary; on the contrary, it is as stripped of ornament as his daily chores. The story is animated by the raw facts of Rim’s labors and the uninhibited portraits of fallen wildlife.

An attention to physicality pulses through the text. When Rim feels “an energy wound up in his guts […] a sudden/ clench in his belly,/ a dark fist/ at the pit/ of him,” we are told that he “held it all in the quiet. He thought his body had reasons for its movings, logics apart from his will.” The debatable partition between physical and metaphysical logics may be the backbone of this text.

Giannini’s prose is earthly, engaged with the particularities of one man and the curiosity of his quotidian tasks. It is grounded, littered with concrete objects: an old Ford, a paycheck, a housekeeper, a scatter of crows. The pieces of collaged text are speculative, expansive, and mostly conceptual. Rim is an investigation of the relationship between these two poles—their interaction and their distinction.

Rim knew the pain/ in his gut/ was different from a name./ Sometimes a man boils,/ he though, boils beyond reason,/ boils in his own body/ quick with its own seasons/ until it lets him go./ As Rim thought that, his pain settled.

The lineation first tells us that “Rim knew the pain.” In isolation this line indicates both that Rim is familiar with pain, and that his familiarity is rooted in knowledge, not feeling. Rim understands the pain in his gut to be different from a name, the logics of the body to be different from the logics of language. We are presented with a distinction: the body is distinct from ideas. But then something changes. After musing on the way a man can boil beyond reason and then be released, his pain subsides. We are presented with an interaction: thought alleviates pain. While the hierarchy of this situation places thought above the body—immateriality above materiality—the line “until it lets him go” counters this. A man can be subject to the boiling in his gut until, independent of his own will, “it lets him go.”

Giannini’s investigation of this relationship is not only thematic; the form of the poem prods the same question. Reinforced by a different font, both bold and italicized, the borrowed fragments are visually distinct from the rest of the poem. Heavy-handed and lower pitched, these quotes are as weighty as their bolded typeface, and clunky as their font. And then there is the occasional fortune cookie credo, i.e. “What is called ‘strength of mind’ is the courage not to imagine our fate otherwise,” or, “To suffer is to produce knowledge.” Despite their obvious richness and gravity, some of these quotes read as tired maxims; the friction between the quotes and Giannini’s humble poem is alternately provocative and maladroit. In one example, Giannini delicately describes a red bird mangled and caught in a square of black mesh. Bolded and in quotes, the following line reads: “In birds is our stolen being.” It is unclear whether we are to map this onto the description it succeeds, to use it as an instrument in our reading.

Rim begins in prose, but dips frequently into a more formally poetic and lineated structure. The lineated portions move at a slower beat, giving the rote rhythm of the workday a renovated pace. Lines like “tongues/ rasping the salt lick” present a commonplace scene from any livestock stable in isolation so that the details of the image are not erased in the haze of the bigger picture. The blur of farm-work is broken down into its aggregates, restoring the intrigue to each of the pieces.

The final string in this braided and dynamic work is the woodcuts by Franklin Feldman that run through the poem. Perfectly in dialogue with the text, the woodcuts both bear the mark of intensive labor and achieve a coarse beauty. They are gestural and emotive, communicative yet often abstract. Though complementary to Giannini’s text, Feldman’s prints are an aesthetic feat in their own right.

Rim is followed by a more cohesively diverse collection of poetry. To The Wave: Poetry at Seacoasts is a motley array of poetic forms that touches on principles introduced in Rim while adopting an altogether different subject matter: water. The uniformity of theme acts as a control variable while the text roams and wanders into disparate terrain. Formally, Giannini is adventurous. Among both prose and lineated poetry are matrices to be read in any of many orders, and palindromic stanzas whose intriguing effect transcends what could otherwise read as a gimmick.

The collaged method pioneered in Rim is repeated in To The Wave. The seams, however, are far less visible, the typeface giving no indication that there are voices from elsewhere. In this fluid collage, Gianinni artfully uses the sea and its waves to parallel assorted phenomena, drawing connections and making un-belabored meaning. The consonance between poetry and the ocean, sounds and waves, sense and the sandy coast is recalled in a few of these poems. In “Beach” Giannini writes:

hold/ my hand—the sea// the poem// the sea/ is made/ of deep/ ending/ sounds—de-/ pending sounds.

The affinity between the sea and the poem is made explicit, but the suggestion of sounds being at once deep, terminal, contingent, and pending gestures to a web of other connections. To use Giannini’s words, it is “a small relation expanding.” The sound of “depend” and “deep end“—the latter obviously relating to water—performs the principle of which it speaks; sound is dependent on context for sense. And meaning, like rock, erodes under the constant wash of evolving vocabularies and updated registers. Yet, sand remains a conglomerate of rocks, albeit small ones. The form of the poetry often takes the shape of water. The reader chases evolving syntax that is reanimated by the new sequence of each line. The structure is mobile—it recedes like a wave. The hypnotic repetition of a wave hitting sand is mimicked in the repetition of sounds and phrases both within and across poems.

But the poetry does not merely assert a pan-harmony between all things. Doubt figures in through such stanzas as: “my love/ the difficulty in words/ accrues:/ to put myself in tune/ with their being/ & catch pitch.” Giannini points plainly to the difficulty of being “in tune,” of aligning the gears on different beings, of syncing the speaker with word spoken. In these poems the sea is never merely instrumental, never merely a tool by which we may better understand something else. Evidently, Giannini revels in the sea for the sake of the sea.

Giannini’s poetry makes us witness to his awe, and allow us to share it. Filled with off-beat internal rhymes and word play, these poems read as an attempt to communicate as much as an experiment in communication. The immediate musicality of the text is a gateway into the denser dynamics of these poems. A favorite reads: “Cord grass in the dieback/ zone—otherwise pockmarked/ muck blots this once lush marsh/ ‘gone by‘—/ her toes/ harrying a skink/ through beachgrass…”
Finally, perhaps the most pleasing aspect of this collection is the placid simplicity of the poems, which opens onto a bigger picture; “When the sea breeze/ crosses the hedge/ it loses its name.”

David Giannini is the author of three other poetry collections: AZ Two (Adashta Press, 2009), Within Eternity (Feral Press/Prehensile Pencil, 2011) and How Else? (Longhouse Publishers). Span of Thread, a full-length collection of his prose poems is due out from Cervena Barva Press in 2012. His work has appeared in national and international literary magazines and anthologies. His chapbook Side-Ways was also published by Quale Press.

Wendy Lotterman is a recent graduate of Bard College. Her writing and translations have appeared in Chronogram, Sui Generis, Documents Paradoxaux and Bard Papers. After graduating, Wendy pursued a brief stint as a farmhand in the Hudson Valley before heading southward to the outskirts of New York where she currently resides.