Refrigerated Music for a Gleaming Woman by Aimee Parkison 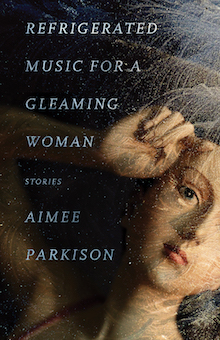 In Refrigerated Music for a Gleaming Woman, Aimee Parkison takes the beautiful, the lyrical, the emotional, and pins it tightly to the horrific, the satirical, and a sense of existential terror—an unsettling juxtaposition that leaves the reader both full and empty, singing and weeping. The twenty-three sparse stories of this thin, 83-page tome may give the impression of lightness, of a quick and easy read—but that is deception. This book weighs heavily.

Not permitted to simply revel in the gorgeous language, nor lose oneself in its dark and desperate images, Refrigerated Music forces the reader to experience, to inhabit, both at once. A line might begin in poetics, only to drop, halfway through, into a pit of ugly, failed humanity: “Hummingbirds enter the narrow bell-shaped petals of trumpet flowers as they feed, and yet the rest of us have to keep reminding the lovers that people are beheaded in burn cages as video cameras capture the moment for all to see.”

Parkison is not here to hold our hands. With raw honesty, painful humor, and sharp simplicity, she wields sentiment as a blade. She peels back the garish layers and masks of our cultural moment to reveal stark and terrifying emptiness.

There are points where the collection feels like two different books cross woven together. Sometimes the stories are fun and funny, hilariously absurd—but underneath this friendly exterior, a beast bares its teeth. Beneath the laughter is deep emotion. Emotion not as fluffy sentimentality—but emotion with bite, with grit, with abyss-staring, crisis-causing, soul-baring, full-bodied intensity.

Like its individual lines, the book takes us on a roller coaster ride along the peaks and nadirs of human existence, sometimes threatening to spin off the page. We get lost in the breathlessness of the language, the storm of image—to be suddenly dropped without warning, whiplashed, back to earth: by a woman cooking hamburgers on a corpse, a collectible used condom, a raging cow whipping a farmer, a jeweled child’s eye strung from a wealthy woman’s necklace. Parkison somehow, magically, manages to marry the satirical wit of Donald Barthelme with the lyrical power of Anne Carson. With some Stephen Graham Jones-style horror thrown in to boot.

The moments of humor and surprise don’t so much release tension as ramp it up, dial up the volume and frequency to the point of eardrum destruction. And while Parkison creates moments to breathe—lyrical vignettes with their own quiet power but with enough space to at least gasp a lungful of air—she never releases you, not until the last page, and even after that you’ll find that the final line has wormed its way under your skin, and you carry it with you.

Many of the stories are short snippets, half-page hybrids that shuffle between flash fiction and prose poem; longer stories are often splintered in fragments. But all of them are in conversation on the larger themes of violence, brokenness, and the tenuous beauty of human connection in the midst of a sociopathic society. Images and sounds recur throughout the book: a howling woman, the titular story’s refrigerated jars of music, that classic symbol of American corporate capitalism: the hamburger, abused/beaten/stolen women, broken bodies, lost children, fires—and these echoes help tie together stories that can be rather disparate in tone and voice.

In “On Flooded Roads,” one of the longer pieces, a member of a search party for a missing girl penetrates her own isolation through communion with ghosts of the murdered, and her adoption of old cadaver dogs who spent their lives on the scent of corpses. Ghostlike mirages, and the latent threat of violence and misogyny, flicker throughout the book.

Throughout the collection—the stories that spark and crackle and those that seethe quietly—a dynamism and violence and warmth burn in an intensity and combination rarely executed so successfully. In lines such as this, all of Parkison’s powers shimmer through: “The details of her blackouts taken as a bad dream in firelight, strange shadow moving between her legs, fingerlike, long lines, heat lacing her thighs. Even in younger years, her skeleton is a sign of strength smoldering inside her—child of paper, straw, and clay.”

One of the narrators tells us, “When I was a child, I set my house on fire. I was nine years old. My father never forgave me. What was it like, for him to call the fire department and wait for them to arrive, to get me and my mother safely out of the house, and then to stand outside with the neighbors, watching the house burn?” In some way, this is what it feels like to read Refrigerated Music: watching everything held sacred and dear, and everything also hated and despised, go up in flames. Parkison is burning the whole damn house down, and all we can do is stand there and watch. Or maybe, it sometimes feels, we’re still inside.

Aimee Parkison is the author of Woman with the Dark Horses, The Innocent Party, and The Petals of Your Eyes, winner of the Starcherone Prize for Innovative Fiction. Parkison teaches creative writing at Oklahoma State University. She has also taught as a visiting faculty member at the International Creative Writing Summer School in Athens, Greece, and as a fiction faculty member at Chautauqua Writers’ Festival.