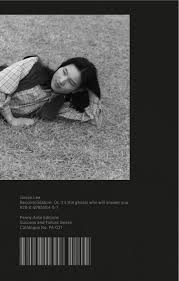 I read the majority of Janice Lee’s Reconsolidation on the floor of a grimy hotel bathroom. My reading was continually interrupted by surges of nausea. I broke mid-sentence, lunging for the toilet, then returned to the same sentence, reassembled where I was. In many ways, I feel this reading situation helped me experience the trauma that is Reconsolidation: Lee’s text is a desperate attempt (and failure) to reconstruct and encapsulate her memories in the wake of her mother’s sudden death.

Through her telling, Lee resists the authorial drive toward conclusion or thesis. Her narrative resists the formulation of a singular, definable story. In its place, she relates a “languid conversation, a merging of that space and this one…impossible to make out.” Reconsolidation is not a story about grieving so much as a book about the writing, the irreconcilable, polyvocal “processing” of one’s grief. It details the literal havoc that writing exacts on the writer’s recollection, the way memories are destabilized each time they are accessed. Though the death of Lee’s mother is horrible, Lee recognizes that the real tragedy (at least, within this book) is not her death itself. The tragedy is that Lee needs to write this book, even while knowing that the writing process kills her memories.

Reconsolidation beautifully performs the evolution of her writing, allowing the reader to experience some aspect of Lee’s personal loss. Throughout her text, Lee acts as a curator, strategically interweaving her personal experience and reflections with bits of ephemera: an online questionnaire to diagnose OCD, imagined and remembered bits of conversations, copies of Lee’s mother’s death certificate, Lee’s self-interrogations, the officially named “place of final deposition.” She incorporates numerous quotes from writers she admires, including Sebald, Appebaum, Cartsen, Robinson, Barthes. One especially resonant quote from Jacques Derrida reads:

[I]f I’m a ghost, but believe I’m speaking with my own voice, it’s precisely because I believe it’s my own voice that I allow it to be taken over by another’s voice. Not just any other voice, but that of my own ghosts. So ghosts do exist. And it’s the ghosts who will answer you. Perhaps they already have.

Lee’s text is an act of (active) assemblage, an emotional bricolage that performs in the same way as the act of memory. These writers are the ghosts that haunt Lee’s Reconsolidation. Or, perhaps it’s more apt to say that Lee’s book is haunted by writing.

In this manner, Lee provides a gauzy entrance to her memories, the landscape she’s re-writing as she writes. She pans in on her mother’s death, forcing herself to inhabit the most painful physical details, attempting to trigger herself, to “be” there, fearing she wasn’t “there” enough within the moment. Lee questions the reliability of recollections, recounting a violent fight with her mother that her mother “didn’t remember at all.” She questions what she sees and feels, what she tries to see and feel, where to begin, where to end “a story about death.” Lee writes:

This text becomes a repository of certain memories, all of which will be changed or recreated by the end. The memories, and consequently the text, becomes subject to continual adjustment and modification. Simultaneously, the ghosts shift, ask new questions, recollect their own memories, and when a passerby knocks at the door, I open it with a welcoming attitude. In my dreams I catch myself spying on myself, I become the ghost haunting myself…

For this reason, I trust Lee’s voice as a narrator. She does not attempt to stifle the echoes of ghosts. She only manipulates the reader insomuch as she shows us the seams of her writing, the dreamlike world of memory where she catches herself spying on herself. Likewise, she is honest about the limitations of her text: what it is, what it isn’t, what it wants to be (but cannot be.) “Is all mourning so similar?” Lee asks near the end of Reconsolidation. “I want so much for mine to be unique.”

What Lee ultimately gives the reader is a shared experience, the recognition that, with each successive reading, written words accumulate sensations. As with reconsolidation, they acquire a new patina, absorbing the reflection of their reader.

Janice Lee is the author of Kerotakis (Dog Horn Press, 2010), Daughter (Jaded Ibis, 2011), Damnation (Penny-Ante Editions, 2013), and The Sky Isn’t Blue (Civil Coping Mechanisms, forthcoming 2016). She currently lives in Los Angeles where she is Editor of the #RECURRENT Novel Series for Jaded Ibis Press, Assistant Editor at Fanzine, Executive Editor at Entropy, and Founder/CEO of POTG Design. She can be found online at janicel.com.

Meghan Lamb lives with her husband in St. Louis. Her work can be found in The Collagist, Pank, Necessary Fiction, wigleaf, and other places.