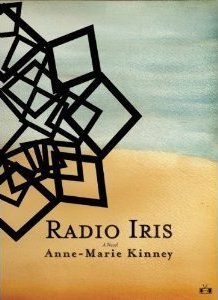 Novels of work, particularly those that take on modern laboring in all its absurdity and confusion, are a favorite subgenre of mine. From Magnus Mills’s fence builders and bus drivers caught in bureaucratic nightmares to the bizarre and often brutal administrative interactions of Lydie Salvayre’s Everyday Life or Stacey Levine’s Dra—, it’s a fictional category of which I apparently can’t get enough, and Anne-Marie Kinney’s recent debut Radio Iris is a superb entry into that field.

Kinney’s titular protagonist is alienated in body and mind, and the novel opens with conflicting messages from her own senses:

Iris feels goosebumps rising on her forearms, but hesitates to touch the thermostat. Her synthetic leather pumps are filling with sweat, creating an embarrassing squeak when she walks, but those tiny bumps on her arms are rising up in mute defiance. Her ninety-nine-cent eyeliner is melting, a line of chocolate brown stamped now in the creases of both eyelids, but her lips are cold and chapped. Her body cannot agree with itself, and it is two minutes after two o’clock.

As a receptionist, Iris is positioned to see the most of her coworkers, yet apart from a woman who has just been fired and a man who vanishes only for his former office to become a junk room as smoothly as if it had never been anything else, she encounters only her boss on rare occasions. It is unclear to both Iris and the reader if anyone else works in the office at all. Even communications that should bring interaction only increase the alienation, as when her boss asks semi-rhetorically what a telephone is for, or when Iris arrives one morning to “thirty-three messages in her voicemail box. The first twenty-nine are a misguided fax machine.” Yet Iris, cut off as she is, “sits through each high-pitched squeal until the system gives her the option of erasing it.” Eavesdropping, in other words, on a conversation between two machines, which might be the closest she comes to workplace conversation that day.

For Iris and those around her, the division between work life and home life has blurred and broken down, as it has for so many of us. This emerges from the novel in a number of ways, but none so pronounced as the Bartlebyesque character Iris discovers living in the office suite beside her own, going through ordinary domestic routines in a space meant for work. His occupation is the extreme incarnation, or perhaps the inevitable outcome, of Iris’s own earlier and earlier arrivals at the office despite being repeatedly told by her boss not to come before nine o’clock, and of her near-total reliance on her job —vague as it is—to define her identity. Despite occasional meetings with her friend Mallory, who urges Iris into unwelcome dates with various men, she is fairly solitary and takes a greater interest—albeit largely unrequited—in the mysterious neighbor than in any of the men Mallory provides. She takes comfort in the routine and meaningless stasis of work, even in her key to the office being

Change is terrifying for Iris, whereas being one more anonymous bearer of a key generations removed from its original owner is reassuring. She enjoys going through the motions for their own sake, and Kinney introduces a number of seemingly significant narrative threads only for them to amount to nothing (plotwise, that is; they are crucial to the graceful achievement of the novel). The best of these is a meeting for which Iris spends the morning preparing, procuring coffee and supplies and setting the room up just so, only for the meeting—predictably, in hindsight—to not occur. It’s the disruptions to routine that are troubling, because, “When things in the office are broken, no one knows what to do.” Iris isn’t alone in this, because after losing her own job and despite insisting she’s glad, Mallory faux-ironically praises her freedom and declares, “I feel so unencumbered I could puke.” Even the mysterious neighbor in his office/home receives delivery of a piano and when Iris asks why, he tells her, “it seemed like a nice, heavy thing to have.” Heavy enough, perhaps, to hold down an identity with nothing else to ground it.

I’ve so far made the novel sound as if it is only about Iris and her office life, but while that is the bulk there’s a whole other layer I haven’t touched upon. Interspersed with the chapters following Iris are a few chapters following her brother, Neil, a salesman who travels almost constantly. He is no less alienated than Iris, yet rather than embracing dull stasis, his response—as in Walter Kirn’s Up In The Air —is to outrun himself as best he can. Even a brief delay on a runway brings immediate suffering in our first glimpse of Neil:

He looks out his small window at the tarmac. They’ve been sitting on the plane now for over forty minutes with no sign of imminent movement— negating the point of the early flight altogether— and he feels pins and needles rushing through every inch of his body, an impotent fury at this halted momentum. His iPod’s dead, but even if it weren’t, he’s sick of everything on it, pressing skip, skip, skip, because the song titles telegraph the whole song he’s heard seven hundred times so he doesn’t need to listen to it, so he skips, and skips.

There are also Iris and Neil’s parents, further offstage in the novel, people who move so often they at times forget to give an address to their daughter before packing up for their next home. Those layers are rich and complex, and give depth to Iris’s troubled sense of herself.

Yet those elements of the novel that are “heaviest” and most pin it down gave me an ironic twinge of loss and regret. The threads that develop Iris’s family are some of the most compelling sections of an overall powerful book, but there’s a way in which they make the story specific (and I’m trying hard to avoid spoilers here) by resolving some of its earlier vagueness through the introduction of a particular past traumatic event. So rather than the ambiguous but quasi-universal image of alienation in the modern workplace Radio Iris becomes a personal, tragic, but far less ambiguous story. As affecting and even wrenching as those revelations are, a part of me was sorry to see the book move away from that fuzzier engagement of the cultural landscape to focus more closely on the emotional landscapes of a particular family. To be clear, though — even overclear, in case I’m making it sound otherwise — don’t take this in any way as a complaint: the directions the novel goes in are more emotionally charged and more raw than I expected and are deeply, deeply affecting because of it. In an idiosyncratic way, though, I find myself wishing the novel could have somehow remained both vague and specific at once, or that I could have followed two different versions of Iris. Which seems particularly unfair of me, considering how hard Iris struggles against the painful realization that her life could be fragmented and spun off in any direction as easily as other lives she’s seen break.

Anne-Marie Kinney’s work has appeared in Black Clock, Indiana Review, and Keyhole, and has been performed by Los Angeles’s Word Theatre. Radio Iris is her first novel.