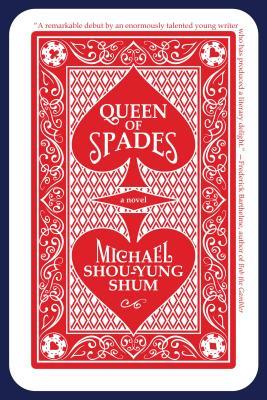 With his debut novel Queen of Spades, Michael Shou-Yung Shum creates a literary link between two unlikely places — Imperial Russia in the 19th century and Snoqualmie, Washington in the 1980s.

Shum’s novel is a spiritual successor to the Alexander Pushkin short story of the same name published in 1833. While the basic premise remains true to Pushkin, what makes it more a successor than a retelling is an expanded cast of characters that allows for more exploration of the themes established in the original.

While Pushkin’s story is centered firmly on magic, this Queen of Spades presents the tension between mysticism and method in the gambling world, lending equal weight to systems and gut feelings. It’s Shum’s exploitation of the latter that leads to the novel’s most gripping moments, when the reader is sure that a character’s hubris will be his or her downfall.

The plot of both Queens features a mysterious Countess who holds a seemingly supernatural knowledge of the card game Faro. In the original, she’s pursued by a desperate army officer, Hermann, who wants to know her secrets — a chase that ends in her death. But according to some interpretations of the story, she has the ultimate revenge. She returns to haunt the officer as he lays a bet and ultimately loses his fortune.

Shum dispels almost all the myth around his Countess. She is instead a scientist, one keenly interested in the mechanics of probability, which explains why she spends her late nights at the Royal Casino, watching but rarely placing a bet. However, Shum includes details about her person that make the reader question whether that’s all there is to her, or whether she is actually a supernatural figure — possibly even the ghostly presence from Pushkin’s story. Her vehicle of choice? A Rolls-Royce Phantom.

Each character in Shum’s complex but tight web is fully realized and clearly informed by the author’s own experiences as a dealer. The Countess’ pursuer is Arturo Chan, a newly-arrived card dealer at the Royal Casino. He is drawn to the Countess from the minute he sees her, becoming obsessed with learning her habits and her betting method.

Chan, according to the author’s note, is based on a real person from Shum’s past. He is repeatedly described as a serious and studious figure, one who shies away from gambling in his personal time, and thus his presence adds brass to a story about vice. But even he is inclined to test the intangible side of his profession: he visualizes his cards before he deals, something of a superpower that links him to the Countess. It’s his pursuit of her that drives the main action:

The Countess was regarding him curiously. This close, Chan was struck by the intelligence in her withered face: her veined hands that sat one upon the other on the table, a magnificent lower jaw bespeaking centuries of royal breeding.

“You appear to have developed an unusual level of interest in our activities.”

“Do you understand why?”

“No — not fully. But I am interested in your way of gambling.”

“You are a dealer. So you must perceive more than most the vagaries of chance.”

Chan’s foil is Chimsky, another dealer whose twists and turns of fate most resemble those of Hermann in the original story. He gambles based on his feelings, concocting betting schemes to avoid financial disaster. Despite the character’s capriciousness, Shum deals Chimsky a fair hand. Sometimes his plays are rewarded, and sometimes he is punished for his impulsiveness.

It’s disappointing to see some of these vivid characters like Chimsky drop out of the narrative before the end of the novel. Their plotlines are tied up almost too neatly in some cases. However, that’s more an indicator of the readers’ investment in them than a true fault of the book.

Shum continues to explore magic and realism through Steve Mannheim, a pit boss with only six months left to live. He functions as the inverse of the stereotypical depiction of a gambler as he is most grounded inside the walls of the casino. Outside, he loses time, slipping into fugue states of sociability caused by his debilitating illness.

Mannheim is counseled by a therapist and her young nephew, a prodigy who sees auras. Their discussions in preparing their patient for his demise are another way that Shum pits the metaphysical against the practical — is Mannheim experiencing true spiritual growth as he nears the end, or is he simply a very sick man seeing things?

Shum’s writing shines in particular when he describes the atmosphere of the casino, the bleary Pacific Northwest setting and the mechanics of gameplay — topics he’s well-versed in. By the end of the book, the reader could learn how to play at least the obscure Faro.

There are multiple games of chance described in the book — from poker to Faro to horse racing — but what keeps them from getting repetitive is that they don’t read as a simple blow-by-blow. Instead, Shum builds page-turning suspense without venturing into cheap melodrama.

He writes of a horse race:

The lead was now down to two lengths, then one and a half, then one, then only a neck. Less than a hundred yards remained… They thundered across the finish line amid the flashing of camera bulbs and raucous cheers from the sparse crowd.

Chan and Dumonde did not look at each other. Their eyes remained on the tote board, breathlessly awaiting the results to be confirmed and posted.

The tension in the ending of this chapter, and many other chapters, compels the reader to cover the last page to avoid spoiling the last few sentences.

Shum’s descriptions of the act of dealing are also romantic, making the reader picture the texture of a new pack of cards, or consider the minuscule changes in weight that a face card might have over a number card. The queen of spades card in particular is given consideration as one of the weightiest cards in a deck. However, unlike in Pushkin’s story, the queen of spades is ultimately not the card that decides the outcome of the biggest gamble in the novel. In this way, Shum gives his readers an experience not unlike a card player seeing his expectations shatter. The dealing of this final card is, however, a nod to the original story in a different way: it leaves the question of whether the main character miscalculated, or whether real magic was at play.

Another departure from the Pushkin is Shum’s unwillingness to pass judgment on gambling and gamblers. Some have interpreted the end of the classic story as a punishment for the greed of the main character. Shum instead presents a cadre of gamblers in various stages of addiction — one whose debts are ruinous, another two struggling in recovery — as wholly human, full of fault and contradiction, who see both success and failure.

Queen of Spades is overall a brilliant work, fit for both fans of the original story who want to pore over the thematic links, and readers looking to pick up a gripping new novel. For a story that touches on the addictive nature of card games, Queen of Spades is itself a difficult book to put down.

Born and raised in Houston, Texas, Michael Shou-Yung Shum eventually found himself dealing poker in a dead-end casino in Lake Stevens, Washington. Two doctorates bookend this strange turn of events: the first in Psychology from Northwestern, and the second in English from University of Tennessee. Along the way, Michael spent a dozen years in Chicago, touring the country as a rave DJ. He currently resides in Atlanta, Georgia, with his spouse and three cats. Queen of Spades is his first novel.

Aleksandra Appleton is a journalist and writer based in California. Her work has appeared in Narratively and BuzzFeed, and can be found at aleksappleton.com.