Queen of Flowers and Pearls by Gabriella Ghermandi 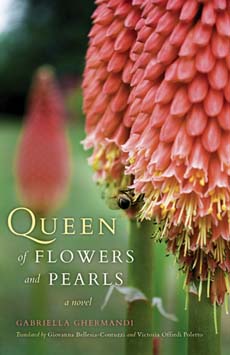 Queen of Flowers and Pearls by Gabriella Ghermandi is a coming-of-age novel, an exploration of colonialism and war, and a study of cross-cultural conflict, but at its heart it’s a novel about storytelling. Ghermandi announces this theme in the novel’s opening sentence, spoken by the protagonist Mahlet: “When I was a little girl, I was constantly being told by the three venerable elders of our household, ‘You are the one who is going to tell our stories.’”

The main plot has a very simple arc, but the novel is full of tales that entertain while also revealing the costs of colonial occupation. It is set in modern-day Ethiopia with flashbacks to the time of the Italian occupation in the 1930s and the political unrest of the decades that followed. Mahlet is at first a young girl listening in on the stories of women and old men, then a struggling adolescent learning about the political world around her, and then an ambitious student in Italy, isolated but determined. She has always had a special relationship with Abba Yacob, one of the elders living in her crowded household. He extracts a promise from her that she will write his story of joining resistance fighters to battle the Italian occupation. His story, given at length, is the first of the novel’s several interpolated tales, the others coming in the second half of the novel as Mahlet meets others with varied experiences of war, resistance, and colonial rule. There are tales of victory as the Ethiopian fighters thwart an ambush by the Italians, of loss as the Italians massacre Ethiopian families, of inspiration as young girls run away to become warriors, and of shame as an Italian man grows to love the Ethiopian language to try to atone for the wrongs of his country. These stories together take up a significant portion of the novel. The relationship between Mahlet and Yacob is the novel’s through line, but the narration ranges far from these central characters.

Ghermandi shows how much at stake in all these stories: they are how the “truth” is created. The “truth” for many Italians is that they brought civilization to Ethiopia, and only a powerfully-told counter-narrative can belie that idea. A young Italian girl writes to her father wanting to know “if this darn civilization had been delivered and if he could finally come back home.” In response, he says, “I have to tell Lucia that it is not true. We did not come to deliver civilization but to destroy one, just like the barbarians did in the past.” The stories Mahlet hears back up this latter view as they complicate the self-justifications of the Italians:

I thought about their stories. How much their words contradicted what I had heard people in Italy say so many times: “We built roads, schools, homes for you…” Each time, I had smiled, and it was a bitter pill to swallow, but now it would be different. Once I was back in Italy, the first person who dared make those stupid comments would get an earful.

Stories are a form of power, giving Mahlet the ability to argue against those who misunderstand her country’s history. The novel celebrates the ability to listen to many perspectives: the storyteller is important, but so is the one who listens deeply to the story. The mistake the Italians made, argues one character, is their failure to “look at themselves from the outside, through other people’s eyes.” He says, “only when you agree to look at your image reflected in other people’s eyes can you see and take stock of yourself.” Ghermandi’s novel as a whole can be read as an encouragement for Ethiopians and Italians alike – and all readers ultimately – to be willing to hear the stories that will reveal who they are.

Mahlet begins the novel comfortably surrounded by her family, secure in who she is and her place in the world. Her coming-of-age journey, however, forces her to leave not only her family and, temporarily, her country, but also to lose her identity as an Ethiopian. After she returns home from her time in Italy, strangers regularly ask where she is from, and she has to assert her identity again and again. She begins to live as a person between cultures. It is from this vantage point that she is able to understand both cultures more deeply. She has much to say, for example, about how Western culture seems to isolate people and how differently the Italians approach grief and loss from the way the Ethiopians do:

According to them, solitude would help me abandon myself to sorrow. It was their way of grieving. I wanted to tell them that for me it wasn’t like that, that solitude would have made my sorrow more acute and unbearable. But they were Italian and I was Ethiopian. A deep, wide gulf divided our ways of living.

In a time when young people are leaving Ethiopia and becoming westernized, she is committed to returning to her home country; she will not “have [her] roots slashed by the ills of modern life and by Western consumerism.” But she is committed, also, to understanding both sides of the “deep, wide gulf” between cultures and to doing what she can to at least keep the gulf from widening.

As much as the novel is about the power of stories – stories are the “flowers and pearls” of the title – it’s also about the burden of being the storyteller. Mahlet repeatedly resists the notion that she will be a writer, in the face of many assertions otherwise. Telling a story requires an act of memory, and memory can be painful when one’s cultural history is troubled. The central plot revolves around Mahlet’s inability – refusal? – to remember her promise to Yacob, and another character tells us, “Our people do not like recounting stories about the Italian occupation, even when asked to do so. They toss out a few sentences and manage to talk without revealing anything.” As much as the characters may not want to tell their stories, the novel itself glories in them. This leads to some tonal and structural awkwardness as the novel asks us to accept that the world stops while characters tell their tales at length, fluently and without pause. But if the reader will accept this artifice, the “flowers and pearls” on offer are indeed beautiful.

Gabriella Ghermandi was born in Addis Ababa and lives in Bologna, Italy. She writes and acts in narrative plays that she produces in Italy and Switzerland. She also conducts creative writing workshops for schools. This is her first novel.
Giovanna Bellesia-Contuzzi is Professor of Italian Language and Literature at Smith College. Victoria Offredi Poletto is Senior Lecturer in Italian Emerita at Smith College.

Rebecca Hussey is a Professor of English at Norwalk Community College in Connecticut. She blogs about books at Of Books and Bikes .