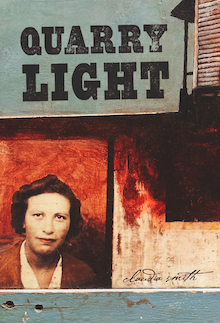 A pair of twins and their friends ogle beach parties from the safety of a balcony while watching the twins’ mother dance away the nights; the girls envy the mother’s freedom, yet they do not understand the danger she courts each night. A young woman tries her hand at social networking, but fears the man hitting on her over MySpace is actually her father. A girl on the cusp of pubescence hears skittering in her walls and dreams that the noises are communiqués from her imaginary friends, the rat-boy Nazrat or the waifish Daisy. A pregnant and unwed intern at a textbook company attempts to avoid repeating her mother’s mistake of poor taste in men. A librarian returns home from her hoarder grandmother’s funeral to discover that an elderly, obese beagle has taken up residence in her front yard. And a teenager, with her trust and gentleness still intact, sews bandages onto a doll for each bruise her mother receives at the hands of abusive men.

For these women in Claudia Smith’s Quarry Light, love is a cruel sculptor, chiseling their forms from the raw ore of their experiences. These six stories — delicately crafted but worded with the resilience and strength of stone — are stark reliefs of women surviving wounds inflicted by those whom they adore the most. But this collection is also a monument to how, in the hands of an expert craftswoman, experiments in literary form re-tool the ways in which we encounter and understand stories of the traumas and losses that either shatter or harden the human heart.

To this end, the forms of the flash fiction, the short story, and the novella are as essential to Quarry Light as the emotional resonance of the stories’ content. Smith’s collection plays with each of these forms, troubling Frank O’Connor’s position in The Lonely Voice: that the short story’s celebrated knack for brevity is largely irrelevant. After all, the pieces in Quarry Light revel in compacting the complexity of lived experience into the substance of a significant image or detail. For readers of Smith, this is hardly surprising, as her previous work in short forms has won her recognition through two Pushcart nominations as well as her prize-winning chapbook The Sky Is a Well and Other Shorts (Rose Metal Press, 2007). Quarry Light reveals the further honing of Smith’s craft, a storytelling that transports the emotive force of flash fiction’s compressed and lyrical lines to the longer forms of the short story and the novella.

The two flash fictions in the volume — “Red” and “Babyfat” — are fraught with the dangers of trust, and it is Smith’s frank, direct diction that makes the characters’ plights feel like the reader’s own. “Red” redeems the color from the catalogue of symbolic clichés that Taylor Swift shambles together in her song of the same name. Instead, Smith’s “Red” is a daring hybrid of flash fiction and prose poetry, which like time-lapsed footage reveals a girl’s gradual discovery that she can rely on nobody’s promises. The narrator reflects on her mother’s bruises, which have become her own psychological scars:

A doctor once asked, How did this happen? and she [my mother] said, A fall from a tree, and when she said it, the tree grew. I see it now, oak, old, hammered ladder steps and a brick-red tree house. Fall leaves around it. It’s the tree house he [my father] would have built me, the one he drew in the pavement, the one we jumped into, holding hands. See, another man says, You can’t even talk about it. Tell me everything. I tell him nothing.

This is a startling passage, in which actual memories begin to blossom, the boughs of the girl’s imagination burgeoning with the potential for renewal — a tree house, a bond with her father, the joy of a playful childhood. But the petals remain unfurled: the oak sheds its leaves, and her father has never built the tree house. There is nothing she can tell, nothing she can entrust to another.

“Babyfat” offers a similar caution to its readers. The story commences with a young woman receiving a MySpace message from a man she believes is her father, and the piece concludes when Smith transforms her protagonist’s evening patrol of her apartment complex into a resonant metaphor for the unbridgeable expanses between a woman and her world:

Before going to bed, she walks around the apartment complex. People are on their balconies, laughing, smoking, drinking their beer. She can hear an ice maker and a small dog yelping. Fall snaps at her bare arms and legs. The stars are too bright, they hurt her eyes.

The young woman is severed from their society, their jokes, their social smoking and drinking. Here, Smith evokes the myth (only to dispel it) that the lonely are somehow inferior to those with friends, with families. The partying people are literally elevated on their balconies over the young woman, but that celebration is haunted by loneliness — the girl prowling, the icemaker clattering, the dog howling. They seek out some communion with the night, but nature itself resists their company when autumn like a cornered animal nips at her skin and when the lofty stars — a visual echo of those balcony partiers — burn her eyes. In style, theme, and message, these two flash fictions are effectively primers for the other pieces in Quarry Light, which continue to remix and ruminate on the wisdom that a coworker delivers to the protagonist of “Babyfat”: “You should watch what you say to people. [. . .] Not everyone wants to protect you, you know.”

But the real innovation in Quarry Light is the poise with which Smith transfers the pathos and haunting imagery of flash fiction into the longer forms; Smith’s collection is not merely a poignant object lesson in the inscrutability of human relationships, but a visionary example of how the lyrical eye of the flash form can renew, with sentiment and gravity alike, short fiction’s traditional forms. Smith does so through a canny and always apt attention to the physical details within her stories, and these objects become tokens of repressed fears, longings, and hurts. In “Catgirl,” the volume’s opening story, Tricia returns to the beaches of her childhood with her distant husband and their daughter. This trip — which Tricia hopes will restore to their family hearth the spark of love — instead recalls the night that she and her twin sister forever surrendered their childhoods. Again, the environment in Smith’s work resonates with the struggles of her characters: “[Tricia] thought the ocean might frighten her daughter, but as soon as she saw it, Audrey wanted to cross it. The ships, bigger than castles, the way the sky seems so much higher than it does at home — it’s Tricia who feels small and afraid.” Here, the waves crashing against the shore contribute to the sensation that the past overwhelms this story, and Smith then sails effortlessly upon this current into Tricia’s electrically vivid past: memories, tinged tragic by her innocent friend Allie’s death, that likewise shrink Tricia as she recalls how “Allie Saenz was a tall, leggy girl.”

Smith selects these most precise, these most significant, details to lull us into a dreamy present that has never quite awakened from the nightmares of the past. Here, she toys with another creative writing workshop dictum: John Gardner’s famous claim in The Art of Fiction that details “create a kind of dream in the reader’s mind, and avoid like the plague all that might briefly distract from that dream.” Smith steps beyond Gardner’s formula, because the dream states she fabricates in her stories enmesh her readers in the characters’ own failures to escape their reveries. In the novella-length “Lucy,” librarian Tammy must push through such a haze after the death of her grandmother, a hoarder and Holocaust survivor, leaves her questioning her memories of her mother, her sexual attractions to her co-workers, and her relationship with the elderly, obese beagle whom Tammy adopts and names Lucy. Because Tammy cannot rouse herself from her daze, the reader feels a restlessness — a desire to dive in and haul Tammy from her muddled life — as she projects her longing for a lover, for her mother, and for her grandmother onto Lucy’s sloped shoulders. But this novella denies Tammy’s yearning for a family by juxtaposing her mother’s delusional faith in a lover against the resonant detail from which Smith draws the collection’s title, Quarry Light:

The lover was meant for a woman like [her mother] Audrey and a daughter like Tamara. As her mother spoke, weaving her hands in and out, biting her bottom lip in anticipation, Tammy could taste it too, all that fresh baked bread and the languages they’d learn, the adventures they would have. She believed it, utterly, and yet she knew even then that as soon as her mother left the room she would stop believing.

The town was known for its gutted granite quarry, and Audrey took Tammy swimming there. Tammy loved the quarry’s cold, clear light. Coming in from a sunlit morning into her grandparents’ den, curling up against the itchy sofa with a cup of tomato soup and an afternoon of 1970s sitcoms after all that clear cold air, it was one of her favorite things in the world.

Smith’s language here is crisp, cold and biting as an autumn wind or the brisk waters in the quarry lake. The passage is a provocative tussle between a wounded young woman who applies memories like bandages and the novella’s narrator who knows, better than Tammy herself, that this pain cannot be staunched. So, Smith jockeys her readers between the mother’s belief in a lover’s stilted promises and Tammy’s knowledge that — as soon as these people exit her life — their promises become no more tangible, no warmer, than the coldness of morning light in the quarry.

Quarry Light is a collection of short stories as playful as they are serious, as entertaining as they are dire, and the people of Claudia Smith’s narratives become real and provocative reminders of the humor and the horror alike that define human relations. It is Smith’s penchant for locating the perfect details, however, that grounds us in the lives of these women, as they attempt to navigate the debris, laden with memories and associations, of their connections. Still, the women survive, outlasting the injuries inflicted by the men and matriarchs who had promised to defend them. Yes, love in Quarry Light is indeed a cruel sculptor in its designs on these women, but Smith herself is a master architect, building her stories with a vision that regards the perseverance of these women as the noblest of causes.

Claudia Smith is the author of the flash fiction collection The Sky is a Well and Other Shorts, which was reprinted in Rose Metal Press’s book A Peculiar Feeling of Restlessness. Her second collection of flashes, Put Your Head in My Lap, is available from Future Tense Books. Her stories have appeared in numerous anthologies and journals. Learn more about Claudia’s work at her website, http://claudiastories.com.