Principles of Navigation by Lynn Sloan 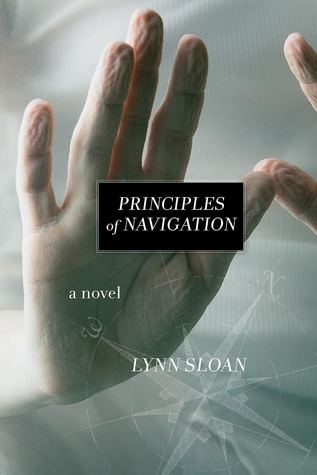 Lynn Sloan’s debut novel Principles of Navigation explores the uncertain terrain of marriage through the eyes of Alice Becotte, a newspaper reporter. Alice lives in Haslett, a small town in Indiana, a town that she settles in with her husband Rolly when he lands a tenure-track job in the art department at a small local college. She follows him to the small town from Chicago after he completes his MFA in sculpture. This move, which happens eight years before the novel opens, seems to steer the course for the rest of the book, asking the reader what a relationship makes us surrender of ourselves, and which sacrifices are too great.

Alice and Rolly are divided by her desire to conceive a child and his obsession with his professional future. But the novel is clearly more complicated than that. This novel joins a larger tradition of novels that engage the domestic; Sloan reinforces the tradition in some ways, but largely complicates it. On the whole, she’s made a lively and important contribution to what is often considered a lesser form of the novel. Sloan pushes back against stereotypes of gender and familial life, making a claim to a new and urgent sense of the domestic.

The book begins with Alice staring at a photograph of her wedding day with Rolly, some eight years ago, and remembering that he said that they were “perfect” in that photo:

They’re in the Chicago art gallery that represented Rolly’s work back then, standing in front of an expanse of windows that open onto a garden dotted with bronzes. Both of them wear ivory linen, her dress modern, and his suit vaguely nineteenth century…

This beginning scene, or at least the photograph gazed upon within this scene, seems clearly referential to Jane Austen’s novels and many domestic novels of this era that culminate with a wedding ceremony. But instead we begin with the fantasy of the wedding. Rolly’s character seems to believe more wholly in the fantasy. His dated suit, the fact that his work creates an identity for the couple, bowing to the patriarchal tradition of a man’s work being the center of the family and his life, and in turn his wife’s life, all point toward his character’s fascination with the past and perhaps his chauvinist view of familial life. Sloan has pointedly created a contrast between husband and wife. Her meaningful attention to gender roles begins here.

But if a domestic novel begins with a wedding, where does this leave the reader? It seems the reader is left to experience what happens in the mundane and realistic version of a marriage. Another characteristic of the traditional domestic novel is the inclusion of a heroine who aligns herself with storytelling, bonding the heroine to the omniscient narrator. Here, Alice isn’t as much a storyteller but a reporter of news, news that ultimately becomes sensationalized by the local paper where she works. Alice is keenly aware of the facts that define this town and the fictions that some residents create. Some are more horrific than some people would expect from small town America. The shadow of the impending Y2K seems to shade everything in the town. Sloane links Y2K with many oddities. A local girl, Heidi Fender, claims to see the Virgin Mary in the cornfield of her family farm. When Alice goes to the farm to investigate, Heidi senses that Alice is newly pregnant and hasn’t told anyone. Alice feels a great affinity for Heidi. Her own pseudo-religious fascination with Virgin Mother began when her colorful mother sent her a postcard of Our Lady of Guadalupe while vacationing with her over-40 girlfriends’ group. Alice fixates on the postcard and even asks the image for a child. (Her mother, Patricia, is also a well-developed character who seems both selfish and self-involved but remains at her daughter’s side in her own way . She makes the reader wonder when a mother’s life begins and what are acceptable levels of devotion; she also provides some comic relief. Were there time and space she would be quite an interesting character to explore.)

Another twist on the domestic novel is the shuffling of narrative perspective. For some of the book we’re more connected to Rolly and some of the sequences where he revises his artwork and attempts to define it are quite engaging. Sloan’s acclaimed work as a photographer seems to assist in the interest of these sequences. Rolly’s work is undercut again and again by Alice’s disregard for its value. Some of this appears in fits of anger, but even in the beginning pages of the book she admits to not understanding it. We’re not sure if we are meant to resent Alice for her harshness or to consider Rolly a buffoon for his self-involved, inconsequential work. Consistently though, we know that the center of the marital problems surrounds Alice’s unflinching and resolute desire for a child and Rolly’s serious devotion to his work and inability to understand Alice’s desire. Also interesting is the way both characters dive into infidelity, Rolly thinking himself in love with an abrasive woman at his school, and Alice choosing a friend she is comfortable not loving. This role reversal is refreshing and again tips the domestic novel on its head.

When finally Rolly’s sabbatical to Norway is imminent, he seems focused on Alice and largely more present than he was in the first part of the novel. Alice becomes distant and removed, the way he was initially. This reversal could be connected to a family trauma and the different ways each character tackles heartbreak. So, even though this was a trip they had planned to take together, Alice feels more comfort in the small town she initially questioned and lamented. She now welcomes the lack of fences. She doesn’t want to abandon this to follow Rolly again:

What about what I might want? Why should I quit my job, leave my friends, my mother? I like it here in the boonies, although you seem to think you’re too good… Why should I tag along with you to the Norwegian tundra? To be your little hausfrau? Forget it.

These characters, who are approaching the new millennium, seem to straddle past and present, what is modern and what is traditional, even archaic. Rolly is opposed to infertility drugs. He makes comparisons to 15th century paintings, and his work in Norway centers around Viking ships. For the most part, Alice represents the modern world and perhaps in some ways the antithesis of the domestic heroine. But her superstitions create an uncertainty about her anti-romantic nature as well as her insistence on letter writing when Rolly goes away. She refuses email. Alice’s foray into the domestic world seems largely about boundaries, creating and redefining her own domestic space, and a way to delay conversations with Rolly about their marriage. Through all of this turmoil, it is never clear what brought the two together in the first place, but maybe it’s better for a book to provide more questions than answers. Ultimately they need one another, but not in the traditional sense and not in the ways a reader would expect. Lynn Sloane’s novel is nothing short of brilliant and she has accomplished much within the quiet confines of a domestic world.

Lynn Sloan is a writer and photographer who grew up as an Air Force brat. She graduated from Northwestern University, earned a master’s degree in photography at The Institute of Design, formerly the New Bauhaus. Her fine art photographs have been exhibited nationally and internationally, and collected by major museums. Her stories have appeared in numerous journals, including American Literary Review, The Literary Review, Nimrod, and Sou’wester. Principles of Navigation is her first novel.

Molly Kugel Merkner’s poems have appeared recently or are forthcoming in CALYX, Boxcar Poetry Review, The McNeese Review, Subtropics, Flyway, and Poetry East. Her chapbook, The Forest of the Suburbs, is forthcoming from Five Oaks Press. She is a Ph.D. candidate at the University of Denver and lives in Colorado with her husband and two children.