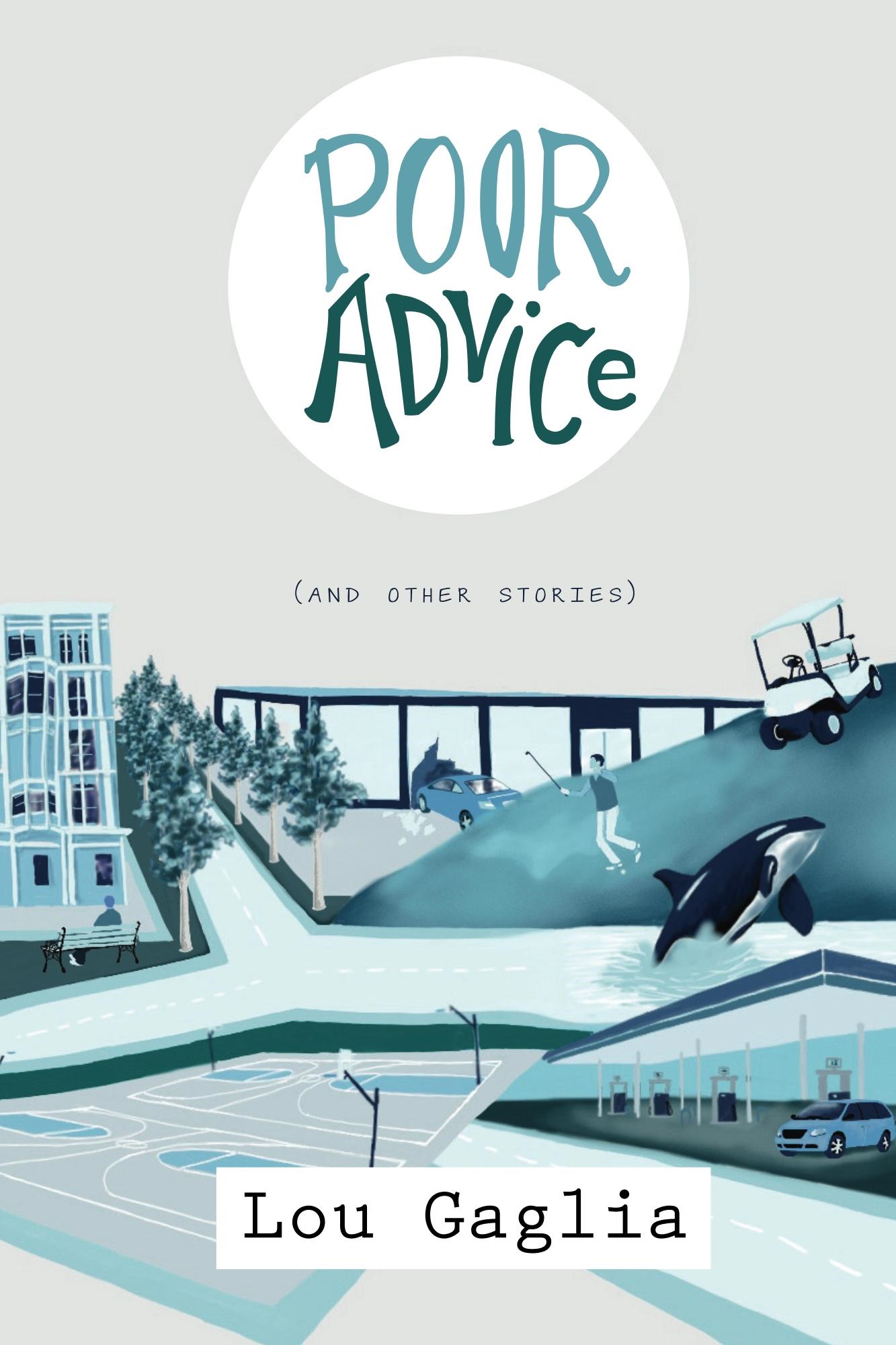 Lou Gaglia’s debut collection Poor Advice opens with epigraphs from Ring Lardner and Aldous Huxley, and in many ways, Gaglia’s gritty and off-kilter stories pay homage to both. However, if we were to play the game of literary family trees—complete with anachronistic couplings and biological impossibilities—Gaglia’s work is more closely the descendant of Raymond Carver and Sam Lipstye, with some of Aimee Bender’s magical DNA mingling with these realist predecessors. The characters in Poor Advice are, to put it plainly, schlubs: sad-sacks who lust after waitresses, who write letters to women who don’t understand them, who are baffled by their own bad luck. But Poor Advice is not a catalog of mundane miseries, nor it is an anti-hero battle cry. Instead, Gaglia asks more from the reader than merely judgement or compassion: these fine-tuned stories, replete with cutting dialogue and daring risks in plot and tone, beg us to consider the underdog as a worthy narrator.

The characters of Poor Advice are often the victims of circumstance or the social misdemeanors of others: a gas station clerk is berated because his store no longer gives out free match books; a man is cheated by his mechanic. In the epistolary story “Correspondence,” a frustrated letter writer tells his confidante, “Life stinks! It stinks so rottenly, so wholly and pathetically that I wish mine would just end without warning or symptoms.” Her response: “I am convinced that art is the only path to a truly meaningful life, and that love itself is the way by which art should be developed to realize fulfillment.” In this and other stories, characters go unnoticed by the people they consider closest. In some cases, as in the stylistically exciting “Hands,” this leads to wry, detached narration; here, the narrator observes a fight as if from above: “One of them was easily defeating the other. I could tell because he had wrestled him to the ground and was punching his head again and again, and the loser’s head was bloody.”

Elsewhere, characters grant power to their loneliness, giving themselves a measure of authority, as in “Squeezing the Boots,” one of the most powerful stories in the collection. If we were playing Raymond Carver bingo, Gaglia would hit all the points here: frustrated suburban father, working class woes, barely restrained outrage at minor but symbolically potent injustices. What distinguishes “Squeezing the Boots” and the collection’s other powerhouse stories is how Gaglia lends his fearlessness and control as a writer to his characters. In ”Squeezing the Boots,” the narrator fumes while reflecting on how he has been cheated in the past, then grasps for optimism: “Stop it,” I said aloud. “Count the people that you love instead, stupid.” Ultimately, the protagonist engineers a modest victory that is magnified by Gaglia’s pitch-perfect rendering: “Home was only a few minutes away, but I drove for a while first, circling town in my boot-leaking steering-rack-cracked car, chuckling every once in a while at having known the answer, for once, before walking into a room.”

Throughout the collection, Gaglia creates characters who are flawed, clumsy in their reckoning with the world, but full of a beautiful and very human hope that they might be able to change their circumstances. These are not characters who resign themselves to quiet desperation; rather, they boldly engage with impossible predicaments. And sometimes, as in “Days of Wine and Pratfalls,” in which a man unwittingly adopts his girlfriend’s slapstick clumsiness and loves her all the more for giving him this unexpected trait, they even find reasons to believe that their hope is justified.

Years ago at a reading, the poet Traci Brimhall signed this reviewer’s copy of her book with a line from one of her poems: “Loneliness is the worst sort of freedom.” It is an unwieldy concept, yet Gaglia’s collection elucidates the freedom that comes from loneliness. Many of Gaglia’s characters are desperately lonely, but their loneliness also grants them the ability to tell their stories unapologetically. They are at once painfully self-aware and reckless in their bravado, making for a nuanced conversation with the reader: these characters may not be the type we go to for good advice, but isn’t there something worth learning from characters who confront ugliness with blind, clumsy hope, relinquishing their pride in the search for grace? The characters of Poor Advice may fumble, but the collection itself triumphs as it deftly slides from the gritty to the surreal, as it holds a mirror to the complex and clumsy machinations of the heart.

Lou Gaglia’s short stories have appeared in Menda City Review, Hawai’i Review, Eclectica, Thrice Fiction Magazine, Forge, and many other publications. His story “Hands”, which appears in Poor Advice, was runner-up for storySouth’s 2013 Million Writers Award. Poor Advice won the 2015 New Apple Literary Award for short story fiction. He teaches in upstate New York and is a long-time T’ai Chi Ch’uan practitioner who still feels like a beginner. Visit him at lougaglia.com.

Catherine Carberry is a writer and editor based in Spain. Her fiction has appeared in Guernica, Tin House’s Open Bar, North American Review, Greensboro Review, and The Collagist, among others. She regularly contributes book reviews and criticism to The Rumpus and The White Review.