People With Holes by Heather Fowler 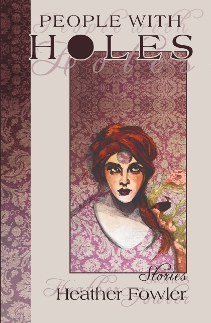 I found you wearing a hole one day.

And while this hole, which straddles both the literal and metaphorical, might veer into cliché, it doesn’t, mostly because of how Fowler deftly plays with tone in a way that simultaneously grounds the story as it floats away into magic.

The narrator’s boyfriend has developed a hole near his elbow; when he invites her to a support group for those similarly afflicted, she’s flippant and dismissive. But when her boyfriend is called on to explain how she caused his hole, he abandons the group, leaving the narrator with her own wound. She’s brought into the embrace of those gathered and rejoices:

I loved these people like I loved a Bob Dylan album! Maybe more. With no big fanfare and no jacked sermon, they pulled on my arms to bring me closer. They swallowed me into their varied folds like I was the hole at their center, the daisy stem of the group, all of them the petals.

This kind of tonal balance permeates many of the stories, just as the feminism at the heart of them wildly beats.

There are girlfriends who cut their boyfriends’ heads off and fractured fairy tales like “Sex with Dwarves,” and a devastating story about a woman who literally strips off her scars and keeps them in a room; all of these incite a feeling of empowerment that ascends to liberation, even if it cannot be fully realized. This kind of liberation is to try to do and see and be, regardless of any gender or societal expectations.

Fowler says in an interview that:

I often tell my students that magical realism is not just placing a magical element within a fictive piece, but can be exploding a humanistic metaphor.
Many of the stories in this collection hinge on, or perhaps utilize, the element of magic to explore the idea of communication.

In “With the Silence of a Deer,” one of the weirder and more compelling stories, a woman’s head turns into a deer’s while she is in the country with her boyfriend. When he returns to the house, he’s aroused and they have aggressive sex. She ends up leaving him and regaining her original form; and while her boyfriend sends a series of increasingly hysterical and funny text messages to try to lure her back and then spew hatred at her, the thing that struck me most about this story was a specific kind of troubling violence. When she has the head of a deer, she cannot speak. She mentions that, before the transformation:

Whatever held her back from saying this to him before, once she’s changed and briefly can only communicate through writing, he won’t let her:

“I can see you’re trying to say something,” he said as he finished. “Your tongue keeps sticking out. It’s so cute! Maybe later I’ll get you the paper again. We can talk.” But when he went to the living room, he got a beer and put his feet up on the recliner.

To literally silence someone like this feels like another kind of violence, and it seems to be the impetus the narrator needed to make her decision to leave.

The magic in these stories is a way of de-familiarizing, of opening up reality, splitting it apart, disturbing it into the light. It is not separate from reality. The magic makes itself known through metaphor; but metaphor is embedded in our reality. Up is a metaphor, down is a metaphor; we speak and think and live in metaphor. The magic of this kind of magical realism is in separating out the metaphor for attention, to explore the magic already within reality.

In Fowler’s worlds, men take from women what they haven’t necessarily given; the women enact successful and failed revenges, they are whole and sometimes mean and sometimes hurt and sometimes win, but they are present and trying on their innate power, recognizing it, in ways that sometimes benefit them and sometimes send them reeling into newly painful places, lit by the new light of transparency and rupture.

These are forcefully told tales. Fowler is a fearless writer. Her characters make decisions that make readers uncomfortable. This must be what it feels like to be liberated.

***I should also note that what initially drew me to Heather Fowler’s People with Holes was that she’s donating
100% of her proceeds from it to Planned Parenthood, and her publisher, Pink Narcissus Press, is matching her donations. This is a marvelous, hugehearted thing to do and I wanted to help make public this gesture. Now, having read this book, I can see that the connections to its explorations of women and the role that the organization plays in encouraging women to take control over their own healthcare and well-being, are present and keen. (There’s also a very funny reference to a “Susan Komen knife” in the story “Ex-Boyfriend’s Head”).

Heather Fowler is the author of the story collections Suspended Heart (Aqueous Books, 2010) and This Time, While We’re Awake (Aqueous Books, forthcoming 2013). Her work has been published in such venues as PANK, Night Train, storyglossia, Surreal South, JMWW, Prick of the Spindle, Short Story America, and others, as well as having been nominated for both the story South Million Writers Award and Sundress Publications Best of the Net. Her poetry and fiction have been nominated for the Pushcart Prize. She is Poetry Editor at Corium Magazine and a Fiction Editor for the international refereed journal, Journal of Post-Colonial Cultures & Societies.