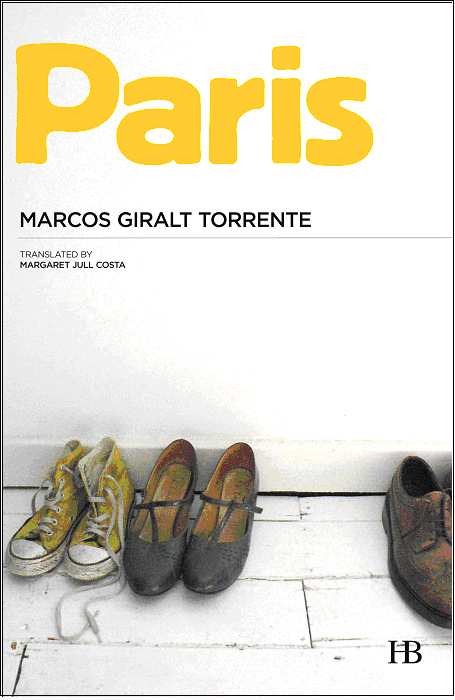 The unnamed narrator of Marcos Giralt Torrente’s novel Paris has grown up painfully aware of the absence of his father. An occasional freelance translator and proofreader, when he wasn’t pursuing some scam or scheme, his father “was the kind of liar who, in order to conceal one lie, tends to make up a bigger one.” One evening in his childhood, as the narrator sleeps, the authorities burst into the family apartment in Madrid and arrest his father. The police are looking for a man with the name the narrator’s father had been using. In a bit of karmic irony, by giving a fake ID—by lying, once more—the narrator’s father gives himself away. If he had stated his real name, his scheme, involving fraudulent loans, might have been successful.

After two years his father gets out of jail, but his return brings no sea change to his relationship with the narrator or his stoic mother. To his father, the narrator, an only child, is “a bothersome presence, a witness he did not wish to have, one who could testify to any neglect or lack of love.” He lives with his wife and child for a time, but continuously disappears for long periods. While the narrator yearns for a more consistent patriarchal presence, he also questions—in what makes up the bulk of the novel—the unique sort of absence created by his mother, who took care of him, virtually alone, his entire life:

The most significant thing about this situation is that it doesn’t appear to affect my mother. There are no arguments, no complaints. She has obviously begun to realize that he [the narrator’s father] frequently lies, and she sees, with some concern, that his life is gradually dissolving into one of constant flight, but she nevertheless still greets every return home with joy…

If the father is a sort of archetypal scoundrel and vagabond, the type who, the narrator says, “only needs to be admired,” his mother is saintly. As the narrator grows up, she is a model of calm: “To listen to my mother,” he says, “you would think she’d never had any problems at all.” Indeed, “[l]ife with her was like a straight line. There were no particularly serious problems, no enigmas that could not be resolved with a look, a few words of consolation, or a discreet silence.”

That straight line, though, has one interruption, a period of a few months when his mother, leaving the narrator in the care of his aunt and uncle, absconds to Paris to teach Spanish. Hence the title of the novel, which hints at how the narrator views these few months—so uncharacteristic of his mother—as a key to unlocking whatever was going on behind her serene facade and thus, perhaps, a key to understanding his existence too (“Paris lies behind it all,” he says at one point). By the time he tells the story, because of his mother’s dementia, the narrator has lost the chance ask her what happened in Paris—whether she met up with his father, as he speculates, whether she underwent “some kind of transformation,” why she barely called to check in on her son—and whether she had really planned, initially, to return to Spain. His mother now lives in a care facility, in a total and complete sort of present, while her son endlessly and anxiously combs over the past.

By now, the original Spanish language Paris is more than a decade old, but is finally appearing in English from Hispabooks thanks to a translation by Margaret Jull Costa, one the sturdiest and most adept English translators of Spanish and Portuguese literature for the last two decades (she has translated Javier Marías and Lídia Jorge, among others). A winner of the Premio Herralde de Novela, Torrente’s debut novel reads like a sort of over-caffeinated and anxious Marías—not necessarily a bad thing, but definitely a style that can, occasionally, try one’s patience with repetitions and loops and exaggerated introspection. The narrator of Paris has grown up to be incredibly neurotic and obsessive; most of the pages are long monologues, Proustian dives into his past, which would not seem to be out of place being read verbatim at a therapist’s office. We do not receive any unbiased glimpses of his mother or his father, only what he can remember—and he openly admits his memory is imperfect and fractured. If the book is thin when it comes to plot, it brims over with psychological acuity. Just when it seems there are no more layers to the onion of memory, Torrente peels off another.

The ultimate twist of Paris is an exceedingly excellent one, which redeems the book’s occasional excesses. That will not be spoiled here, but it should not be surprising that the narrator’s mother was, like her husband, not entirely truthful with her son. Her own lies are, in part, ones of omission, and it causes the narrator, and thus the book itself, to meditate on the forms of deception: “Does real lying have to be deliberate? Are we lying from the moment we choose to conceal something from someone because it seems inopportune or inappropriate?” His mother’s deception, she maintains, was to “protect” her son and “preserve” his love. (The most pernicious lies, Torrente appears to maintain, are told to those we think need them the most.)

Even after discovering the truth, the narrator, many years after, is still under a bit of self-delusion. Or maybe he is finally seeing things more clearly, as he no longer believes his mother, like his father, gave up anything for him: “People don’t sacrifice themselves,” he says. “People usually do what they want to do, what suits them best, what fits their personality or brings the most money. No one sacrifices themselves.” For the patient reader, Paris is a brilliantly complicated novel that slowly and deliberately plumbs uncomfortable territory. Most importantly, it provides us the difficult truths that we want—that we need—literature to provide.

Greg Walklin’s review of Dead Stars by Alvaro Bisama appeared at Necessary Fiction last year. His reviews and essays have appeared at The Millions and Ploughshares, and he is a regular book critic for the Lincoln Journal-Star. His short story “At the Turn” was recently featured in Palooka Magazine, and he has fiction forthcoming in Midwestern Gothic.