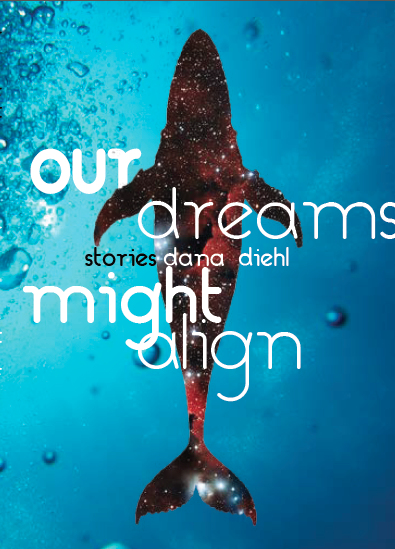 Dana Diehl is a scientist. Her stories run the gamut of scientific inquiry: biology, ecology, zoology, anatomy, astronomy and geology all make cameos in her debut collection, Our Dreams Might Align. Whether through worms or wormholes, Diehl’s characters are experimenting, as is she.

In the opening story, “We Know More,” a couple are both victimized and bolstered by science. While Ashton’s horticulture is thriving, his neurology is scrambled. His girlfriend April teaches ninth-grade Earth and Environment, and can namedrop phylum and explain photosynthesis. She’s also a reformed cryptographer who wrote a diary in code “based only on associations I knew. When I stole a pair of pink pajama shorts from Victoria’s Secret: windmills. When I skipped school, rode the bus to the ocean, and went swimming in my clothes: jellyfish.”

As the two orbit each other and Ashton’s prognosis darkens, April experiences a kind of synesthesia comparable to Ashton’s hallucinations: “I breathe in the smell of the leaves changing colors, chlorophyll drying in the shadows.”

The science in Our Dreams Might Align isn’t always sound, nor is it always welcome. Diehl imagines the trickier sides of how future science could impact human relationships. In “Astronauts,” a wife details the anxieties of having a spaceman for a husband. In “Stones,” a pharmacist at “the CVS on University” bemoans her boyfriend’s obsession with healing crystals. Technology’s slow erosion of human emotion and interaction has been much explored in science fiction (see also: the very real phenomenon of “phubbing”), but Diehl’s humor and lyricism set her apart from the post-apocalyptic pack. They’re just as uncanny, but Diehl’s disasters come tongue-in-cheek.

Take the opening line of “Once He Was a Man”: “My husband wasn’t always a beam of light.”

But, as also happens in so many of the stories in Our Dreams Might Align, what starts with a wry wink ends with a gut punch. Diehl’s stories may roam the stars and delve into the microcosms all around us, but they always land in the human heart.

Diehl manages her journeys with remarkable economy. The stronger works in the collection are the shorter ones, such as the knife-twister “Another Time.” Again, Diehl knows the value of a strong opening hook, writing, “My father made snakes fall in love.”

The science here is herpetology, certainly, but there’s a science to the structure of the story itself. Diehl gives a hypothesis, then explores potential outcomes. The story doesn’t end with definitive results—we don’t know what happens to our narrator or her father (or the snakes)—but we have tangible proof (or something as close to proof as anyone can get) of their love.

“Another Time” is just one of Diehl’s numerous experiments in form. She manipulates the structures of her stories—writing in second person, blurring real and absurd—the way someone in a lab would fine-tune their control groups. When she’s not toying with the telling, Diehl infuses something exotic into her fiction, setting her stories in locales as disparate as the cliffs of rural Scotland or a Circle-K in Arizona.

Though her strength lies in brevity, a few of the book’s shorter stories read like sketches for greater and grander designs. Diehl’s eye for irreverent detail paired with her precision of language help the collection flow despite a few rocks in the way. Though the premise of “To Date a Time Traveler” stretches almost into gimmickry, sentences like these redeem any gag:

Diehl dedicates her book to “the collectors, the pilots, the explorers,” and appropriately so; these stories are full of searchers and seekers, characters longing to form a connection with one another.

In the end, Diehl’s inquiries and analysis further prove the impossible distance between us. As much as we map and classify and attempt to understand one another, we are all alone in ourselves—our lives are ours alone. Such is the hopeful refrain of the title—maybe we can genuinely connect, or at least align, if only in our dreams.

As the nameless brothers in “Swallowed” say, addressing their captor, the whale who swallowed them: “We hear your loneliness. We have it too.”

Dana Diehl is a graduate of the Susquehanna University Writers Institute and earned her MFA in Fiction at Arizona State University. Her stories have appeared in North American Review, Passages North, Booth, and elsewhere. She lives in the Sonoran Desert of Arizona.

Rachel Richardson is a writer from Tulsa, Oklahoma, who now lives in the upstate of South Carolina. Her fiction has appeared in Fairy Tale Review, monkeybicyle, and Tupelo Quarterly, and her nonfiction has appeared at The Rumpus, Passages North, and XOJane. She lives online at www.rachel-richardson.com and on twitter @pintojamesbean.