Our Colony Beyond The City Of Ruins by Janalyn Guo 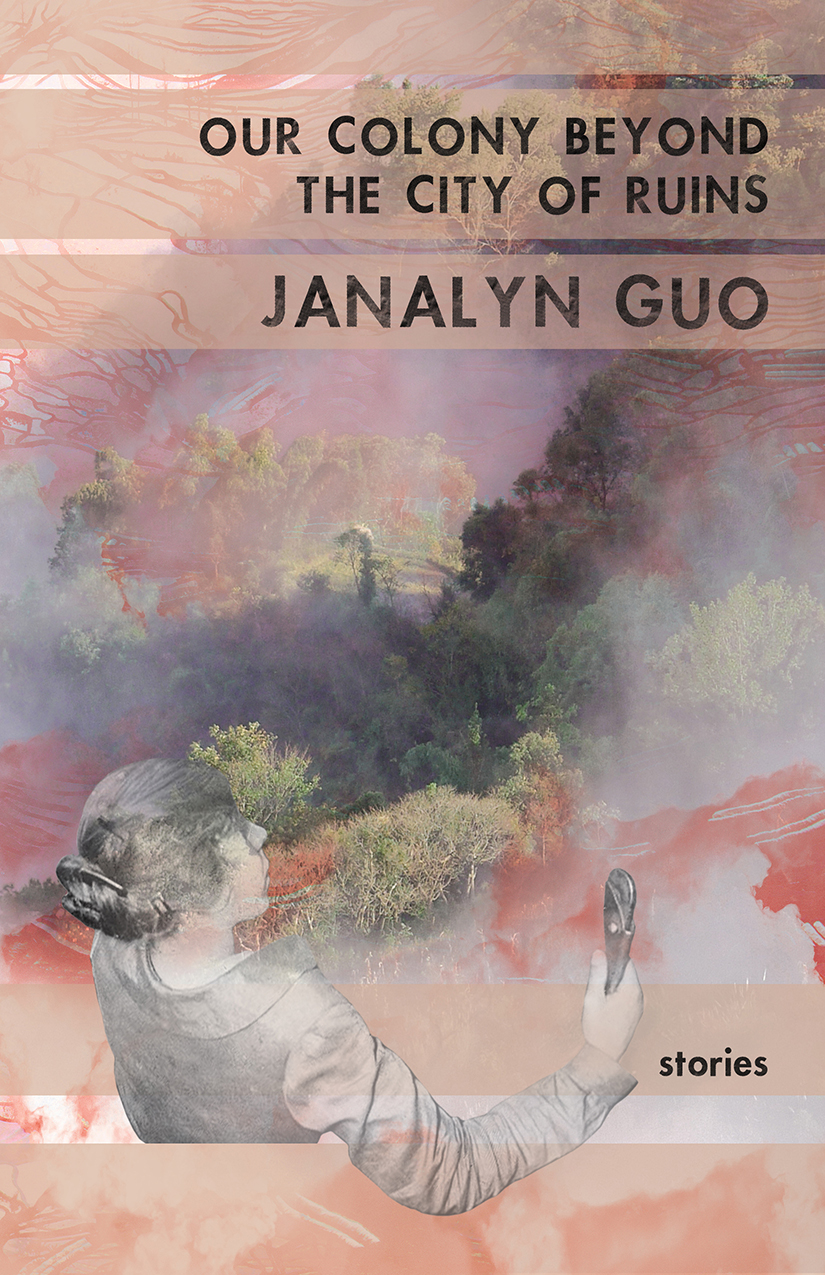 Our Colony Beyond the City of Ruins, the debut collection from Janalyn Guo, presents twelve pieces of fabulist fiction bursting with splendid and unsettling transformations. United by Guo’s lyrical and meditative prose, these stories take readers from China to Paris to worlds not yet known, investigating what remains in the aftermaths of our most intimate tragedies.

The book opens with “Bloom,” in which an unnamed twenty-five-year-old woman, following her “year of bad luck,” decides to visit her aunt in China. There she encounters the “men in bloom,” a group of her aunt’s gua sha customers who grow miniature forests on their backs. It’s a solid introduction to a collection intent on dissolving the borders between human and nature, animal and plant; here, as in many of her stories, Guo channels rich imagery into a reflection on intimacy, permanence, and illusion:

The thing about men in bloom is that once you begin to love them, they become a horizon. A bamboo forest. An orchard of fruit trees. A beautiful still pond, full of lilies and their glowing blossoms. In their new bodies, they live forever, but they aren’t yours.

This current of longing runs throughout the remaining stories. Our Colony is a collection filled with absence: vanished parents, lost lovers, abandoned homes. The protagonists are haunted by that which lurks just beyond their reach. In “Cazenave,” a young woman reflects on a relationship that succumbs to nothing more, and nothing less, than “the unbearable pressure of time.” In “Acting Lessons,” a girl dons a variety of mystical disguises to connect with her estranged father. In “The Sea Captain’s Ghost,” the titular character materializes too early — his bodily counterpart still lives — and passes his time among the Sea Captain’s family, wondering how he might fit with these people who are almost, but not quite, his own. While the endings of Guo’s stories rarely give her protagonists what they desire, the stories themselves are not gloomy. There remains a persistent hope embedded within the collection’s surreal logic: In these worlds of ghosts and spirits, what is vanished may never be truly gone.

Guo’s fabulism resists easy metaphor. Myth and magic are not convenient stand-ins for recognizable issues plucked from a recognizable world. This means a deeply personal surrealism that reads like an extension of character. This means lively, shape-shifting stories where strangeness perpetually morphs into new strangeness. In “Heart Site,” the teenaged narrator spends a week in the company of Elsinore, the quirky keeper of the town’s burial grounds. In a space-conserving effort, the land houses only the hearts of the dead. Elsinore soon discloses that one of these buried organs is swelling: “It was as if the aorta had just grown out from the heart, breaking the soil, expanding outward toward the sun, like a plant.” This development is interesting in and of itself, but Guo doesn’t stop there: The swollen heart turns out to birth mysterious crones who travel about in ball-like packs, briefly kidnapping townspeople and granting them a single wish. The stolen people return as more beautiful and talented versions of themselves:

It was as if they’d stepped into and out of a cold lake, their entire circulatory system reignited. They spoke about their experiences of being taken into a particular lair decorated in their own detritus — strands of hair, fingernails, baby teeth, photographs, credit cards, food wrappers — and then being granted a wish. They each stared into the milky eye of the one crone that chose them as they explained how they wanted to be transformed.

The arrival of the crones is the sort of twist even the most astute reader would never see coming, yet miraculously, the narrative never feel jarring. The imaginative landscape of the collection is really just that big.

It helps, too, that Guo’s characters never pause to question their circumstances — how, for example, a woman might have come to be frozen inside a vending machine at the local Walmart, or why a community displaced by earthquake would choose to live submerged in the waters of a natural spring. Just as the characters come to accept the unpredictable fluctuations of their worlds, so readers will adapt to the shifting sands of the collection and realize that to read for answers is to do these stories a great disservice. Instead, we must allow ourselves to be transported. We must become like the townspeople borne away by their crones, or like the levitators of “Night Floats,” who take to the sky and discover the wide spectrum of human possibility: “As we hovered high up in the air, where we had no boundaries, we dreamed up new lives for ourselves.”

Janalyn Guo was born in China and grew up in the United States. Her fiction has appeared in Denver Quarterly, Black Sun Lit, The Collagist, Bat City Review, and elsewhere. Our Colony Beyond The City Of Ruins is her first book.

Tessa Yang (@ThePtessadactyl) has fiction published or forthcoming in Hayden’s Ferry Review, Cream City Review, Joyland, and elsewhere, and book reviews published with The Masters Review and Indiana Review. She teaches creative writing at Earlham College in Richmond, Indiana, where she is at work on a novel. Find her online: www.tessayang.com.