Only Fools Die of Heartbreak by Thor Garcia 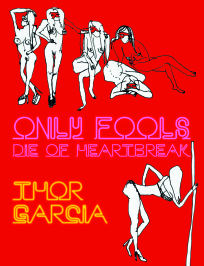 If Thor Garcia’s Only Fools Die of Heartbreak, his latest short fiction collection, had somehow been published in the 19th Century, it would have given Charles Darwin’s Origin of Species and Mark Twain’s Huckleberry Finn a run for their money as the most controversial and banned book in the nation. Even as recently as the 1960’s, the book would have undoubtedly joined D. H. Lawrence’s Lady Chatterley’s Lover as one of the pornographic tomes that brought about the passing of obscenity laws in many countries. Luckily for readers, Garcia is alive and writing today, and his prose takes full advantage of the everything-goes nature of indie publishing.

Only Fools Die of Heartbreak kicks off with the first part of The Apocalypse of St. Cleo. The six-part novella follows Cleo Blump, a young woman from a poor family who is beaten and raped from an early age and eventually becomes the leader of the Blond Revolution. Each portion of the tale both complements and competes with the previous one, almost as if Garcia was trying to see if he could come up with stranger situations, weirder names, and more outlandish sexual antics. From the beginning, the narrative resembles what a sexploitation dramedy teeming with drunken pirates might be like:

“Here, here,” said one sympathetic woman, Yahnice, coming forward to comfort Cleo. “Tis no crime to suckle the odd spare cock and testicle in the interests of the family economy, my sweet darling. ‘Tis the way of the world nowaday, for food, yes. Verily, it is done the world over, ‘tis the way of the species…”

The Apocalypse of St. Cleo would be a great novella even if published alone. Constantly dancing between misery and mirth, the fragmented account of Cleo’s life is a strange tale because it’s simultaneously depressive, hypersexual, and very funny. The writing, which seems to have been created to defy time and geographical space, is also so varied that it brings to mind a wide range of literary and film genres that go from comedy to exploitation and from pirate movies to drama.

If the first story left any doubts about it, the second tale, “San Diego Weekend,” quickly establishes the elements that will fuel the entire collection:

At some point in the 1980s, I got mixed up in a drinking, drugs and sex racket down around the San Diego area.

Besides helping readers understand that sex, drugs, and booze will permeate the collection, “San Diego Weekend” also demonstrates that Garcia can radically switch his approach, voice, and styles from one story to the next. From the humor and raunchiness to the informative footnotes and great dialog, Garcia’s writing is a hyperkinetic animal that constantly moves forward at a frenetic pace and without the burden of filters.

One of the standouts in Only Fools Die of Heartbreak is “The Day Michael Jackson Died.” It tells the story of the relationship between a recently divorced unnamed American man living in Europe and Liliya, a Ukranian woman who responded to his ad on a dating site. While the narrative recounts how they met, offers glimpses of their high and low points, and deals with the man running into a very harsh and violent criminal on the day Michael Jackson died, the story shines because it embodies the dychotomous character of Garcia’s prose. On one hand, the memory of a pornographic video seen on the internet repeatedly intrudes into the narration, and its vivid description is as dirty as it gets:

The girl bent down on all fours. The penis entering and exiting her butthole. The guy removing his penis, putting it in the mouth of the second girl.

So while these sexual antics are enough to consider “The Day Michael Jackson Died” obscene, the author balances this out with a sharp critique of American culture. The nameless protagonist treats his Americanism like “a small, annoying dog” that he’s somewhat ashamed of and bothered by but not ready to get rid of just yet. This feeling comes from what he considers the average “meatheaded and preposterous” American mindset:

The balance, however, is shaky at times due to the repetition of the pornographic passages. While the first two times the recollection appears can be easily explained away as a smart critique of the violence, crudeness, and objectification that defines most contemporary pornography and its effect on the male psyche, having the same scene, which is much longer than the few lines quoted above, appear four times in such a short narrative forces the reader to question Garcia’s intentions. While a single appearance would have clearly fallen in line with the author’s obvious and relentless critical discourse, the reappearance of the sex scene, along with a few of the passages in the other stories (The Apocalypse of St. Cleo and “The Ballad of Yeltsin Rape Abortion” being prime examples with their rapes and almost scatological nature), place Garcia’s work dangerously close to the realm of for-shock literature, and that is never a good thing when trying to push forward an intelligent critique.

Besides the sex, the lack of strong female characters also hurts this collection. Garcia is clear and very direct in his denunciation of the major flaws in mainstream American culture, but the majority of his characters are white males. While this is a sharp collection that clearly showcases its author’s intellect, suggesting the absence of stronger female or non-white characters is some sort of meta-criticism is ludicrous.

Between the six parts of The Apocalypse of St. Cleo and the ten stand-alone tales, Only Fools Die of Heartbreak comes in at 338 pages. However, it feels like a shorter read because the descriptions flow easily and the dialogue is never bogged down. Despite the fast-moving prose and superb mix of comedy and vulgarity, what makes this collection worth a read is the fact that Garcia’s wit and scathing social commentary shine even when covered by a thick layer of alcohol, broken individuals, late night drama, and X-rated sex. The stories here beg to be read because they are collages of great genres: they contain enough weirdness to be considered bizarro fiction, enough illegal actions to be called crime, and enough lewd behavior to ensure the absolute indignation of prudish readers everywhere.

Thor Garcia was born in Long Beach, California. He has worked as a journalist in Los Angeles, San Francisco, New York City and Prague, Czech Republic. His books include the novel The News Clown (Equus Press, 2012) and the story collection TUND (Litteraria Pragensia, 2011).

Gabino Iglesias is a music, art and literature critic. He is the author of Gutmouth from Eraserhead Press, 2012.