One by Blake Butler and Vanessa Place 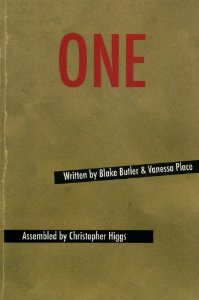 Written by Blake Butler and Vanessa Place, then separately edited and stitched together by Christopher Higgs,One is an experiment and a hybridized novel that can be extremely difficult to grasp, pushing the boundaries of what defines fiction. One is multiple stories combined into a single work that rips apart the dialectical debates of subconscious versus consciousness and external versus internal and attempts to lay bare the outpouring of thought that bombards our daily lives. To call it experimental would be to take away its visceral charm, its lyrical violence exploding on the page.

I read it three times. That first cold reading was as confusing as watching ten chess matches without any idea of the rules. You recognize something brilliant is happening, but you have to know the parameters to fully appreciate it. But even along that initial foray, there was an undeniable genius in lines like these:

Trial by ordeal had always been viewed with skepticism and condescension by Latin lawyers and intelligentsia. My blood does bubbles that have sounds about them, like someone talking who is deaf, and cannot hear. Often, there is a landscape. If it is populated, it becomes something else. The crack of my lips makes flakes upon the living room that settles on the blood as ships, and therein flows down from me in the current, a flow out from one ocean to the next.

Constraints and laws helped bring order to the pandemonium of One. In the introduction, Higgs describes some of the basic rules he set to help root the book:

3) Compose ~40-60 pages. Avoid discussing the details with one another.

4) I’ll suggest that you think in terms of three movements: Discover-Secrecy-Escape. These need not be sequential.

Blake Butler would write on the “internal landscape of the character,” whereas Vanessa Place would focus on the “external.” Furthermore, Higgs explains: “So we three are its creator, from the house within the dream house, the helmet shackling us to memories of our father.”

Even with those in place, One is a difficult book to navigate. The thematic movements are directional arrows in a prose hurricane exploding with poetic violence. Nothing is sacred, sentences melt, words rebel against the page, and the narration is tumultuous. Words rhyme, then ring in dissonance, there’s two pages of laughter (literally ah ah ah ah ah ah for two pages), there’s a double, there’s blood, there’s shit and a protein tower “throttling the sky.” I found myself wondering how Higgs assembled the two disparate pieces into one, creating a completely different form in the process. Did the segmentation and the ensuing fusion reflect the original intent of Butler and Place, or was this a completely new construction, judgment in the form of selection? It’s hard to pinpoint in a review when every section defies categorization and causality is cast aside like a superfluous codex:

Me, my body is a vassal, forgive the consonant. Though I don’t mind, of course, and isn’t that your cause and effect, neat as a halo. But honestly, the past is simple, reduction in the death works. In this manner, god, if there was one god, and not the twenty-odd, could be considered composed of coupons, percentages taken off the price so long as you can afford the paper. It’s a peaceful process of self-fulfillment. Rather, it’s a peaceful process of self-debasement.

Reading One is a struggle in the best sense of the word. This is literature that challenges readers in ways that few books do, both demanding multiple readings and indifferent to readers who choose not to do so. Usually, after finishing a book, I’ll have an idea of my first impression. In this case, I found most of my thoughts inadequate to express the hemorrhage of ideas contained within. While you can read from beginning to end, you can also read in any other direction. It’s remarkable that Chris Higgs, as editor, didn’t add a single word to the text as the experiment could have easily fallen apart. Seemingly random thoughts segue into one another. Secrecy swallows up discovery and escape and then goes in reverse, physicality, such as fluids, providing parables for our brittle existence and providing chains to link the Utterances together:

Drink up the milk all muddled in me. I taste like Diet Coke and pills. Fuck. My helmet hurts around the hole for where my mouth is and buzzing hard around my tongue, the sensors in my ass squeaking for what I know I should not eat, fuck, for all the hours and the tables and the food I will be fed by will alone because I am, all other food removed in light of days here and the begging of the fly, the husk of gift of Senate removing need today, today, giving unto us the unburden of no decision, which I herein know I will not, and so much now, violate. I drink the fuck out of me. I really slurp it.

While the description, ‘exquisite corpse,’ might be an apt one, this is anything but a dead amalgamation reeking of whimsical caprice. There’s a focus wielded by Higgs as though a funeral were at hand. RIP traditional fiction, reborn, or at least given new offspring. This is a different type of interactive fiction where every sentence is a story, the subject as writer, the subject as reader wrestling with said writer’s words. Paragraphs hammer their way in and there is a description of a lever on a plow that goes both ways, switched up for pleasure. Pleasure is palpable and permeable in the prose patterns that worm their way into our minds, a continuous flow of thoughts similar to a recording of brain waves on print. “THERE IS NO US,” is declared about halfway through the book, a resounding reminder of the individualistic slavery of a reader pinned to a book. In this case, there is only One.

Blake Butler is the author of Nothing, and several other works. He lives in Atlanta

Vanessa Place writes poetry, prose and art criticism; she is also a criminal lawyer and co-director of Les Figues Press.

Christopher Higgs wrote The Complete Works of Marvin K. Mooney, a novel. He is also a literary critic, independent curator and educator.

Peter Tieryas (Liu) has stories published or forthcoming in the Bitter Oleander, Camera Obscura Journal, decomP, the Evergreen Review, and the Indiana Review. He is also author of Watering Heaven, stories (Signal 8 Press, 2012).
Share This