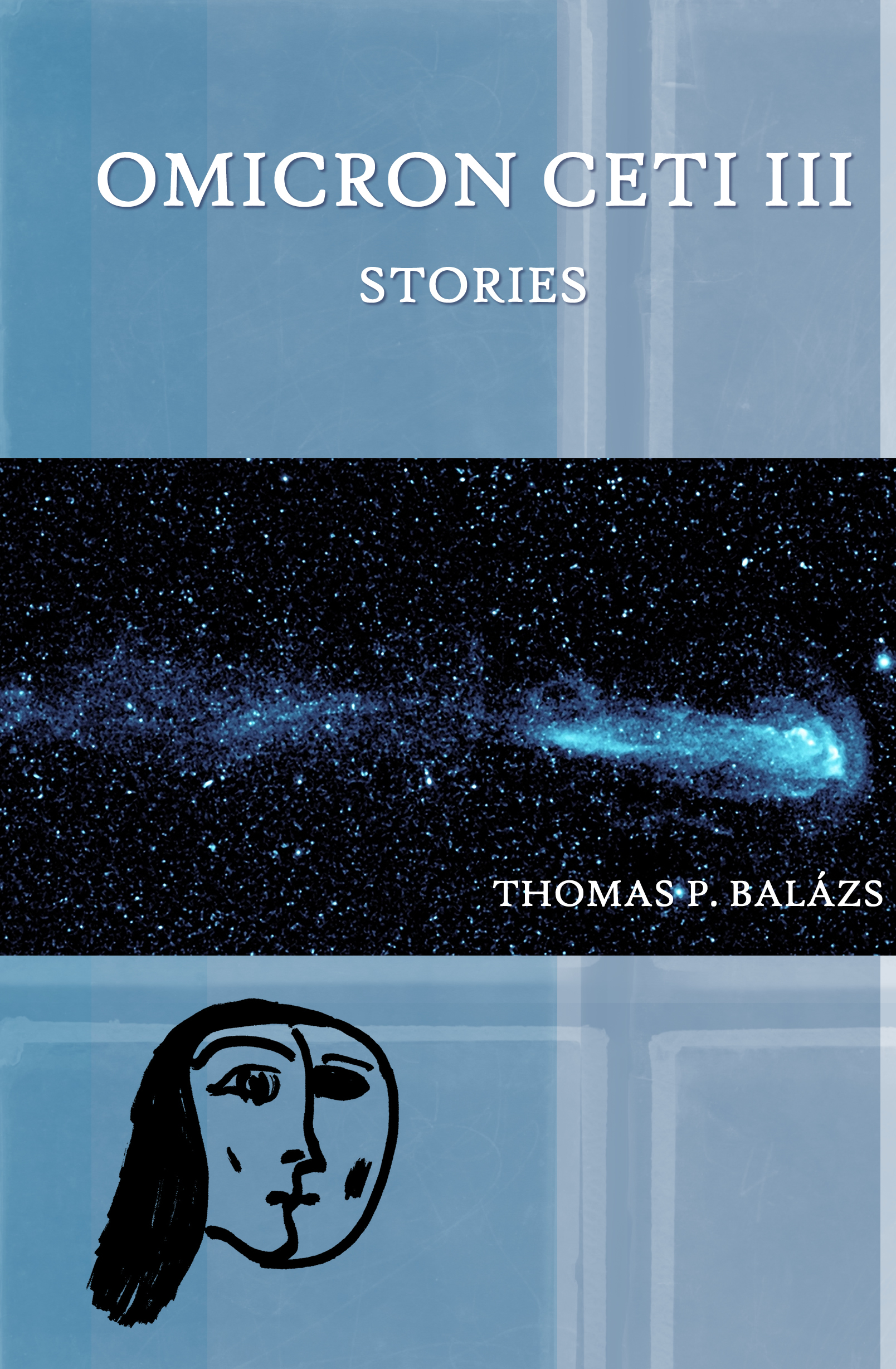 The title of Thomas P. Balázs’s nine-story collection, Omicron Ceti III, invites the reader to think about the book in terms of an original Star Trek episode entitled “This Side of Paradise.” Like most of those original Star Trek stories, “This Side of Paradise” is a classic query-story with a moral, asking viewers to think about what exactly makes us human, compared to other life forms, both possible and imagined, and what are our limits.

The story: The USS Enterprise visits the planet Omicron Ceti III, thinking that earlier colonists have all disappeared because of certain atmospheric rays, only to find the colony alive and thriving. The reason for the colonists’ physical and mental success is that they are continually exposed to spores from a certain plant, spores which induce happiness and euphoria (as well as provide atmospheric protection). As usually happens in Star Trek, several members of the crew are exposed, fall under the plant’s spell and want to join the colony. Obviously, things quickly get out of hand until Captain Kirk saves the day.

This particular episode also involves Spock falling in love with one of the colonists, a woman he had previously met on earth and tried to love, but of course, being Spock, couldn’t manage it. With the help of the “happy” spores, Spock engages his emotional side and experiences true, unbridled happiness. Until Kirk gets him off the drug and he returns to his square, logical, unemotional self.

But the question the episode poses is about the nature of paradise, and what perfect happiness does to an individual and to society. The crew of The Enterprise, and, with some help, the colonists, decide that perfect happiness is a dangerous falsehood and ultimately refuse their perfect world. Mixed up in that final decision is the process of resignation that Spock must go through in order to leave the colony, in order to leave behind the only chance of real happiness he has ever known.

Spock’s final goodbye is, “I am what I am, Leila. And if there are self-made purgatories, then we all have to live in them. Mine can be no worse than someone else’s.”

Now back to Balázs. Omicron Ceti III is broken into three parts, of three stories each. Headed up with quotes from the episode, each set of three represent one of the moments of Spock’s and the others’ paradise experience, moments which could be described as: potential, fall and resignation.

In the simplest sense, the first three stories are coming-of-age stories—a Jewish preteen experiences her first period, a young man must come to terms with his homosexuality, another young man grapples with serious depression. Three different first-person voices, three different crises, yet Balázs unifies these stories by lacing each with a feeling of expectation. These are difficult moments in the lives of each protagonist, defining moments—in each experience resides a directional choice for the narrator, and Balázs is clever enough to only give the reader hints, not answers.

The collection’s title story comes out of this section and it is certainly one of Balázs’s finest pieces. It also contains a condensed expression of the entire collection’s overall feeling and project. In this story, narrator Erik is in treatment for depression at Westchester Hospital. In the same ward is Rosie, also depressed, but unlike Erik’s other girlfriends and his father and his therapists, Rosie isn’t interested in fixing Erik. She appears to love him—depression, emotional block, cynicism and all.

Three theories for why I am the way I am:

1. Freudian: My mother died in a car crash when I was fourteen, just as I was emerging from sexual latency, overwhelming me with Oedipal guilt and cutting off access to the libido, leading to a general lack of affect punctuated by occasional eruptions from the unconscious.

2. Jungian: My father’s emotional abandonment of me following the accident left me with a gaping “father wound,” hemorrhaging vitality and preventing me from mourning the loss of both parents.

In “Omicron Ceti III,” Erik is a wry and defeated narrator who uses dark humor to put distance between his story and his feelings. On the whole, Erik’s humor is representative of the dry wit that ripples through the entire collection. Balázs manages to infuse these nine stories with a wonderful comedy—dry and dark, yes, but of a relatively gentle variety.

The next triptych of stories moves forward experientially. These are older narrators who have moved beyond their own coming-of-age moments just enough to be confronted with the first of their adult trials. The most powerful story of this trio is “April Paris” about a grad student’s leave-of-absence from his academic program. Tom leaves Chicago, sheds his eccentric, out-dated mode of living (and thinking) and exchanges it for a room without a door in an overcrowded loft in New York, starts dating a former prostitute and current peep show worker with a drug problem and begins to see a version of the real world. What seems at first exciting and revelatory soon reveals its more dangerous edge.

Finally, the last three stories in the collection round out the “This Side of Paradise” idea by touching on the feeling of resignation in Spock’s ultimate decision. As the crew of The Enterprise discover, and as Balázs suggests, humans don’t do paradise very well. We’re either undeserving or we’ve got our idea of paradise all wrong. After all, we are flawed creatures. This message is potentially quite heavy, but Balázs’s careful humor keeps the tone light. Especially in “The Gourmand,” a story about a man with exotic tastes who pushes his fetish to an extreme in the hopes of finding his own special flavor of personal paradise. The story is both frightening and drop-dead funny, as Balázs knows exactly when to camp up his narrator’s woeful quest.

Now, it should be clear by now that despite the science fiction tease of the title of Omicron Ceti III, these stories are terrestrial, all-too-human and anchored in our contemporary reality. Time and time again, Balázs returns to this notion of “self-made purgatories” and what it means to be the architects of our own sorrow. Thankfully, Balázs isn’t out to condemn anyone. In the same way that glimpsing a potential happiness leaves a trace of real humanity in Spock, so do Balázs’s characters find themselves transformed through their experience. Happiness isn’t easy, and sometimes it is even impossible, but the contemplation of happiness—even, perhaps, the simple chance to imagine it—is certainly part of what makes us human.

Thomas P. Balázs teaches creative writing, Western Humanities, and literature at The University of Tennessee-Chattanooga. His fiction has appeared in numerous journals, including The North American Review, Soundings East, and The Southern Humanities Review. His work has also appeared in The Vermont College 25 Anniversary Fiction Anthology and Robert Olen Butler Prize Anthology 2004. Recipient of the Theodore Christian Hoepfner Award for best short fiction 2010, his stories have been nominated for the Pushcart Prize, Best New American Voices, and the AWP Intro Journals Project Award.

Michelle Bailat-Jones is a writer and translator living in Switzerland. Her fiction, translations and reviews have appeared or are forthcoming in various journals, including Ascent, The Kenyon Review, Xenith, Hayden’s Ferry Review, Atticus Review, Necessary Fiction, The Quarterly Conversation, Cerise Press and Fogged Clarity. She is the Reviews Editor here at Necessary Fiction.