Of Darkness by Josefine Klougart 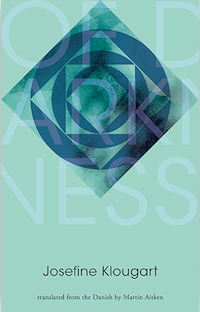 Josefine Klougart is a young Danish author (born in 1985) whose work is highly regarded in Scandinavia. Her style privileges images and language over narrative, and her work has been compared to that of Virginia Woolf and Marguerite Duras. Readers who are interested in plot- or character-driven narrative will not find either in Klougart’s work. What they will find is writing by an author who rigorously pursues the intention expressed by the narrator of her third novel, One of Us Is Sleeping (her only novel previously translated into English, also translated by Martin Aitken): “A wish to see the world as it is, here and now. Perhaps most of all to muster the courage to desist from creating narratives.”

What could “to desist from creating narratives” possibly mean, and what kind of work would result? Some readers will certainly find the results frustrating. In Of Darkness, Klougart’s fourth novel, first published in Denmark in 2013, we sense a story of life and death, love and loss, as we read about characters who are denied the embodiment of a name on the page, and about events and emotions that seem to repeat themselves, or perhaps just unfold slowly over time. We may feel uneasy at reading (and feeling) emotions while knowing little about the incidents that have provoked them.

Klougart is one of those authors whose work readers have to not only read but also study, figuring out the questions to ask. What is the meaning of a pronoun, a he, she, I, or we, without a name to feel attached to? (On the first page of the book, Klougart brings up this issue explicitly, referring to “The way I have always been she, and you have always been he.” [3]) What is the effect of a series of sentences that deny us the formal satisfactions of an indention, gathering into paragraphs, or the white space of a paragraph break? What is missing from a section titled “Sapphic Fragments”? Why are questions not permitted to end in question marks?

Is it possible to reflect and be happy at the same time. (210)

What is left of traditional narrative — and what can be said of its traditional drivers, love and desire — when the narrator desists, comes to a standstill, and refuses to go forward? The root of the word narrative is the Latin word for knowing; Klougart’s narrative refusals can be understood as different ways to approach a state of knowing. In her question mark-less questions, there’s a kind of obstinacy, an insistence on doing it this way, and an admirable pursuit of achieving an interior state of mind on the page. It’s as if she is unwilling to accept the ease of communication via the convention of punctuation; communication must come through the words. This is writing that can’t be skimmed; it has to be read and voiced.

Of Darkness contains passages in many diverse modes, including images, aphorisms, and even drama (one part comprises scenes and dialogue in play form). The diversity extends to the form of the book itself; where you would expect pages labeled part 1 or 2 or 3, there are full-page images that resemble blurred photos or pencil drawings of fabric, suggestive of the crumples and folds of bedsheets or curtains. Klougart’s images are precisely composed (“the leaves, minuscule mirrors of green throwing back the light” [286]), and her aphorisms make you want to copy them down (“The body is the corset that keeps the thoughts in place…”) (121). The patterns in the text include alternations of the general and the specific, immediacy and distance, observer and image. The phrasing of “Plains and skin. Coasts, cuticles” (4) expresses the zooming in and out of an emotional Google Earth. Klougart repeatedly takes you in close, then pulls you back. It’s a cinematic style, reminiscent of Kelly Reichardt’s film Meek’s Cutoff, in which the low-volume dialogue of faraway speakers is intentionally difficult to hear, and the expansive landscapes of the American West are obscured by the bonnets worn by the female characters.

About halfway through Of Darkness, one page is devoted to the following text, a replication of museum wall text (147):

At first, this seems like a surprising intrusion. The blank page is like the white wall of a gallery. The text is comprehensible — not a fragment, not an impressionistic description — and yet it’s incomplete without the work of art it describes. Klougart is pointing outside the boundaries of her novel to another work of art, one that happens to be made of mirrored glass bottles in a mirrored display case. It’s a work about forms and reflections. The idea of reflection, readers may remember, is part of the opening image of this novel, a scene of ashes being scattered at sea: “One can no longer see the sky reflected in the sea; the sky, mirrored no more…” (7) Readers may also be reminded of another intrusion, a short paragraph that also points outside the novel, not to art but to geology:

How do you read a novel that desists from creating a narrative? E. M. Forster, in Aspects of the Novel, famously stated,

In Klougart’s work, there is no king or queen, there is only he and she, you and I. Yet the death and the grief are perceptible. Forster says also that “a plot demands intelligence and memory” of the reader in order for the novel to be understood. What the reader remembers in Of Darkness are the numerous precise repetitions and echoes in its language, such as those odd, static passages that focus our attention on the language of description of geological phenomena or a work of art. Klougart asks the reader to remember these details. In this way, she succeeds in producing a story that depends not on traditional narrative techniques but on the deposition of language and on building a relationship with readers, trusting their capacity for memory and empathy.

Josefine Klougart is considered one of the major voices of contemporary Scandinavian literature, hailed as “one of the most important writers, not just of her generation, but of her time.” Klougart’s debut novel, Rise and Fall, and her third novel, One of Us Is Sleeping, both received Nordic Council Literature Prize nominations, making her the first Danish author ever to have two of her first three books nominated for Scandinavia’s most prestigious award.

Martin Aitken is an award-winning translator of Danish literature. His work includes novels by such authors such as Peter Hoeg, Helle Helle, Pia Juul, and Kim Leine, and he has been awarded the American-Scandinavian Foundation’s Nadia Christensen Translation Prize, and was longlisted for both the Independent Foreign Fiction Prize and the IMPAC Dublin Literary Award.

Erica Soon Olsen lives in Cortez, Colorado. She is the author of Recapture & Other Stories, a collection of short fiction about the once and future West.