Now We Will Be Happy by Amina Gautier 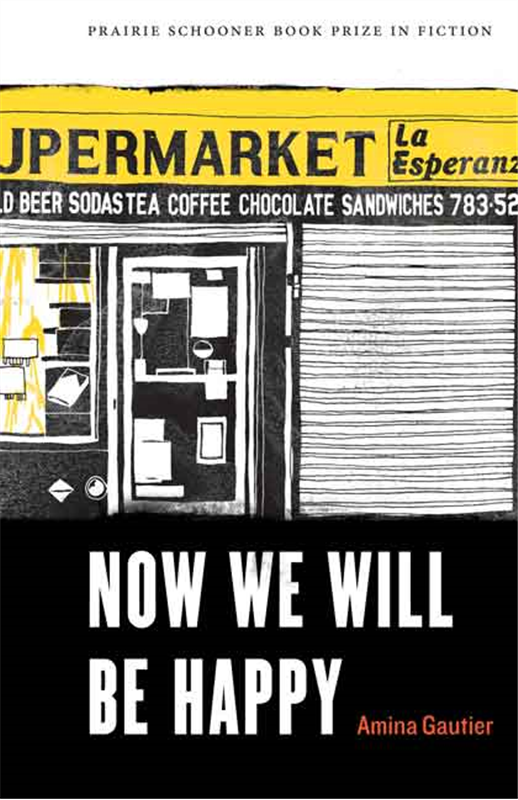 Rushing back to Brooklyn to see her sick abuela, the young narrator of “How to Make Flan” wants to find a way to connect with her grandmother one last time. She wants more than anything else, however, to understand who her grandmother is. It’s not an existential question. “My hair is from Spain and my face is from Africa,” her grandmother says. “And you nieta, you look just like me.” Nevertheless, the girl wants to know, “Abuela, what am I?” The answer is not an easy one, and trying to understand the multiplicity of cultural factors that mark Afro-Puerto Rican life is at the heart of Amina Gautier’s Prairie Schooner Prize-winning story collection, Now We Will Be Happy.

The opening story, “Aguanile,” reveals the broken dynamics of an Afro-Puerto Rican family split between San Juan and Brooklyn. Narrated by the aggrieved granddaughter, we learn how her side of the family had been abandoned to a bitter poverty by the grandfather — a figure of resentment and mystery — who returned to Puerto Rico to begin a new life and start a new family. Abandonment is the central narrative of the granddaughter’s life, an absence and an impoverishment against which she learns to judge every future relationship.

The story begins with the 12-year old narrator being sent to spend the summer with her grandfather in San Juan. She is a kind of peace offering. A gesture partly made to see what will come of it and partly as a way to show the girl something of the world they’ve left behind, but which still informs their lives in ways both small and large.

The grandfather regards himself as an aficionado of Salsa music. His knowledge of the performers and their songs is encyclopedic. Like any aficionado, the knowledge itself is its own pleasure. However, there is always a second pleasure to be had — the pleasure of sharing it with another. None of his children have any interest in Salsa. But now here is this granddaughter come from Brooklyn. As an introduction to the music, he takes her to see the Salsa legend, Héctor Lavoe.

For the granddaughter the concert is a disappointment. The crowd is sparse. The taste of the flavored ice quickly fades. Lavoe is late appearing on stage, and she cannot understand her grandfather’s excitement and patient devotion. When she complains, the grandfather tries to explain the need for understanding when it comes to Lavoe:

“We have to forgive him, nena. He carries ghosts with him. Demons. He’s a tormented man.”
“Can’t he get rid of them?” I asked.
“Nobody can escape them. You just have to stay out of their reach for as long as you can.” My grandfather looked down at me then, catching sight of my fear. “Don’t worry, nena,” he said. “Just do like Hector.”
“What’s that?”
“Give them one hell of a chase.”

The exchange is powerful on many levels, but most of all as insight into the grandfather’s deep connection to Puerto Rico, embodied in the music of artists like Lavoe. They are men who understand. And while the granddaughter does not immediately get it, a seed is planted.

On her last night in Puerto Rico, he plays Lavoe’s “Aguanile” for her. Anyone who listens to a recording of Lavoe’s rendition will register the pain in his voice, a lament that enters the bones. It is here, in writing about music, that Gautier’s language truly shines. The granddaughter, as she grows into a young woman, realizes that knowing this music is a way to keep open a door that threatens to close at any moment — from either side of the cultural divide.

The title story, “Now We Will Be Happy,” also features an Afro-Puerto Rican protagonist largely ignorant of her family’s heritage. Rosa knows no Spanish, has never visited Puerto Rico, has no memories to connect her to this place that figures so intimately in her family’s lives. Nevertheless, as the story opens, this is not Rosa’s main concern. Rosa’s new husband, Pedro, regularly beats her — so regularly, in fact, that Rosa has become a kind of expert in the consequences of pain: this will surely bruise, that possibly not. She wants to leave her husband but feels she has no place to go. Her father is ill with kidney disease, and her parents’ lives are now completely focused on his treatment. She could not imagine returning to live with them again, could not bear the shame and worry she’d bring home with her.

To complicate Rosa’s life further, she has taken a lover. Yauba is older, less handsome than Pedro, but he is a serious man with serious passions. Yauba is committed to cooking and to his dream of one day returning to Puerto Rico and opening a restaurant — and he’s ready to help Rosa discover the world she’s lost by being born in New York:

“Who taught you to make Spanish food? Your mother?”
“It’s not Spanish food,” he says, an edge in his voice. “The only thing Spanish about Puerto Rican food is the onions, the olives, and the garlic. These plantains came over from Africa on the same boats as the slaves.”
“What slaves?” she asks, wondering how Yauba and everyone else knew so much more than she.
“The slaves that brought the plantains, yams, okra, and gandules. The Tainos had yucca, corn, leren, yautia, guava, soursop. Our food is criolla, just like the people, a mix of all three cultures. Just like us.”

Later, Rosa visits Yauba’s apartment for the first time and he cooks for her. Yauba takes Rosa seriously, having her taste his food as though she had a developed palate:

After the first mouthful of arroz con gandules, Rosa knows that this is love. At first she thinks the love overwhelming her…is for the dish and not the man, but after chewing and swallowing, she knows better. It is the man whose hand holds the spoon that she loves.”

Once again, as with music, Gautier’s ability to describe food and its preparation is breathtaking. Not only is the language descriptive and evocative of smells and textures and tastes, but it is also tied intimately with the personalities of the characters — and to their fates.

It’s possible to read Gautier’s collection as a guided tour of Afro-Puerto Rican culture — the music, the food, the landscapes both real and remembered — but this would, in a way, trivialize her achievement. What the stories in Now We Will Be Happy really do so impressively is compel the reader to pay attention to lives of breathtaking complexity: the capacity for joy, the embrace of family, feelings of pride in identity mixed with displacement, poverty, and violence. Yauba reminds Rosa that their people are criolla, and Gautier’s characters should remind the reader of their own places in a multicultural, pluralistic America. Read now against the backdrop of the current presidential election, this prize-winning fiction provides a moral and ethical vibrancy to which we should all pay attention.

Amina Gautier teaches in the Department of English at the University of Miami. She won the Flannery O’Connor Award for Short Fiction for her debut story collection At-Risk. Her collection The Loss of All Lost Things is forthcoming from Elixir Press. Her work has appeared in numerous literary journals, including Agni, Callaloo, Glimmer Train, Iowa Review, Kenyon Review, Prairie Schooner, Southern Review, and StoryQuarterly.

Jeffrey Condran is the author of the collection A Fingerprint Repeated (Press 53) and the novel Prague Summer (Counterpoint). His fiction has appeared in journals such as The Kenyon Review, The Missouri Review, and Epoch, and has been awarded the 2010 William Peden Prize and Pushcart Prize nominations. He is an Assistant Professor of English at the University of Arkansas at Little Rock and the Co-founder of Braddock Avenue Books.