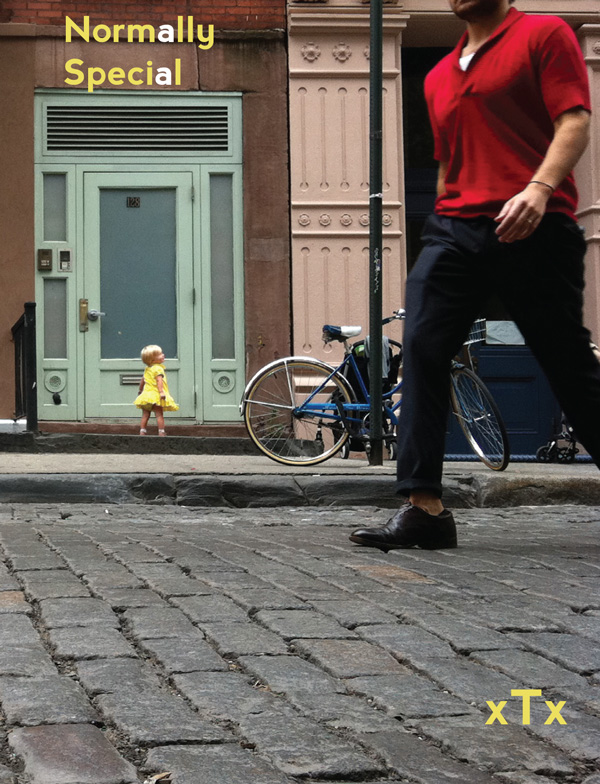 The stories in xTx’s collection Normally Special, published this year by the newly established Tiny Hardcore Press, can be divided into two categories, mostly on length, although that simple difference in word count also marks a diversity of voice and story complexity. This is not to say that the shorter stories in Normally Special are in some way less vibrant than the longer stories. They work instead as intense little flashes of voice or scene that mark an important beat between the fuller, longer pieces.

In “Father’s Day,” a young woman is on the phone with her father, wishing him a happy day while the memories of his abuse silently complete her side of the conversation. The story is not only difficult because of its explicit treatment of the subject,

“Bye, dad.” He’d always be the opposite of melted and I’d never feel like a princess. Even when he’d call me princess soft and soft, then louder and louder as if he were trying to make it true.

…but because it also begs the question as to why this woman would call her father in the first place. Why do they still have a relationship? What other layers of brokenness has this narrator left out? That ambiguity explodes this very short piece into a hinted story of far-greater implications.

The narrators of these short pieces are worth commenting on because there is very little differentiation between them—all first person, all with a similar emotional tone, and all concerned with the pain, aches and losses from a related set of categories. This harmony gives the collection a real sense of unity as well as gives the reader a feeling that these are all the fictionalized abstractions of one person’s experience. In this way, the reader becomes an authorized voyeur of the narrator’s confessions and revelations. This intimacy is both unnerving and a source of the collection’s appeal.

The longer stories, however, because of their ability to involve more detail and real narrative complexity, do not create the same narrator-confessor/reader-voyeur impression. Despite also working from a first-person narrator, these stories each create a separate and distinct narrator negotiating a unique fictional landscape, alive with its own set of difficult questions.

“The Mill Pond” is a story of childhood loneliness and abuse, although the abuse is conveyed to the reader through guarded reveals, obliquely told in the defeated tone of Tinkerbell, the story’s 13-year-old, overweight narrator. Tinkerbell spends her time staring at the sky above a small pond in her neighborhood, agonizing over her ugliness and looking, in a bored, uncommitted way, for the ruins of an old mill. Those ruins become a metaphor for the kind of change that Tinkerbell is looking for in her life. “The Mill Pond” is a painfully accurate snapshot of that particular moment of adolescence when a person begins to worry that life may never, in fact, get any better.

The most fascinating of the longer stories is “She Who Subjected the Sun,” a frightening alternate reality involving sexual and other forms of slavery. There is a strong echo of Margaret Atwood’s The Handmaid’s Tale in this piece but the echo is of a wilder, starker, more explicit kind. Atwood tells the story of a woman who was not much different, finally, than her readers and who was then easily praised for her bravery in rebellion against the dark system that controlled her. xTx turns the reader’s expectations upside down by writing a woman who finds a form of pleasure in her subjugation. She is horrified and terrified but she is also wholly conquered:

When the gun goes off there are reflexive screams from many of the Coveted, but not me. I am still busy with my mouth and tongue. “Good girl,” he says, praising my focus. I want to smile, but cannot. I know my Trial Master would be proud. More Dispatchers begin making some of the failed Coveted succumb and I don’t react. Their Buyers will be upset. I am again thankful I didn’t scream.

“You are doing well.” He pulls his thumb out of my mouth and rubs its slick wetness all over my lips, pushing them like clay, smearing them slippery. I close my eyes and make no attempt to stifle a moan.

He sees this. He knows. He laughs. “I have made a good investment.” And then, “Your testing is over.”

It is a deeply unsettling story, one which raises questions about violence in sexual relationships, about oppression in a general way, but also about the human ability to find pleasure in pain when this is the only kind of pleasure on offer.

And finally, just a word on “An Unsteady Place,” one of the best pieces of the entire collection. This is the story of a family away at the beach, at what should be a happy and relaxing vacation. But the mother begins to experience a disturbing disconnect from her children, her husband. xTx expresses the woman’s alienation in a series of surreal images and a story which becomes increasingly like a gruesome fairytale:

At the table, mottled beaks open wide revealing teeth spirals that wind crooked in rows upon rows and I know it’s not food they want. It rots before them piled and stacked hiding sailboats, crabs, and coral. I think it might be me they want, but even that I am not sure of. Nothing tender has come from them. I have not seen it. Have not looked for it. Have not given it.

Finally, what binds these two categories of stories together is their defiant femininity, perhaps not the first adjective that comes to mind with respect to Normally Special, but in its most basic sense, it is the truest description of the collection. These are women’s stories, extremely intimate with what it feels like to be a mother, a daughter, a sister, a lover. Most of the experiences that xTx explores, however, are the negative ones. The ways in which the world makes it difficult to be a woman. This is the painful territory of Normally Special, and although its darkness makes reading the collection an often disconcerting experience, the honesty and carefulness with which these stories present their difficult truths transform that disquiet into a form of sincere admiration.

xTx is a writer living in Southern California. She has been published in places like PANK, Smokelong, Monkeybicycle, Storyglossia, Kill Author and Wigleaf. Her new story collection, Normally Special, is available from Tiny Hardcore Press She says nothing at No Time to Say It.

Michelle Bailat-Jones is a writer and translator living in Switzerland. Her fiction, translations and criticism have appeared or are forthcoming in various journals, including Ascent, The Kenyon Review, The Quarterly Conversation, Hayden’s Ferry Review, Cerise Press and Fogged Clarity. She is the Reviews Editor here at Necessary Fiction.