In 2013, a Berlin-based micro-press called Readux Books launched the first of their “teeny books”. There are twelve of these hand-sized publications, released in three sets of four; the latest four were just released in June. As might be expected from its European center of operations, Readux is interested in contemporary European literature in translation (for now, Swedish and German) but also in Berlin-based fiction and essays. Each set of four, however, includes an English original. 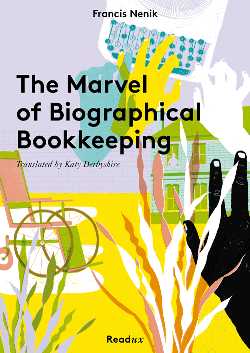 The very first offering from Readux, The Marvels of Biographical Bookkeeping by Francis Nenik and translated by Katy Derbyshire, is a fantastic piece of literature, as well as a perfect illustration of the kind of work that Readux seems most interested in publishing. In just sixty miniature pages, Nenik creates a two-part work that is both touching and hilarious. It opens with a journalistic piece describing the parallel lives of two poets, one English, one Czech, and their failed careers. The first delight of this piece is its structure—the men’s stories are given in parallel, one on each side of the page. We must read them simultaneously, a trick that demonstrates their shockingly similar lives. Nenik follows this with what is purportedly the record of the correspondence between the two men.

The book is written as if Nenik (or an unnamed narrator) is simply documenting the unusual coincidence of the resemblances between these two otherwise unconnected poets, and then their eventual connection. But whether any of this is “true” is beyond the point. Nenik creates, in what is really a very short piece, a quietly funny yet heartfelt examination of loneliness, failure, and literary ambition.

The rest of Series 1 includes two essays on Berlin—one from 1929, one from 2013, and both thoughtful attempts to engage with the heart of an extraordinary city and a writer’s relationship to it—and a piece of Swedish fiction in translation, Fantasy by Malte Persson. The contrast between the two Berlin essays is both gentle and revealing. In the first book, In Berlin: Day and Night in 1929, which is actually a bundle of two shorter essays, Franz Hessel paints the city in all its movement and people and colors. It is a frenzy of description, an admiring portrait of a city that is viscerally alive. Hessel’s tone is both appreciative but also bemused and curious about the great changes transforming the city.

Roundabout the tables, whispers fly like in the best of Europe. That is, in the new Berlin one doesn’t speak as loudly as in the old one.

In the second essay, City of Rumor: The Compulsion to Write About Berlin Gideon Lewis-Kraus struggles with the very act of putting anything about Berlin into words. He, too, is looking at the city’s energy, but specifically as a writer, and he discusses how visitors and expats are often compelled to distill and analyze the aesthetic of their temporary homes. It becomes a kind of enchantment, both good and bad, that the writer wants very desperately to both understand and master. Finally, in the space of years and events that lies between these two pieces is all of Berlin’s post-war history. That stretch of time is an interesting one and Readux has chosen to bookend it, which opens up another avenue for discussion.

Series 2, published in the Spring of 2014, is a bundle of four fiction pieces, three translations (two German, one Swedish) and one English original. Flight by Adrian Todd Zuniga is a brutally comic death AND life-after-death story. This is dark humor, presented boldly and unapologetically, but with just a trace of a satirical new-age-y feel. Zuniga details the events and reactions, broken part by broken part, as a commercial airplane disintegrates, killing everyone on board. This is, as we all know, most decidedly not fair game for comedy and yet Zuniga pulls it off with the right combination of irreverence and genuine feeling:

Nicole pulls her cell phone from her jacket pocket, holds it out to the woman. “If you could maybe leave that as my outgoing message,” Nicole says, “Since, you know, this is only happening to you.”

The woman goes quiet—her eyes puzzle Nicole’s reaction—then she raises her right hand and rakes at Nicole’s eyes with her chewed finger nubs. Nicole slaps the attack off target, the woman buckles into sobs. “Fine,” Nicole says. She puts her arm around the woman’s shoulder and pulls her close. 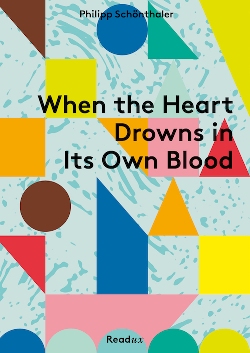 Also in Series 2 is Philipp Schönthaler’s When the Heart Drowns in Its Own Blood (tr. Amanda DeMarco). This intense little piece is about Termann, a free diver, and his preparations for an upcoming dive that will take him deeper than he’s ever gone before. The genius of this piece is Termann’s philosophizing, which he seemingly dispenses to any available listener, and most of which follows this general tone:

To the cameraman smoking a cigarette outside on the terrace: “Don’t forget, there is no medical explanation for how human beings are able to survive at these depths unassisted.”

To the cable puller: “How do we know that the thoughts that come to us in dreams are any more false than the others?”

Schönthaler makes Termann fairly ridiculous, but he does this so gently, so kindly, that while the reader can’t help finding him terribly absurd, we also end up urging him on, believing in his pronouncements, believing in him and taking some of his “philosophy of the deep” to heart. 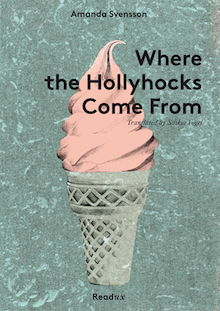 As mentioned above, Series 3 came out this summer and its four mini-books include two fiction pieces and two more essays on Berlin. There are now four “books” on Berlin in Readux’s catalog, providing an elegant and thoughtful series of “writing on place.” Taken together, these four essays are a wonderful starting point for those who have already experienced Berlin as well as anyone interested in the city for questions of travel or history, or even, more generally, contemporary urban landscapes.

Where the Hollyhocks Come From by Swedish author Amanda Svensson (tr. Saskia Vogel) is a one-breath kind of story, thirty little pages that must be read from start to finish in one go. The narrator tells us—haltingly, but with no easy place for the reader to rest and take a breath—of an encounter with a strange woman when he has gone south to see his grandmother before she dies. The intensity here is about the woman’s strangeness, and the way it both attracts and repels him. The story, which contains a surprise, moves also, in a curious way, from a kind of awkward exhilaration to a frustrated sorrow. This emotional movement is one of the story’s strongest elements, as is its poetic language and imagery.

It is very tempting to write about each and every one of these twelve “teensy books” but I am leaving spaces in this discussion on purpose, room for individual reader discovery. Yet it must be said that each of the twelve is worthy of a much longer discussion, a review in its own right. These are short publications (the longest coming in at 60 pages) but none of them is small. The essays on Berlin have created a kind of mini-library, and I look forward to seeing it expand, crossing my fingers that as it deepens its focus on Berlin perhaps it will move on to other great European cities as well. And the fiction—both in translation and English original—is unique, provocative, funny and emotionally interesting. Along with these two most important elements, each Readux book is also a beautifully-designed object, a very nice touch that only enhances the offering from this exciting new publisher.