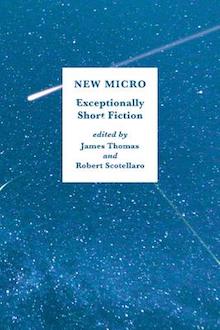 Flash fiction has flourished since the publication of Sudden Fiction in 1983, which included stories no longer than 1,500 words. In 1986, Jerome Stern challenged fiction writers to compress their stories further when he launched The World’s Best Short-Short Story Contest at Florida State University, which limited entries to 250 words. “Trying to write a serious piece of fiction in under 250 words sounds at first like being asked to perform a particularly perverse experiment, like being asked to paint a landscape on a grain of rice,” he wrote a decade later in the introduction to Micro Fiction: An Anthology of Fifty Really Short Stories, a collection of stories both drawn from the contest and commissioned from other writers, for whom the word limit was expanded to 300. New Micro: Exceptionally Short Fiction, edited by James Thomas and Robert Scotellaro, is a new anthology of 300-or-fewer-word “micros” whose title is a tribute to Stern’s earlier anthology.

The task of writing serious fiction within a seriously limited word count is indeed an experiment (though perhaps not so perverse), and it’s their experimental nature that accounts for both the fun of reading micros and the range of forms they take. Whether a particular micro is “really” a prose poem rather than a short-short story is, in the end, beside the point. What matters most is their revelation of character, through the drama of the voice, the lyric moment, or a narrative turn; and the best micros belie their length in their lasting effect on the reader.

In this anthology, micros such as “Custodian” by Brian Hinshaw, “The Man in Bogotá” by Amy Hempel, and “Four Hard Facts about Water” by Damian Dressick reveal the breadth of narrative that is possible within 300 words. Hinshaw’s story begins with a simple premise, of a custodian at a nursing home who, “for a kick,” would sing with one of the residents, who can neither speak nor eat but sings “like a house on fire.” When the old woman’s daughter or granddaughter observes the narrator singing “Auld Lang Syne” with her, the story takes an unexpectedly deeply felt turn. Hempel’s story, in just over 200 words, is actually a story within a story, a parable about a kidnapping whose lesson helps the narrator talk a woman down from a ledge. And Dressick’s story does not appear at first even to be a narrative: the first three “hard facts” listed by the narrator seem to have nothing to do with each other but come together in the telling of the fourth, tragic fact.

Other micros are grounded more in dramatic or lyric expression than in the unfolding of narrative. Roberta Allen’s stories, for example, are delights of the imagination. In “The Fly,” the narrator reflects on the meaning of her lover’s extracting a fly from her ear, leading to a question about the meaning of meaning itself. And in “The Beheading,” her narrator contemplates the beheading of a companion, possibly by his wife, who, as a nurse, “probably knows the cleanest, most efficient way of beheading him, though that’s probably not something they teach in nursing school.” “The Old Days” by Lynn Mundell draws the reader in with a provocative voice — “In the old days, there was no Human Resources. You worked or you were canned” — that sums up the story of a life that went “downhill pretty quick” and concluded in sorrow and longing. Yet other stories, such as “AM:103” by Amelia Gray, “Furnace” by Kevin Griffith, and “Long-Term Memory” by James Tate, bring the reader into strange worlds where a character’s youth can be returned to her in a box, or where a character might learn that a statue has been erected of him to commemorate deeds he has no recollection of accomplishing.

Contributing to the surprises of the micros is their sequence, which is neither chronological nor alphabetical by the authors’ names; the micros are arranged to be read one after another, each new tale subtly resonating in theme or setting with the one that came before it. What’s unclear, though, is the principle according to which stories were included. As the title suggests, the majority of the micros in the anthology are in fact quite new, first published within the last decade or so, but sprinkled among the newer micros are stories that are decades old, including “Women When They Put Their Clothes on in the Morning” by Richard Brautigan, from 1971. Given the inclusion of these stories dated from before or around the time that Stern’s Micro Fiction was published, this newer anthology isn’t entirely a follow-up of the older one.

What’s particularly disappointing is that the editors did not include more work by nonwhite writers. Given the list of the authors’ books at the back of the anthology, the editors clearly imagine that readers will go on to seek other work by those writers whose micros they especially liked. Why include old stories by Brautigan, then, or Joyce Carol Oates? Why not make space instead for newer work by Rahawa Haile, Sejal Shah, Megan Giddings, and others? Giddings’s frustration with the whiteness of the flash fiction community, in fact, has spurred her to create an anthology of flash fiction and craft essays featuring writers of color exclusively; the need for such a project emphasizes that New Micro represents a missed opportunity to expand readership to an even more diverse population of writers. The 140 micros in the anthology are a pleasure to read — funny, provoking, and sad. What additional varieties of pleasurable and provoking reading could have been included as well?

Robert Scotellaro is the author of Bad Motel and Measuring the Distance. He lives in San Francisco.