Never Anyone But You by Rupert Thomson 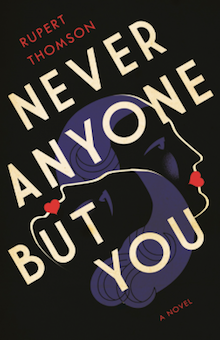 Never Anyone But You is the story of the lives of two French intellectuals, who lived together in Nantes, Paris and on the island of Jersey between 1917 and 1954: Lucie Schwob and Suzanne Malherbe. Both were artists, better known as Claude Cahun and Marcel Moore. The story is told through the eyes and voice of Suzanne — the lesser known of the couple who were lovers (and, conveniently, step-sisters). It recounts the love of two real people whose lives encompassed events still historically close but far enough away to have the aura of romanticism: the heady combination of art, literature and politics in Paris in the 1920s and 30s, the rise of anti-Semitism, fascism and the Nazi occupation of Jersey where the pair were imprisoned and sentenced to death for propaganda.

Claude Cahun was an essayist, poet, actress and photographer many of whose printed works and extensive correspondence have survived. Various exhibitions, catalogues and translations into English from the 1980s onwards (not to mention the French academic François Leperlier’s definitive text Claude Cahun: L’Exotisme intérieur) have made her known to a new public. Marcel Moore was a graphic artist and photographer little of whose work has survived apart from her contributions to some of Cahun’s major texts and photomontages.

Through the eyes of Suzanne, the reader has a privileged view — from the inside of a relationship — where historical truth is superseded. A flash-forward at the very beginning projects the reader, like the dropping bombs, into the heart of the story that will gradually unfold, creating a tension between what has already happened and what is to come. The story opens during World War II: the text talks of swastikas, the BBC, the Nazis, “our boys”, Churchill, the Channel Islands. Reality. The first scene describes Suzanne swimming in the sea when planes came over. Claude was at the house: “I saw everything, she said. Even the faces of the pilots.” How the couple react is (probably) fiction.

Their life together explores creation: self-creation, artistic creation, experimentation with appearance, masks, role play, binomial, bisexual, multilingual, Jewish/Catholic/Protestant existence. Claude/Lucie is a complex, impossible character, even seen through the lens of love. She experiments with starvation (so as to be able to write better), with ether, with suicide. She changes her name not simply to sound like a man but to challenge preconceptions: “Your identity should not be imposed on you … You have to create it yourself.” She recreates herself when she goes to school in England — not as a Jew, simply as a foreigner — and, when someone in a Paris bar thinks she is a boy, “She was delighted to have escaped the prison of her gender, the tight cage of her sex .” “Her body was a page on which the lack of food would write its story … She saw the starved version of herself as yet another incarnation.” She is shifting like a hologram of a Cubist painting.

The novel moves to Jersey from Surrealist Paris, where Cahun and Moore were acquainted with the literary and artistic élite — their names are scattered lightly (and credibly): Louis Aragon, Sylvia Beach, André Breton, Salvador Dali, Robert Desnos, Paul Eluard, Henri Michaux, Adrienne Monnier; and “Once, in Le Dôme, we sat next to Apollinaire, the poet who had coined the word ‘surrealism.’” Paris society glitters like Claude’s gold shaven head. Political discussions include the beginnings of Resistance — a concept that appealed essentially to Claude who used propaganda to try to destabilize the German occupying force on Jersey. She resisted control throughout her life:

The idea that she might be treated just like anybody else represented an assault on her belief that she should be free to create and define herself, with no interference and no limitations. It unmade what she had worked so hard to make — the constantly shifting construct that was herself. (299)

Throughout the novel, Suzanne describes photographs she takes, often under Claude’s direction. Some of these are extant (for example, in the collection of the Jersey Heritage Trust): a (self-) portrait of Claude from around 1914 with her hair spread around her head on a white background; one from around 1928, taken from high above, with Claude posing on a sheet; one referred to several times, taken in 1945 after their release from prison, where Claude wearing a headscarf and outdoor clothes poses in a doorway with a metal eagle between her teeth.

She said the photographs we took together came from dreams … The photographs were dreams. Attempts to capture or decode her volatile and fluctuating self. Attempts at the impossible, in other words, for even as the shutter clicked she was beginning to change into someone else. Something else. (281)

Through descriptions of these photographs, through the excellent dialogues between characters, the reader is wholly involved in the narrator’s story. Actual friends of the couple — for example, the Swiss Charles-Henri Barbier — are solid links to history yet the story is biased by being told by the only survivor. In parallel with the difficult and controversial work that Claude produced in 1930, Aveux non avenus (Disavowals), this is a work of confessions. Suzanne confesses that she put an end to a possible love affair between Claude and Bob, she tells about Claude’s violent/mad outbreaks, how hurt she had been when described as a weight (rather than a stable rock). She hears the confession of the tobacconist who denounced them to the Germans. She voices suspicions that Claude’s suicide attempts were mainly attention seeking. This is her point of view. But at the same time, the reader is warned that words are not always reliable:

Words are a compromise forced on us by reality. … Words are approximate. The more capable a writer is, the less approximate they are, but there will always be a gap. … They have yet to be corrupted by being placed next to other words. The dictionary is pure. It’s the only pure book. (attributed to Michaux, 160)

After the 1940 flash-forward that opens the novel, its other sections each have a title and dates of the period covered. This precision also lends authority to the narration. The next to last section, “Afterlife 1954-1970,” covers the period after Claude/Lucie’s death where Suzanne is living out a life without focus, where the photographs she takes have no subject:

The last section, “Reading palms 1972,” is part flash-forward (as Suzanne plans her suicide and imagines how her body will be discovered), part dream (returning to the images she had used to survive imprisonment) and part flashback to a visit to Paris 20 years before to Robert Desnos’ widow. The exquisite mixture of dream and reality, remembrance and detailed present, bright colours, shade and texture link the physical pain and intellectual pleasure: “Once dead I will no longer be aware of living without her … You were everything to me, whether you liked it or not. There was never anyone but you.”

So the reader discovers the source of the title — a Desnos poem — and the tenderness of farewells to both characters remains:

The shadows were so black that it looked as if pieces had gone missing from the world. I remember watching Lucie climb the tiled steps and pass through the doorway into the darkness of the house but I don’t remember her coming out again, though I suppose she must have … I only remember the steps up to the open door. (345)

Always the photographer’s perspective. There is so much more to this intense novel. Historical facts are only part of truth. The narrator tells her version. Evidence, even that of photographs — the most durable element of their relationship — is always partial.

Rupert Thomson is the author of nine highly acclaimed novels, including Secrecy; The Insult, which was shortlisted for the Guardian Fiction Prize and selected by David Bowie as one of his 100 Must-Read Books of All Time; The Book of Revelation, which was made into a feature film by Ana Kokkinos; and Death of a Murderer, which was shortlisted for the Costa Novel of the Year Award. His memoir, This Party’s Got to Stop, was named Writers’ Guild Non-Fiction Book of the Year. He lives in London.