Near Haven by Matthew Stephen Sirois 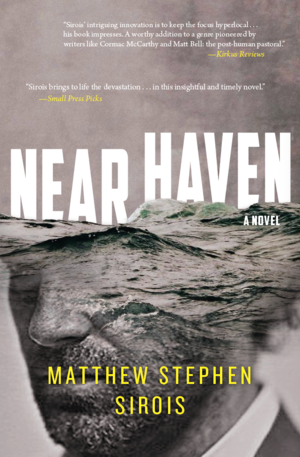 Near Haven opens with a confession from Sir Isaac Newton: “I can calculate the motion of the heavenly bodies, but not the madness of people.” Matthew Stephen Sirois’s debut novel is split into four parts, and each begins with an apt epigraph. In due time, the Newton line proves to be a perfect overture for not only the first part of the story but for the novel as a whole.

The end of the world is nigh—and it’s only 1987. Scientists have calculated the precise day—almost a year away, at the top of the story—that a comet will collide with our planet and destroy human life as we know it. With the Earth’s date of death known, social order has crumbled. Reagan’s federal government has gone “underground,” and an anarchic dog-eat-dog form of civilization has manifested. Panic and desperation have bred violent and lawless behavior in and around the coastal (and fictional) Near Haven, Maine. One person, amidst this impending catastrophe, who has retained his humanity is Tom Beaumont, a boatman and the hero of this tale. A natural skeptic, Tom doubts that the comet will hit. He also suspects that certain folks in power may have concocted this supposed doomsday for some type of personal gain, maintaining that “there’s a motive” behind it all.

Sirois shows early on that he is unafraid of action. He composes shoot-out scenes that are both direct and gripping, without bogging down the narrative with extraneous detail. Through these sequences, Sirois reveals tons of character—Tom’s reluctant readiness, for instance, to commit a bloody deed if a friend’s survival is at stake—a situation that happens as often as one would expect for a backdrop that disregards rule of law. Motley guerilla groups raid properties for food, fuel, water, livestock, and any other dwindling resource that comes to mind—and they are willing to kill for it—so, of course, Tom and his company must thwart them by any means necessary. These explosive circumstances sometimes result in unplanned deaths, which definitely weigh on Tom’s conscience. Despite the unwanted blood on his hands, he perseveres with hope for the future, as unrealistic as it may seem, intact.

The symbol of Tom’s hope appears in the form of a boat-in-progress. Prior to the apocalyptic scare plaguing the planet, Tom had begun an apprenticeship in boatbuilding, a craft that demands “objectivity.” He says that “if you build a boat and it sinks, then you’ve done it wrong. There was…some flaw in your assessment of the world.” With his mentor dead and the world in disarray, Tom vows to complete the maritime vessel that he had been contracted to construct by hand. He plans for the boat to be in seaworthy shape in time for civilization—whatever new form it may take—to be restored. He is not sure what role his vessel will serve, or even what role he will serve, but he holds firm onto the notion that there will be a part to play, for “our sense of life as being meaningful is what keeps us from falling apart.” Considering the extreme rashness that surrounds Tom, it seems awfully bold—almost foolish in fact—that he would flat-out reject the cataclysmic prognostications that have been handed down from authority figures.

Tom Beaumont’s righteousness echoes another literary Tom from a desolate environment—Tom Joad from John Steinbeck’s The Grapes of Wrath. Both men have returned home after significant time away. Beaumont, a man with a foggy past, came home four years ahead of the novel’s opening and has been “living as somebody else” ever since, while Joad returns home on parole from a murder sentence. Both Toms, all things considered, are capable of committing acts of great violence for the greater good—both willing to do what needs to be done to ensure the safety of those close to them. In both settings, food and resources grow scarcer every day, which fuels the toxic anxiety of Beaumont’s speculative American Northeast of the 1980s and Joad’s real-life American Dust Bowl of the 1930s. “How can you frighten a man whose hunger is not only in his own cramped stomach but in the wretched bellies of his children?” Steinbeck asks. “You can’t scare him—he has known fear beyond every other.” Beaumont experiences firsthand the heart-wrenching truth of those words. Fear-based madness infects the two Toms’ worlds—worlds that mirror one another beautifully.

Sirois seems to have set Near Haven at the tail end of the Cold War with intention. That period in American history, like today, has been marred with hysteria and a high level of cognitive dissonance. Consider the present day United States, a land riddled with tenacious individuals conditioned to distrust reason, to label non-alternative facts as fake news, to condemn critical thinking, to thoughtlessly believe TV’s talking heads, and so on. While versions of such behaviors undoubtedly existed during the red scare of the actual Reagan years, they are present front and center in Sirois’s 1980s—a time in which “reality itself is a partisan issue,” a short-fused state of mind that absolutely resonates with the state of the United States today. True to form, Sirois opens the concluding fourth part of his novel with an epigraph that brilliantly sums up the tone leading up to the finale: “Admire the world for never ending on you—as you would admire an opponent,” advises Annie Dillard, “without taking your eyes from him, or walking away.”

Matthew Sirois was born and raised in midcoast Maine. His fiction and essays have appeared in The New Guard Review, Necessary Fiction, Split Lip Magazine and The Ghost Story, among others. He attended the Richard Hugo House Master Class in Prose (Seattle, 2012) and The Writer’s Hotel Master Class in Fiction (NYC, 2015). Matthew has read for audiences in such venues as the Rendezvous, Seattle, and KGB Bar in the East Village. He lives in western Massachusetts with his wife and daughter.

Brandon Stanwyck lives in Cleveland. His writing has appeared in Cleaver Magazine, The Fiction Pool, and Corvus Review. Twitter: @BrandonStanwyck.
Share This