My Father Is an Angry Storm Cloud by Melissa Reddish 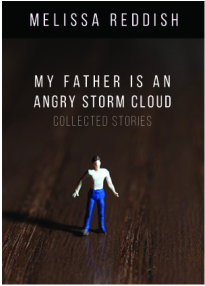 My Father is an Angry Storm Cloud is a curious collection of tales. Taken as a whole, the stories present themselves as a loose coalition of rivals vying for the title of standout. Fortunately, there is some competition for this spot, and through her broad stylistic range, Melissa Reddish turns the predictable on its head in just about every story.

Each piece in the collection originally appeared elsewhere, though there is discrepancy between the book’s acknowledgements page and the author’s website. Reddish’s disparate list of publications, which includes Columbia College Literary Review, Paper Nautilus, and The Speculative Edge, points to a versatility that is perhaps indeed what ties the stories in Storm Cloud together. Consider also the author’s background as a poet and essayist, and the disjointed nature of the collection takes on a certain relevance.

Most of the stories in this collection bear the mark of the poet, and Reddish’s prose is most compelling when her lyricism is evident:

She draws a map on her body, starting with the very tips of her fingers. There are lines like capillaries leading to all of the places she has been. She winds a pink path down her stomach, circles the small hump of her thigh. She has symbols for all of the important places. A circle for her childhood home. A triangle for the hospital where she was born. A heart on her wrist for Benjamin.

Yet these stories display little of the poet’s penchant for brevity. If some of them feel overly long, it is likely due to the occasional flight of excessive exposition, not lyrical caprice. It is hard to believe that “Grade A” would be a lesser story without the nearly two page description of how the narrator landed his job at a slaughterhouse. On the other hand, it would be tragic to omit the line “She smiled and it was radiant, like sunflowers in bloom or an atomic bomb. I wanted to know how to say in Spanish “Your smile holds the heat of a thousand suns burning in my soul.”

If the stories in Storm Cloud exist in separate but parallel worlds, Reddish’s characters are nonetheless possessed by the same restless spirit. They are travelers in the literal and figurative sense, and the author is bold enough to keep the nature of their final destinations hidden. In “Barley,” Rachel inexplicably encounters, then falls for, a man tiny enough to fit into a shoebox. Our protagonist knows the relationship can never work, yet like all human beings, the powerful urge for companionship quickly overwhelms her sense of reason.

Most of these stories possess elements of the surreal, but Reddish injects a thematic relevance that renders them charmingly feasible. Think The Twilight Zone, but with more female leads. Take “Baby Blues,” in which the narrator and his live-in girlfriend discover a baby growing in the backyard of their depressing condo. It is revealed that the issue of having children has become a point of contention for the couple, making the plant baby’s appearance amidst their strife almost natural. Without spoiling the finale, “Baby Blues” ends with the couple fighting over the plant baby in a scene reminiscent of the concluding lines of Carver’s “Popular Mechanics.”

The collection’s centerpiece is the stunningly original “Protest.” The narrator’s son Jacob seems to stand in for all the innocents who struggle to make sense of tragedy. He covers his face with a paper bag after Columbine, somehow finds and adorns himself with heavy steel chains when he learns the name Matthew Shepard, covers himself with colored lights for Waco, and continues back in time all the way to the Hindenburg disaster. The storyline reaches a breaking point on September 11th, 2001, when Jacob and his mother are forced to confront tragedy unfolding before their eyes. Jacob wraps himself in Ace bandages, and his mother chooses to finally confront his bizarre behavior by unwrapping him. What she finds is shocking, and Reddish delivers an ending that, like a loving hand emerging unexpectedly out of the dark, surprises with its tenderness.

While the scope of “Protest” sets it apart, there are other stories in Storm Cloud that shimmer with lyrical and thematic potency. The title story, with its heightened imagery, staccato rhythms, and emotional density, reads like a prose poem. Theresa alternatively craves or is repulsed by reminders of her long-absent father. She reserves a special kind of resentment for her mother, and enough self-loathing to drown in:

She wants to punch her mother in the mouth. She wants to slice a thin red line down the length of her arm to see her own veins glittering. She knows she is made from broken pottery, worm guts, stars. Everything, herself included, is combustible.

“Hunger,” the final story, is a fairy tale. Since losing her husband in a tragic accident ten years ago, Mary has lost her appetite for food and her desire for motherhood. When two children arrive mysteriously from the woods, she tries desperately to feed and care for them, but they are insatiable. Eventually, they force her to retreat into the same dream world that so many of Reddish’s characters pass through.

Not every story in Storm Cloud hits its mark with such accuracy. The narrative thread of “Roadkill” is tangled with fruitless alternations between third person and second person points of view, while “A Haunting” plays with matches, but never really ignites. Still, there is enough polish and downright originality in both stories to be refreshed, if not dazzled by them.

If My Father is an Angry Storm Cloud showcases the best of Melissa Reddish’s short fiction, there is much to celebrate. She successfully brings forth universal elements of the human experience — motherhood, loneliness, misfortune, hope, despair — with enough nuance to highlight varying shades of each. The best stories in this collection are complex and dense, warranting more than one reading.

The tales in this collection are not risky or difficult to parse out, yet they possess undeniable depth of meaning. At their best, they are earnest reminders that journeys need never end, and questions need never be answered. Reddish gently encourages us to find meaning in the unexplained and question the value of certainty. When approaching these stories, it may be beneficial to view their loose ends as nothing but a beautiful fringe.

Melissa Reddish is the author of a flash fiction collection, The Distance Between Us (Red Bird Chapbooks, 2013). Her stories, poems, and reviews have appeared in print and online journals. When not writing, she teaches English and directs the Honors Program at Wor-Wic Community College. She lives on the Eastern Shore of Maryland with her husband, dog, and cat, where she does stereotypical Eastern Shore things like eat crabs smothered in Old Bay and go for long walks down by the water with her black lab. She blogs very occasionally at melissareddish.com.

Christopher Santantasio is a native of New York’s Hudson Valley. His writing has appeared in Music Educator’s Journal, Necessary Fiction, Word Riot, and elsewhere. He lives with his partner in Philadelphia, where he teaches kids who learn differently. He blogs about fiction and LGBTQ issues at www.crsantantasio.com and tweets @CRSantantasio.