My Business is to Create by Eric G. Wilson 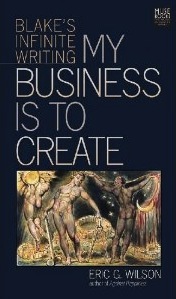 University of Iowa Press, May 2011

A dying man on his bed, feverish, sick with liver pain, exhausted from years of illness and poverty. He knows he hasn’t much time and yet he does not rest, he does not lie back and simply think over his life. He is still alive, and life equals work. He cannot stop working. Paper to pencil, mind bent to his artistry, he continues tracing out the lines of his vision. Transposing creative thought into tangible object until only a few moments before his inevitable death. Thus goes the story of the final moments of the 18th century poet and artist William Blake.

It isn’t difficult to find inspiration in this portrait of a man so zealous, so passionate, so committed to his artistic vision. Indeed, generations of writers, musicians and artists have channeled Blake’s particular revelation. Eric G. Wilson, the Thomas H. Pritchard Professor of English at Wake Forest University, has spent a considerable amount of time with William Blake. He has clearly reveled in his poetry, admired and studied his artwork as well as read most of the significant works of Blakean scholarship available. Wilson’s testament to this Blakean commitment is a passionately elegant little book called My Business is to Create: Blake’s Infinite Writing.

The book is not only a compelling homage to Blake’s artistic devotion and imaginative vision, but it is also a way of re-visioning the creative process. Part Blakean analysis and part handbook for poets and writers, My Business is to Create offers a creative perspective inspired by a combination of Blake’s peculiar mysticism and his nearly-heroic diligence.

In many ways, Blake is an ideal model for a struggling artist. Despite physical and emotional set-backs, despite poverty and little recognition for his work during his lifetime, Blake remained fiercely devoted to his unique artistic vision. He simply never gave up, never gave in. How did he maintain such unflagging artistic energy? Wilson describes Blake’s creativity as aggressive, not just against the political and religious systems he rejected, but against itself. A kind of mental warfare as a path to creative ecstasy:

Blake’s poetry is aggressive, a verbal assault inspiring antagonistic responses: the strife of creation. To read, to perceive, as Blake describes, require the almost impossible destruction of a lifetime of protective thought and a courageous exposure to unruly powers. Proper composing necessitates the same: each moment to fight against all that you said the instant before, to attack yourself constantly, to annihilate your draft and start anew.

This kind of tenacious self-criticism is made possible by cultivating what Wilson calls energetic seeing. He warns against separating imagination from observation, insisting on the existence of a deep relationship between the two. It is only through intense, careful scrutiny of the world that imaginative vision becomes possible. A bit like looking at a familiar object too long, suddenly it begins to shift, change shape, take on new meaning.

Through Blake, Wilson is interested in pushing the writer and the poet onto a perilous but inspiring little ledge – an elevated point with a breathtaking backward view of tradition and a pathway out into the nothingness, maintained aloft with pureness of vision, commitment to innovation and a near religious ecstasy in creative production. Poised on this precipice is where a writer can find Blake’s Infinite Writing:

Transcendental ironists, we turn our lives to texts – poems, novels, essays – that endlessly revise themselves, constantly reflecting on how what has been has informed what is and on how what is will compose what will be. These loops are ceaseless: we circle back to go forward, forward to go back, each time gathering more information, becoming wider and deeper in our knowing, pushing from familiar to unfamiliar, security to risk. This is a writing that is infinite, an eternal composition, draft after draft after draft, an editorial mysticism whose goal is not the “final,” but the “farther.”

This is a beautiful way of perceiving one’s creative capacity. Endless yet determined. However, perhaps one of the most captivating ideas from the entire book comes in the last chapter, when Wilson describes what it should feel like to embrace Blakean creativity:

The Blakean mood for creating is well-intimated by a German term, Sehnsucht. This word usually translates as “longing,” and it points to a sharp yearning for an inaccessible object. This pining, though painful, is also ecstatic, for it is a perpetual contemplation of the desired thing, an earnest gaze on what, if ever grasped, would bring consummate bliss. When we feel this kind of ache, we are ardent for being inconsolable. We hold adoringly to the emptiness.

How liberating – this idea that what makes good writing is the ecstatic longing behind it. The desire to create becomes self-fulfilling.

Wilson’s enthusiasm throughout My Business is to Create is contagious, and the book, though at times a little opaque, is a truly inspirational text. This is about “art for art’s sake.” About no compromises. About diligence and passion. About accepting creativity as personal faith.