Moonflower, Nightshade, All the Hours of the Day by JD Scott 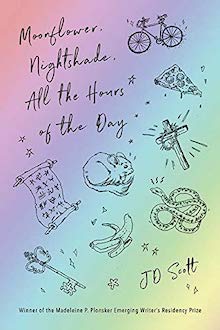 The stories and novella of JD Scott’s Moonflower, Nightshade, All the Hours of the Day might be called fabulist, literary, millennial, parable-ish, or bildungsroman, but, as soon as the collection seems pin-able, another enchanting element surfaces. Scott’s range and rhythms delight. In one story, an insomniac narrator ruminates on the nature of reality via Wile E. Coyote. In another, a chinchilla’s death precedes the death of a relationship. A mother disrupts time and space to rescue her son. A twin returns from a watery grave to help his sister make another kind of passing. In a post-apocalyptic world, all land is mall, and all mall is living, changing, organic matter. The collection sings with bicycles, flowers, the vastness of existence, and good old-fashioned obsessive relationships, all in the name of a deep and pleasing exploration of love, power, and commerce, and how to map a life within and without their bounds.

Scott conjures lush, vicious settings. Every plant seems playfully carnivorous, every swamp, strip-mall, or pothos-draped apartment nook entices and forebodes like a fairytale wood. In “Night Things,” “will-o-wisps buzzed as filament in cracked lightbulbs” in the Everglades, while the protagonist of “Chinchilla” “nearly cried from bearing witness to all those teeming aisles: the yarn, the build-your-own-doll parts and all the Pantone hues of oil” before shoplifting “a few small tubes of lemon, ultramarine, and cadmium into my jeans” in a suburban craft store.

Scott is attuned to the rhythms of city, suburb, and wild and the way that commerce shapes each of these spaces. They conjure each locale with hyperrealism, delivering details so vivid and plentiful that each story reads in technicolor. Often, the boundaries between city, suburb, and wild pulse with significance. In “The Teenager,” the main character, aptly named “the teenage boy,” is chased from his familiar suburbs to the wild behind a K-Mart, where he discovers “a broken folding chair and layers of blankets on the ground, sheltered only by blue tarps nailed between trees.” The teenage boy crosses not just a physical threshold, but one that forces him to reckon with the systems that shape his world: “He thought, for the first time, how someone ends up living in the undergrowth behind a strip mall. This felt like a lesson. The moral of the story is. Be rich. Grow up. Be white. Be tall. Be a man. Be blameless. Be that type of adult. Only fuck up when no one is watching. Or fuck up in public if you hold the power. Who holds the power?”

Who holds the power? Scott turns this question around and around in their palm. They never force an answer, leaving room for observation, conversation, and contradiction. In the title story “Moonflower, Nightshade, All the Hours of the Day,” power and possession tangle through romantic love. The story, set in Manhattan, delights with a time-lapse-like portrait of city life — the narrator zips around on their bike, brilliant and precise in their observations — and a dream inherited apartment (“It took step-by-step to move in with him, to bring the sledgehammer to the walls, to suspend the pothos from all those hooks”) while, inch-by-inch Scott pulls back the curtain to reveal the cogs of a relationship constructed from attraction, desperation and a startling web of power. The reader is left to consider the macabre question: how far will the narrator go to level the playing field between their partner (possessing good looks, an inheritance, the conventional trappings of power) and themself (possessing cunning, knowledge, and an inclination to harm)?

Scott’s characters are often intelligent semi-outsiders, teetering between a life trajectory safely delineated by convention and an existence outside expectations. Joshua, the protagonist of the collection’s novella, “After the End of the World Came the Mall, and The Mall Was Everything,” explains: “I’ve emerged on some other side past the automations that high school required…There is no one left to give me instructions, tell me how to become this person I want to become. I have to figure this mall life out for myself.” Joshua’s ordered mall world where, in the recent past “it was too hot, the air changed, the people changed…commerce became not an idea but a beast whose belly we live inside” is constantly under siege by magical beings who tempt adolescents with a wild, magical alternate life outside convention and commerce. Joshua hovers at the threshold. He knows he’s about to become an adult, but what kind?

Throughout, Scott’s prose is spectacular, insightful: dripping with music, profundity, and dark hilarity. This is a collection readers will dogear, underline, and return to. In “The Teenager,” Scott uses their gifts to conjure a razor-sharp sense of time, place, and suburban sprawl: “The chemical cheese slid off its tomato-flesh, onto his tray in a plop, leaving a red triangle behind.” Readers looking for a morbid laugh will delight in “Chinchilla,” where the narrator proclaims: “I thought my lover would find this attention to detail sweet, but the cute body bag went unacknowledged,” after crafting a fancy body bag for a dead pet.

Formally, Scott is equally playful and bold. “Their Sons Return Home to Die” is told in a gorgeous, eerie, collective voice. Though the story’s “sons” are isolated and in pain, this voice gently points to the beauty of shared experience.“The Hand that Sews” breaks its pattern of lyric, fraggy paragraphs to tell the most emotional moment of the collection through a text message, displayed on the face of an iPhone.

Scott conjures their alternate worlds with dexterity and delight. The collection’s stories dance on liminality. Where is the line between life and death? Between life and commerce? Between the organic world and the human-made world? Between humans and animals? Between lovers? It’s tempting to look for parable in stories filled with magic. But, as soon as an otherworldly element seems about to settle into metaphor or lesson, Scott’s stories flit away, leaving the characters as living, breathing people who are navigating this thicket the best they can.

JD Scott is the author of Moonflower, Nightshade, All the Hours of the Day (&NOW Books, 2020), a debut short story collection which won the 2018 Madeleine P. Plonsker Emerging Writer’s Residency Prize. Their debut poetry collection, Mask for Mask, is forthcoming from New Rivers Press in 2021. Scott has also authored two poetry chapbooks: FUNERALS & THRONES (Birds of Lace Press, 2013) and Night Errands (YellowJacket Press, 2012), which was the winner of the 2011 Peter Meinke Prize. Scott’s prose and poems has appeared in Denver Quarterly, Prairie Schooner, Indiana Review, Hayden’s Ferry Review, Ninth Letter, Salt Hill, Sonora Review, The Pinch, Spoon River Poetry Review, Bayou, and elsewhere. Other writing has been featured in the Best American Experimental Writing and Best New Poets anthologies. Scott’s accolades include being awarded a Lambda Emerging LGBTQ Voices fellowship, attending the Poetry Foundation’s inaugural Poetry Incubator, and being awarded residencies at the Millay Colony, the Edward F. Albee Foundation, and Writers at the Eyrie. Scott holds an MFA from the University of Alabama, where they edited and designed for Black Warrior Review.

Jacquelyn Stolos is a writer living and teaching in Los Angeles. She holds an MFA in fiction from New York University where she was a Writers in the Public Schools Fellow. Jacquelyn has won fellowships to attend the New York State Summer Writers Institute, the Community of Writers, and the Bread Loaf Writers Conference. Her short fiction has appeared or is forthcoming in The Atticus Review, Conte Online, Bodega Magazine, No Tokens and more. Edendale, published by Creature Publishing, is her first novel.