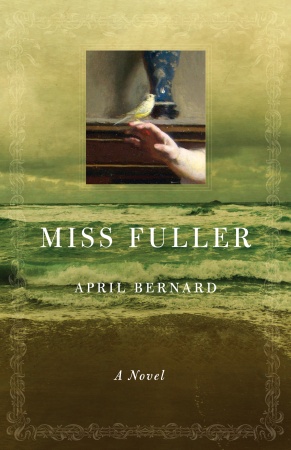 In simplest terms, the question with any book review is “should I read this book? Is it worth my time?” The answer: yes! The question might go a little deeper. Does this book do something for me? Again, yes! April Bernard’s Miss Fuller is a must-read if you’re a fan of historical fiction, a lover of beautifully printed small format novels with gorgeous cover design, or if you’re interested in early American writers like Hawthorne, Thoreau, Emerson, and of course the controversial early feminist, Margaret Fuller. If your interests are exclusively in structure and story arcs, this novel’s a gem.

Margaret Fuller, like many characters within April Bernard’s novel, was a real character in life. The novel opens after her trip to Europe to cover the failed Italian revolution of the 1840’s for the New York Tribune, and as she is returning to America with her new son and husband, a penniless Italian Count whose war injuries have damaged him physically and mentally. The family must take a merchant ship instead of a passenger liner across the Atlantic, and a series of illnesses coupled with terrible weather take a toll on all aboard. Almost within sight of the American shore, the boat is shipwrecked and Fuller and her family drown. The question now is what exactly drove her to Europe in the first place, how welcomed would she truly be upon return, what is the true nature of her marriage and family, (indeed what is an Italian like – quite an unknown entity in 1850, USA), and most importantly, where is her final manuscript, if not at the bottom of the sea?

Henry David Thoreau, her trusted friend, is sent to the beach to look for answers. At this point, the reader has been treated only to an awkward introduction of Miss Fuller in person, when Thoreau’s younger sisters Anne and Helen go to a Boston women’s society event to hear Miss Fuller speak. Anne is underdressed, spills her tea, and likens herself to a monkey in the formal room—clearly a flawed and sympathetic narrator. Miss Fuller pedantically preaches about women’s rights. Her audience is appreciative, however, if not entirely moved to action. Anne’s sister Helen tries to sway the group’s interest toward the abolitionist cause, which Fuller agrees is related to women’s rights, though she does not allow her audience to refocus their attention. It seems she’s a dynamic if not wholly enjoyable speaker to hear. Perhaps her writing, though we haven’t read it yet, is therefore more persuasive than her presence at the podium.

Read her, we will. The novel’s titular character is drowned in the first paragraph, but her story is very much alive as it is revealed through letters recovered or discovered at opportune moments. Henry produces an early letter for his sister Anne who examines Miss Fuller’s large, looping hand-writing and says, “A letter is a very live thing, isn’t it?” In this clever line of dialogue, April Bernard has stepped into the role of Anne Thoreau, and the reader is compelled to answer the question posed to Henry. Yes! A letter IS a very live thing. Now let’s see some letters! And indeed, Bernard delivers the letters, bringing Miss Fuller fully back to life, even in her dead and dismembered condition on a sandy beach.

Some letters, such as three Fuller evidently sent to her dear friend Sophie Peabody Hawthorne (married to Nathaniel Hawthorne) are never read by the intended recipient, nor the novel reader. Evidently, there is yet another letter to Sophie, but Nathaniel Hawthorne writes to Henry on August 18, 1850, to say:

To put it plainly: Neither my wife nor I has any wish to receive, and most certainly will not read, the letter you describe. Do oblige me by disposing of it in the nearest stove. I can only wish you had not troubled to fish it out from the sea… Thrice in recent months I have been obliged to intercept letters from that woman to my wife.

That woman! We now understand what Nathaniel Hawthorne thought of his so-called transcendentalist colleague Margaret Fuller. And if his young wife Sophie loved Margaret Fuller as we are encouraged to believe, we also know where the Hawthornes stand on the subject of feminism. (An idea which brings me to reconsider my own high school studies of The Scarlet Letter as well. So much for Hawthorne’s progressive thinking on behalf of Hester Prynne!) April Bernard’s readers can only hope the letter to Sophie now in Henry’s possession will be spared the dreaded stove and that we may be granted an opportunity to know its contents—and also its impact.

Toward the novel’s close, it seems that April Bernard once again steps into the role of Anne Thoreau.

The day following her Harvard visit Anne drove her pony-cart to the public library in Concord, to borrow The Blithedale Romance, the novel of Hawthorne’s she had learned was supposed to be about Miss Fuller.

It seems the line could as easily read: April drove her car to the university library in Saratoga Springs to pick up The Blithedale Romance… Point is, April Bernard has studied these works, has gotten herself on intimate terms with these well-known authors and figures. They’ve informed every word of fiction she’s peppered in to an otherwise historically accurate tale. Clever.

Margaret Fuller Ossoni, although not a well-known character among writers of that time, is still a powerful voice and a fully engaged historian, fearless in her writing and in her participation in revolutionary events. As with any revolution, there is destruction, controversy, a push-pull tide of emotion, and allocation of resources. What appears to never waver is Margaret Fuller’s commitment to her cause, even when her personal life and her personal interests might demand her attention elsewhere. Her story is a fascinating one that may have had much more impact on early American literature than most people would likely realize.

A little later, carrying a pot of tea and a plate of cold pork, pickles, and green beans, Anne returned to her work-room. She re-read the pages by lamp-light, while the expected storm crashed around the house, briefly. At last she went to bed.

Here, it’s the Miss Fuller reader who wants to step into the role of Anne Thoreau. If I didn’t have this review to write up for Necessary Fiction, I’d be enjoying the impending storm over my own house, hunting for a jar of pickles in the back of the fridge, eager to settle in to start reading this book again from the start.

April Bernard is an American poet. She was born and raised in New England, and graduated from Harvard University. She has worked as a senior editor at Vanity Fair, Premiere, and Manhattan, inc. In the early 1990s, she taught at Amherst College. In Fall 2003, she was Sidney Harman Writer-in-Residence at Baruch College. She currently teaches at Skidmore College in Saratoga Springs, New York. Her work has appeared in The New Yorker, the Boston Review, AGNI, Ploughshares, Parnassus, and The New York Review of Books.