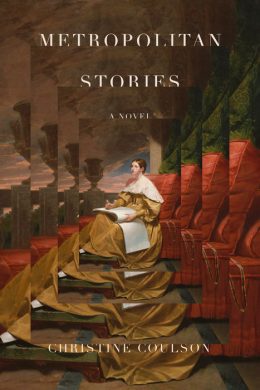 After working at the Metropolitan Museum of Art for almost a quarter of a century, Christine Coulson took a year’s sabbatical to bring together the volume now published as Metropolitan Stories. A well-received article “Behind the Scenes at the Met,” published in April 2016 in the New York Times Style Magazine, had introduced many of the themes of her new stories, in particular her fondness for the “hidden spaces [of the Met] and the people who occupy them.” That article and now this book focus on the magic of these unseen spaces.

The stories in the volume are linked essentially by place (the Museum), set during the time of the author’s employment (with flashbacks) and they share some characters. But the Met is more than a place: it is a culture, a family, a shared history/collection – with all that that implies/entails of relationships. After 25 years there, the author has a vast collection of incidents, happenings and non-public details that she sympathetically and wittily describes. The Met as an institution offers the same fascination, it appears, as Downton Abbey and Upstairs/Downstairs where different classes of society co-exist and viewer/visitors are ever eager for more details about life they have not personally experienced. With stories featuring management and staff at all levels, patrons and donors, individual artworks, galleries and of course the general public as visitors, Coulson’s subject matter is unlimited. What really goes on? She gives free rein to her imagination.

In the first story “We” are the staff members: “We protect them and save them and study them.” Its pendant, “Object lesson”, is the next-to-last story: “’We’ are the art, the evidence, the beauty that these walls are built around.” In between are accounts by pieces of art. For example, “Chair as hero”: “Hi, I’m a fauteuil à la reine made for Louise-Elisabeth, Duchess of Parma” or “Adam”, the 506-year-old statue that moved. In 2002, the Tullio Lombardo statue of Adam at the Met did mysteriously fall off its pedestal one night. The museum’s spokesman said, “We are reasonably certain that it collapsed inexplicably but on its own.”

Many stories have a basis in reality: a visit by Karl Lagerfeld, the loan of the Mona Lisa, the wonderful description of Jim Campbell’s Motion and Rest #2 (a proposed acquisition). These ‘historical’ events provide credence, should it be needed, to the collection as a whole. The reader is drawn in, almost voyeur-like, by intimate details of characters and relationships – be it the amorous antics of guards Radish (a recurring character) and Maira, jealousy over gallery space (Nick Morton) or the (over-) eagerness of young interns.

Ghosts also feature in various stories. One wonderful apparition stars in “Big-boned” as an under-drawing for Tintoretto’s Miracle of the loaves and fishes who works as a cashier in the staff cafeteria. What better place to hear all the news and gossip of the institution?

The talk stretches between tables and across departments to keep inaccurate stories alive. These tales swell into a shared mythology. I’ve overheard them all: covert romances, dubious decisions, demanding donors, the night-shift antics of a guard called Radish.

The “shared mythology” is the stuff of this collection where the author offers to a wider public the overhearings from “Big-boned.”

Management figures and processes are not excluded from these tales, accurate or not. “Musing” amusingly describes panic in the Director’s office. “Gift Man” shows the lengths to which a museum might go to acquire a donation: “The Met plays the game with gusto and skill: 85% of our collection has come to the museum by gift. We want these paintings. We want them with an itchy, greedy, determined kind of desire.”

The two deaths that occur in Metropolitan Stories are treated with dignity. In “Lost”, Melvin, who has recently lost his job and is pretending still to be employed, takes refuge inside the Met where “the bright, light-filled interior offered more anonymity than the steps.” He simply dissolves into one of the rooms in the Lehman wing, consumed by its overwhelming beauty. The second death occurs in the final story, linked to “Lost” through custodian Walter who was cleaning the steps when Melvin entered the museum. Walter finds the body of Rubber Band Man (previously mentioned in “Big-boned”) in a basement passageway and tenderly, sympathetically carries him: “Walter found the loneliness of this singular procession heartbreaking, and felt a wet patch of a tear slip down his cheek … He didn’t even know the Rubber Band Man’s name.” And from pathos to absurdity: RBM is called Constantine Srossic – a name the President consistently mangles into “Sewersick.”

RBM’s unknown and unseen expertise in bag distribution for all the Met’s sales points is rapidly missed “and chaos gripped the Museum shops.” Enter Edith, a young, eager woman who sees the project

as an opportunity to stand out among her colleagues. Armed with her master’s degree in art history, she would crack the paper bag challenge.

Edith knew that life at the Met had long followed this course: you got your chance, took your shot, and committed yourself to your minor role within the masterpiece. It was like the great studios of the Renaissance masters, she thought. And she was in charge of painting the ankles.

Christine Coulson’s career at the Met started with an internship in the European Paintings Department (the ankles perhaps) and she progressed through the Development Office, the Department of European Sculpture and Decorative Arts and the Director’s Office. She was clearly privy to many “behind the scenes” discussions that provide the background and details for her stories. Readers have the impression of better knowing what goes on inside a major museum, sharing some of its secrets perhaps and certainly some of its gossip.

But Metropolitan Stories has the subtitle: A novel. Is this a contradiction in terms? Would a potential reader have different expectations for a collection of short stories or short-story cycle than for a novel? Is the reading experience different? The difficulty of this initial juxtaposition is not resolved The 16 stories are loosely connected, essentially through setting. Their quality is varied. The most successful stories stand alone and stay with the reader. But by usual definitions, this is not a novel.

Christine Coulson began her career at the Metropolitan Museum of Art in 1991 as a summer intern in the European Paintings Department. She returned in 1994 and, over the next 25 years, rose through the ranks of the Museum, working in the Development Office, the Director’s Office, and the Department of European Sculpture and Decorative Arts. In 2019 she left the Met to write full-time.

Susan Jupp has worked in academic publishing in Canada and France and as an editor and communications specialist in international non-governmental organizations. She lives in Switzerland.