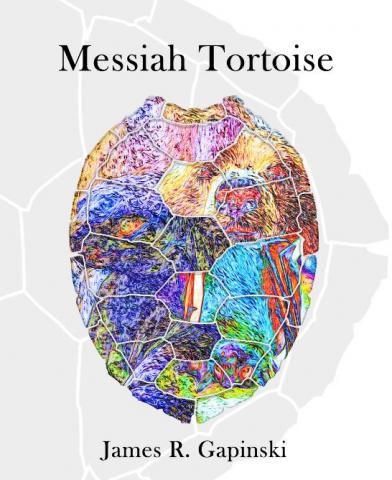 At its essence, James R. Gapinski’s Messiah Tortoise is a brief, yet intriguing collection of absurd narratives that take place in zoo settings populated with a diverse array of animals and zoo staff. With each quick story in this colorful menagerie, Gapinski captures readers with his knack for unusual points-of-view, startling predicaments, and unique detail.

“The Contortionist” tells the story of a pliable performer enacting her talents in front of caged spider monkey for reasons only known to her. Gapinski writes, “For her, contortion was about peace with one’s own body. It wasn’t a spectacle to be ogled. It was personal.” However, as the spider monkey effortlessly imitates the contortionist and challenges the very idea of skill, the increasingly agitated contortionist’s ethos is called into question. In this way, “The Contortionist” achieves what other stories in the collection are also in conversation with: the deeper tensions that exist between spectators and spectacles, between humans and non-humans, and even between who we are versus who we believe ourselves to be.

While the theme of civilization clashing with nature runs prominent through Messiah Tortoise, a crowning aspect of the collection is its willingess to play with perspective. In “Zoo Operator’s Checklist,” a seemingly mundane note-to-self serves to illuminate the emotional aches of a zoo’s oft-overlooked employee. As the protagonist of the narrative completes his daily task list, his mind begins to drift into unsettling daydream and remembrance: “…break the knob off the train lever; the cliff is just ahead; reorient yourself in your childhood bedroom; hide your revolver because Mom is doing a gay porn check; don’t let her send you back to another one of those camps; tell her it’s okay because the cute guy dies twenty years from now…” In a burst of emotionally-wrenching momentum that’s rare to find in a narrative list, Gapinski pushes the possibilities of flash fiction even further.

Though not every story in Messiah Tortoise develops into a piece as affecting as “Zoo Operator’s Checklist,” the collection is notable for its desire to probe into the interior lives of the overlooked and to give them a voice. The chapbook’s final story, “Tire Swing,” exemplifies this characteristic well. It tells the story of an orphaned chimpanzee who grapples with grief following his mother’s death while also contending with the zoo’s introduction of a new, unfriendly chimpanzee, Chike, in her place. After a series of disheartening run-ins with the aggressive Chike, including a fight over a tire swing, the young narrator of the aptly-named “Tire Swing” discovers a way to outwit his rival while also reconnecting with his mother’s memory. The memory? His mother’s prized view from atop her favorite tree in the chimpanzee enclosure. When the young chimpanzee finally experiences the view his mother saw during her life,— surprisingly, a freeway choked with vehicles or, to the narrator, “all the tires anybody could ever want to play with”—he doesn’t hesitate to call it “heaven.”

And indeed, this is what Messiah Tortoise gifts its readers with: a sense of divine within the ordinary, an inventive interplay between the wild and the tamed.

James R. Gapinski holds an MFA in Fiction from Goddard College and an MA in Postmodern Literary Studies from Prescott College. He’s managing editor of The Conium Review and Conium Press and an instructional specialist at Chemeketa Community College. His short fiction has appeared in The Collapsar, Hobart, Juked, Monkeybicycle, Paper Darts, Psychopomp, SmokeLong Quarterly, Word Riot, and elsewhere.

Nicole Rivas (@nicolemrivas) is a writer based in Savannah, GA. Her chapbook of flash fiction, A Bright and Pleading Dagger, was the winner of the Rose Metal Press 12th Annual Short Short Chapbook Contest. Other works have appeared in Newfound, The Journal, The Cincinnati Review, and elsewhere.
Share This