Meet Behind Mars by Renee Simms 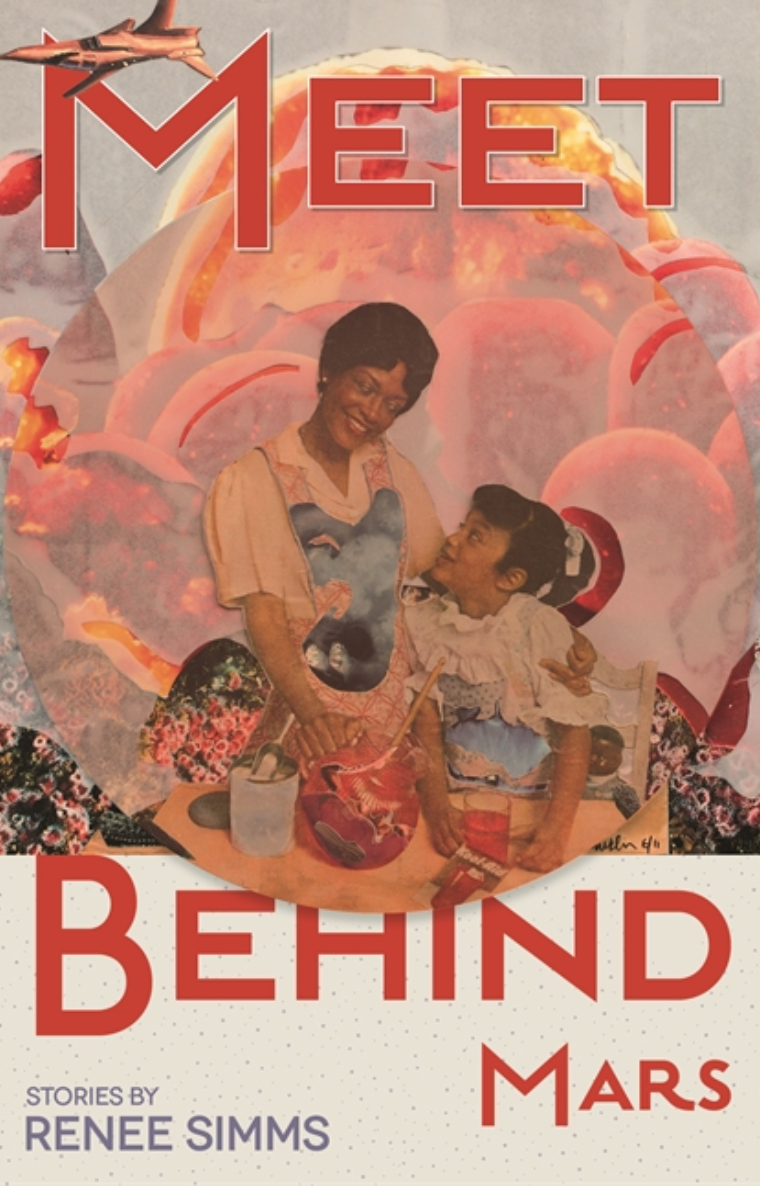 The stories in Renee Simms’ debut collection Meet Behind Mars don’t take place on another planet. They aren’t magical realism, or science fiction, or supernatural. Instead they center on Black women who are on their own frontiers — and only one of them involves the actual atmosphere.

That story is “Rebel Airplanes,” in which a woman with late-stage lung cancer who works for the city of Los Angeles as an engineer by day obsessively pursues a project of building a model airplane that she hopes to launch above the atmosphere. Her quiet, intense drive interrupted by loss of physical control is as poetic as it is devastating.

Like the protagonist from “Rebel Airplanes,” the women in the rest of Simms’ stories are similarly funny, smart, and complicated. In “Dive,” the protagonist returns home to her adoptive parents; in the tension between her and her father, she both empathizes with and is irritated by his drive to “find meaning in the world” and make “a secure life” by obsessing over a pond ecosystem. His feeling of security on the water is her uncertainty; his delicate approach to nature is her lumbering ambivalence. “I have never shed dainty tears like some of the sweet frightened girls,” Simms writes. “Mom said I cried like a person clawing her way out of a grave.”

In “The Cows of Lantau,” the narrator is the head of a committee planning a high school reunion who compares her former classmates to a herd of tethered cows. She wonders how this herd would navigate explicit questions of racism, sexism, police brutality, even mortality itself; she asks herself, What would it mean to break free?

Simms explores themes of loss and the messy process of moving on from it across this collection. In “You Can Kiss All That Bye-Bye,” a former dancer who never fully recovered from an injury – “an almost-made-it type of thing” – visits her parents as age begins to reveal more clearly their entrenched routine obsessions, their shrinking worlds that are simultaneously so big. “She has questions,” the narrator says of her mother. “She has a lifetime of concerns.”

Loss is also at the forefront in “The Body When Buoyant,” in which a woman loses everything – including her mother – in Hurricane Katrina. In the aftermath, she tries to rebuild a sense of herself and of a life while living with her brother and sister-in-law. She badly wants a new home and finds herself desperately focused on one particular house, taking it a little too far (with very little forgiveness from a system that places Black bodies below white ones) as she works her job caring for an old Japanese man. Their tender, spare relationship is at the heart of this story that nevertheless refuses to shy away from the harsh realities of the circumstances that bring them together.

Perhaps the most devastating stories are “American Industrial Physics” and the title story, “Meet Behind Mars” (after a lyric in the 1978 Cheryl Lynn song “Star Love”). Both are written in epistolary form, which seems to be a real strength for Simms. The former describes the eviscerating emotional toll of veterinarians working with chimps at a crash-test facility; the latter outlines with fierce, witty, and raw voice the micro- and macro-aggressions of an Oregon school system against a single Black mother and her son. These two stories are perhaps the strongest in an overwhelmingly strong collection that covers a wide range of characters and plots in such a short amount of time.

Renee Simms crafts stories that are so potent that they take up very little space on the page, but her characters are fully realized. The reader learns so much about them through the right details and tightly crafted narratives. The inner and outer lives of the women in these stories are as gripping as an action movie and as immersive as the best character drama, but these stories aren’t noisy. They’re acute, weird, broad, breathtaking, and beautiful.

Renee Simms (@renee_e_simms) is a writer and Associate Professor at the University of Puget Sound.

Sarah Neilson (@sarahmariewrote) is a blogger and book reviewer based in Seattle.